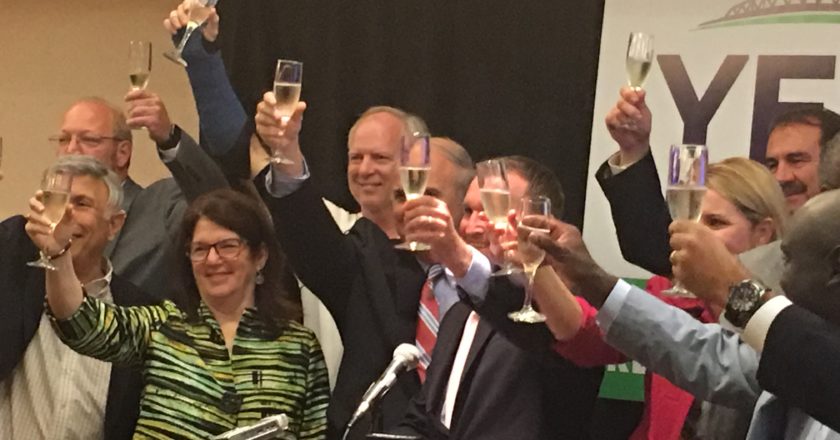 Jacksonville’s long road toward the latest round of pension reform – the Lenny Curry edition – is finally entering the home stretch this week.

While last week saw the introduction of 14 total bills related to the various agreements struck with the city’s bargaining units after months of negotiations, this week sees council attempting to come to terms with the specifics of the Curry proposal.

The mayor’s office has been very slow to offer specifics, having what the mayor and numerous council members describe as big-picture, conceptual meetings, while Team Curry promises to roll out numbers at a Thursday workshop

Tad Delegal, who served as a counselor to Jacksonville’s Fraternal Order of Police for 14 years, did a deep dive into the numbers for police and fire unions – and his work claims that the Curry plan will cost the city an additional $662M from 2017 to 2031.

Delegal’s numbers are based on certain assumptions, including a 25 percent pension cost for new employees (and a 25.9 percent cost for current ones), and a 3 percent growth in payroll costs per annum.

However, his analysis asserts that the mayor’s plan will cost the city $20M more in pension costs in FY17, with a gradual increase to over $62M by FY31.

In a roughly $1.1B operating budget, those are big hits. And Delegal isn’t even factoring in general employees.

Those numbers differ from the more optimistic analysis put forth by Milliman in 2016.

That analysis, based on a 10 percent city contribution rather than the 25 percent contribution, created room for the city to move.

By FY 19, that number expanded to $57 million of saving, setting off a number of fiscal years with projected savings ranging from $55 million to $68 million.

In FY 35, the trend reversed, with increased city spending on the liability, ranging from $14 to $31 million for the rest of the decade.

Delegal, who is not a CPA, asserted that he was “concerned with the lack of financial analysis accompanying Mayor Curry’s pension plan, especially since it represents such an enormous change in the way that a substantial portion of our City’s finances are administered.”

With that in mind, he took a stab at it.

“The real savings with the 2015 plan comes in the future, and adding increasingly more employees at the 12% rather than at 25.9% will result in an eventual decrease in pension costs, even with expected payroll increases.  The Mayor’s plan would prevent the savings that would have accompanied the move from 25.9% (25% for post-2017 employees) to 12% of payroll.  The Mayor proposes to pay these new employees with a 401k-style benefit that costs 25% of payroll,” Delegal notes.

That, Delegal asserts, “effectively eliminates the savings that the 2015 reforms created.   Those employees will comprise an increasing percentage of the police and fire workforce, and while continuation of the 2015 plan would have created a substantial savings over the next fifteen years (and into the future), Mayor Curry’s plan will result in a net increase in pension costs over time.”

Delegal also asserts that “Additionally, the 2015 plan created substantial cost savings through reduction in benefits for other employees, especially those who had fewer than ten years of service as of 2015 … The 2015 reforms made revisions to not only the pensions of persons hired after 2015, but also those who were already hired before that date.”

“The task force predicted that the changes would decrease the City’s liability for these employees by about 7% of payroll for that group of employees. Assuming that these employees are compensated at the average salary, Mayor Curry’s plan will therefore increase the costs of their future benefits by approximately 7% of payroll, or approximately $4.3 million a year,” Delegal continued.

Delegal also contends that more costs that could have been avoided will emerge.

“It is unclear how much money the Mayor plans to save in the annual budget as a result of delaying the contributions to the unfunded liability.   In order to justify the much higher annual payroll and pension costs listed on the attached spreadsheet, Mayor Curry will have to reduce the unfunded liability payments by a much greater annual amount than is required under the ordinance,” Delegal argues.

“It is unclear how much Mayor Curry’s plan would decrease the unfunded liability payments between now and 2031, but the reduction in payments will result in a higher unfunded liability than would exist had regular payments been made, and had the funds been permitted to gain value over time through investment.  If the Mayor plans to refrain from paying $100 Million each year until 2013, the total amount of “interest” (earnings that would have been made on those payments at 7% return) would total approximately $470 Million by 2031,” Delegal notes.

Consistent with the heads of the police and fire unions, Delegal expects impacts from workforce attrition among public safety.

“The Mayor’s plan uses a very high contribution rate of 25% of payroll, along with extremely high raises in an attempt to counteract the turnover effects that have been experienced by the other places that have used 401k-type systems for public safety officers.  His use of the high dollar benefits could cause employees to stay, but the fact that their retirements will be portable could also spur them to leave the very demanding, high pressure jobs after five years of vesting.  If the plan results in higher turnover after five years, Jacksonville will have no choice but to further increase pay and benefits, which will be quite expensive,” Delegal contends.

“In future downturns, the implementation of a 401k-type system will force the City to be much more attentive to the market, and will require it to increase salaries and benefits more quickly during any recovery.

Delegal’s analysis is restricted to the police and fire plans, as well, necessarily leaving out general employees.

Meanwhile, he posed a number of questions for council.

Among them: the cost of restoring benefits for all of those under the current defined benefit plan to 2015 levels; the cost of administration and disability benefits under the plan; the cost of the 3 percent bonus, and the phased in 20 percent raise over three years; the rationale for an assumed 4.25 percent annual growth in surtax revenue; impacts of losing $75 million scheduled to be paid into the pension fund, per the 2015 agreement.

This outlet has asked Curry and his team for tangible projections for weeks, if not months, but delivery has proven elusive.

But with the bargaining process wrapped, the administration still isn’t rolling out numbers for public consumption, deferring to the workshop slated for Apr. 6.

“In the weeks ahead, in a big, public, transparent workshop,” Curry told us on Tuesday, “we’ll be laying all of this out.”

“I would remind you that all of the collective bargaining, all of the agreements that have been reached, were done in the sunshine — transparent for the public to see.”

That workshop, slated for Apr. 6, will “lay out the budget impact and the actuarial impact … everything that council needs to make a decision will be laid out for them publicly and you’ll all have that information available for you,” he told the press Tuesday.

Legislation introduced Tuesday came without any data beyond the actual bill.

Ordinance 2017-257, which would levy (no later than 2031) the 1/2 cent discretionary sales tax approved by voters via referendum in August, and which creates a new ordinance section:  Chapter 776 (Pension Liability Surtax), had a fragmentary description on the legislative fact sheet.

“This ordinance is required by law to implement the Pension Liability Surtax.”

The bills impose a “ten-year agreement,” of sorts, able to be revisited on a bilateral basis three years, six years, and nine years after implementation.

The fact sheet, again, is a sad pastiche: “This ordinance implements the changes pursuant to collective bargaining” is all it says, leaving aside the usual detail one expects from such documents.

While Delegal’s analysis is not the final word on the matter, it is given more weight than it might be otherwise, were the Curry administration forthcoming about the projections.

In this context, a release of financial projections – perhaps ahead of the Thursday workshop – would offer a meaningful counter to a narrative that suggests that the city is in for some years of austerity – even after the so-called “pension tax” was masterfully marketed and approved by Jacksonville voters overwhelmingly last August.