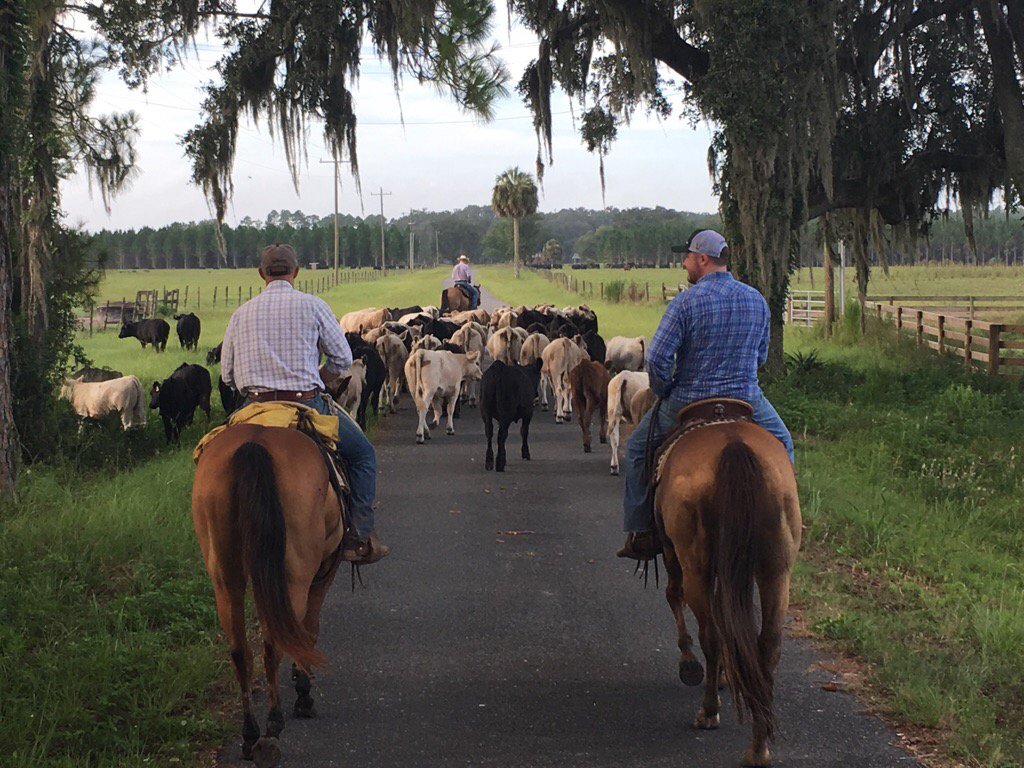 He worked for free on a ranch in Immokalee before he ran for office, telling the owner to call him know whenever there was something to do. The North Fort Myers resident wanted to learn more about the businesses and get a better understanding of the industry.

“I built a lot of fence line for free,” joked Caldwell about his previous experiences.

Made famous by Bob Graham, the state’s former Democratic governor and senator, work days are a political tradition in the Sunshine State. Graham made them a staple of his political career, as is his daughter — Gwen Graham, the former U.S. representative and Tallahassee Democrat now running for governor. Gov. Rick Scott held several during his first term in office, including selling doughnuts and working as a park ranger.

The most recent workday brought Caldwell to Usher Land and Timber in Chiefland. Owned and operated by Lynetta Usher Griner and Ken Griner, the logging and cattle company has been operating in Florida in one shape or form since the 1900s.

The Usher family got its start working in the turpentine business in North Florida in the early 1900s. In the 1940s, E.T. Usher Jr. opened a logging business in the same area. After he married Helen Hiers, the couple began acquiring acreage for a farm and began running cows. The couple’s son Tommy Usher joined the family business in 1984.

Usher Griner and her husband came on board in 1989, and the company has operated as Usher Land & Timber since 1992.

The company’s cattle operation is unique, Caldwell said, in that it participates in all phases of the industry, essentially handling the cow from conception to consumption. Most operations in Florida raise calves until they are about six months old, before shipping them to another facility where they are prepared for slaughter.

“They’re part of a group trying to finish the cows in Florida,” said Caldwell. “That’s a different way of doing it, and it looks to me that they have a successful idea.”

Caldwell said about a half dozen ranchers in Florida are in the group, and the Seminole Tribe of Florida also has a similar process.

Florida ranked 10th nationwide in beef cow inventory as of Jan. 1, 2016 with 915,000 head of cattle, according to the U.S. Department of Agriculture’s National Agricultural Statistics Service. That accounted for about 3 percent of the total nation’s total inventory.

But Caldwell said Usher Land and Timber stands out among its peers because in addition to its cattle operations, it also has timber operations. And that decision to use their acreage for multiple uses, Caldwell said, allows them to find a higher rate of return, especially as land prices continue to rise.

Caldwell said he was up at 5:30 a.m. working with the cows as the sun was coming up. He spent a few hours working with the cows, before getting a chance to try his hand at the timber operations. On the timber side of things, he spent some time with workers who were cutting pine timber, even operating the heavy equipment and loading trucks for mill delivery.

“I’ve never worked that level of equipment at the timber site,” he said. “That was absolutely awesome.”

Caldwell’s workday also included a stop at the Suwannee saw mill in Cross City. The company was founded in 1954, but Caldwell said a mill has been in that community for many more years. Caldwell said he got a chance to tour the mill, meet with company leadership and got a better understanding of the scope of the industry as a whole.

More than 5,000 items are made from forest products, ranging from furniture to pharmaceuticals, according to the Florida Forestry Association. The association estimates the forestry industry employees nearly 77,000 Floridians and has a $16.1 billion impact on the state’s economy.