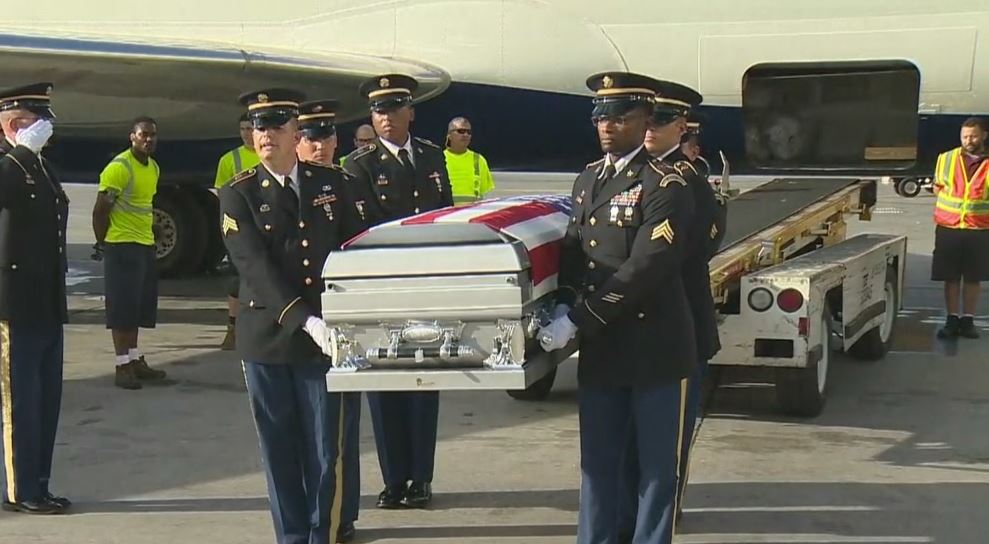 A sad spectacle playing out now will hopefully fade from the spotlight of cameras and the front pages of print media. It can’t happen soon enough.

By now, most know the story that Trump telephoned the widow of Army Sgt. La David Johnson, killed during an ambush in Niger, to hopefully offer some words of comfort. We also know the widow, Myeshia Johnson, did not take the president’s attempt to console very well.

Especially the part where Trump said “he knew what he signed up for, but it still hurts.” Johnson also said she did not like his tone and the president could not remember her husband’s name.

The following day, Kelly, the president’s chief of staff, came out to the White House briefing room. As he detailed how a fallen military member is removed from the battlefield and eventually arrives home, one could have literally heard the proverbial pin drop.

Kelly then went on to express his dismay at how the solemn, somber process of honoring a fallen soldier had become politicized. He proceeded to disparage Wilson, without mentioning her by name, and misstated her role at a South Florida building dedication in 2015.

Heroes are hard to find in this story.

Trump was already behind the 8-ball before the call to Myeshia Johnson ever took place. When asked about his plans, Trump claimed past presidents did not make the calls he would soon make.

What purpose did it serve to say that?

It gave him no capital to defend the controversial remark about “he knew what he signed up for.” The president was advised to say something like that from Kelly, who received that very message when he lost his son in Afghanistan.

Trump may have had difficulty with his tone, as Johnson said, but the message is accurate. Adding, “but it still hurts” was supposed to help, but obviously it did not.

Who is old enough to remember Viet Nam when widows and families lost loved ones who had no choice but to serve in the Army, cross an ocean, and lay their lives on the line? They didn’t sign up for anything.

Kelly was on his way to restoring the meaning and the reverence of a returning fallen hero. That all came unglued when he accused Wilson of saying something she didn’t say.

What purpose did it serve to say that?

Wilson is demanding an apology from Kelly. For the factually wrong remarks attributed to the Congresswoman, she should get one.

At the same time, Wilson owes one, too. Not to Kelly, and certainly not to Trump, but to all who wish to keep the homecomings, the sharing of grief, and the remembrance of our returning heroes as one of the few moments where Americans can come together.

The reason we know about the phone call is because the Congresswoman publicly talked about it. That should not have happened and she is fortunate to not be sharing any of the blame for the spectacle.

Neither the president (and Twitter), nor Kelly, comes out of this unscathed. Wilson, who is famous for her hats, should have kept what she heard under it.

Which brings us full circle.

As it was on the day all of this became media fodder, the only hero in this story is Sgt. La David Johnson.