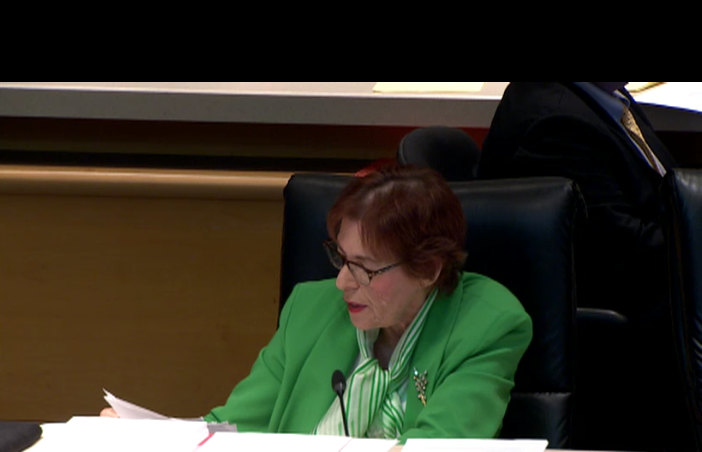 A controversial omnibus education bill made its first appearance Tuesday in the Florida Senate, where Port Orange Republican Dorothy Hukill unveiled a strike-all amendment to the legislation before the Education Committee.

The bill (HB 7055) ultimately was approved, although without a provision that organized labor said was designed to gut the state’s “right to work” laws.

The Senate bill keeps in most of the more controversial elements of the House version, including the Hope Scholarships for students who have been bullied. The estimated $40 million program would be paid for by people who buy cars making voluntary contributions for a tax credit.

The committee also supported an amendment by Fort Lauderdale Democrat Perry Thurston that would require school districts to implement a school resource officer program, in which officers would be trained by law enforcement on policies and procedures to deal with an active shooter on a school campus.

“We don’t think it goes far enough, but we think it will aid towards fortifying the schools,” Thurston said in introducing the amendment less than a week after the shooting at Marjory Stoneman Douglas High School in Broward County, where 17 were killed.

Naples Republican Kathleen Passidomo (who introduced the bill on behalf of Hukill before the committee) conceded Thurston’s amendment was friendly, but she added that it would be more appropriate to allow that program to be inserted into the comprehensive bill being proposed by Senate leaders Bill Galvano and Wilton Simpson.

Simpson disagreed. He recommended that the committee support it, which they did.

Hukill also added the provocative proposal passed in the House that would decertify teachers’ unions and force them to disband if membership falls below 50 percent of the employees they represent. That led to the most dramatic portion of the one hour and fifty-minute hearing.

Thurston added an amendment that would remove the union decertification provision from the bill, saying that it had never came before the Senate yet, and should be debated up or down on its own merits.

Fort Lauderdale Democrat Gary Farmer blasted the provision, calling it a “mean, spiteful attempt to take away the rights of workers.”

Rich Templin from the Florida AFL-CIO said the legislation would not give any power or add transparency to school teachers, but in fact take it away. And he said it would completely destabilize public education in the state.

Republicans on the committee asked for guidance on how many school districts in the state could be affected by the law, but nobody had that answer. Ultimately, Thurston’s amendment passed by a 5-4 vote.

Farmer then proposed that the bill be approved, stripped of the Hope Scholarship provision. That went down in defeat.

There was also a bit of contentiousness towards the end of the hearing, when senators had agreed originally called to be voted on by 12:50 p.m. When the senators weren’t prepared to vote until 12:52, Farmer parried an objection, prompting a call for legal staff to intervene. He then backed down and allowed the vote to be extended until 12:56 p.m.

The measure then passed. It will be held by the Senate Appropriations Committee on Thursday.

previousBaxter Troutman not running for Congress to replace Tom Rooney