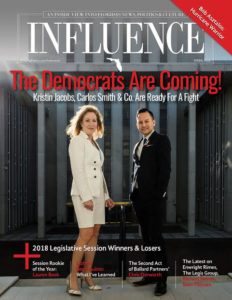 I’m not sure when it happened. Perhaps it was some time after Hurricane Irma struck the state, or around when another hurricane of sexual harassment scandals hit the Florida Legislature. But whenever it was, the last six months of Florida politics have been surreal.

And that was before a disturbed young man killed seventeen innocent souls at a high school on Valentine’s Day.

I have to be honest with you: It’s all really impacted me. Not in a physical way, of course, but the barrage of bad, breaking news has made a deep impression on me. And, believe it or not, it also made an impression on the focus and schedule of INFLUENCE Magazine.

This should be the edition in which we roll out the second INFLUENCE 100 listing the most influential people in Florida politics.

But right now isn’t the time for that.

As our reporters and our photographers reached out to those on the list so that we could tell their stories and take their pictures, there was resistance by some to being interviewed, to be photographed. And I admit it was awkward asking lawmakers to celebrate the influence of lobbyists and fundraisers at the same time they were putting together the most important piece of legislation passed in the last seven years.

So the INFLUENCE 100 is on hold for a few months. It will debut in late May or early June.

Meantime, so much is going on in the influence world (or, as the AP’s Gary Fineout likes to call it, the influence media), that we needed to get an issue out that captured what happened during the 2018 Legislative Session, as well as to many of the players who are part of The Process.

If one thing is clear post-Parkland, it’s that Florida Democrats — three decades removed from power — are gearing up for a monumental political and policy fight. The outcome of this fight will shape the influence industry for years to come. Several Democrats are on our list of Winners and Losers emerging from the Session, including our “Rookie of the Year” Lauren Book, a first-term state senator featured inside.

If Book is the newcomer to watch, Sen. Lizbeth Benacquisto is the veteran lawmaker to listen to. If you read one thing in the magazine, make sure it’s her first-person thoughts on the state of The Process.

The rest of the magazine is filled with a barrage of news and notes about dozens of other players, including Sen. Rob Bradley, Rep. Kristin Jacobs, former Rep. Chris Dorworth, Randy Enwright, Jim Rimes, and many others.

Some of those may well be in the INFLUENCE 100. Until then, ponder the contours of the new political landscape, coming to places — and pages — near you.