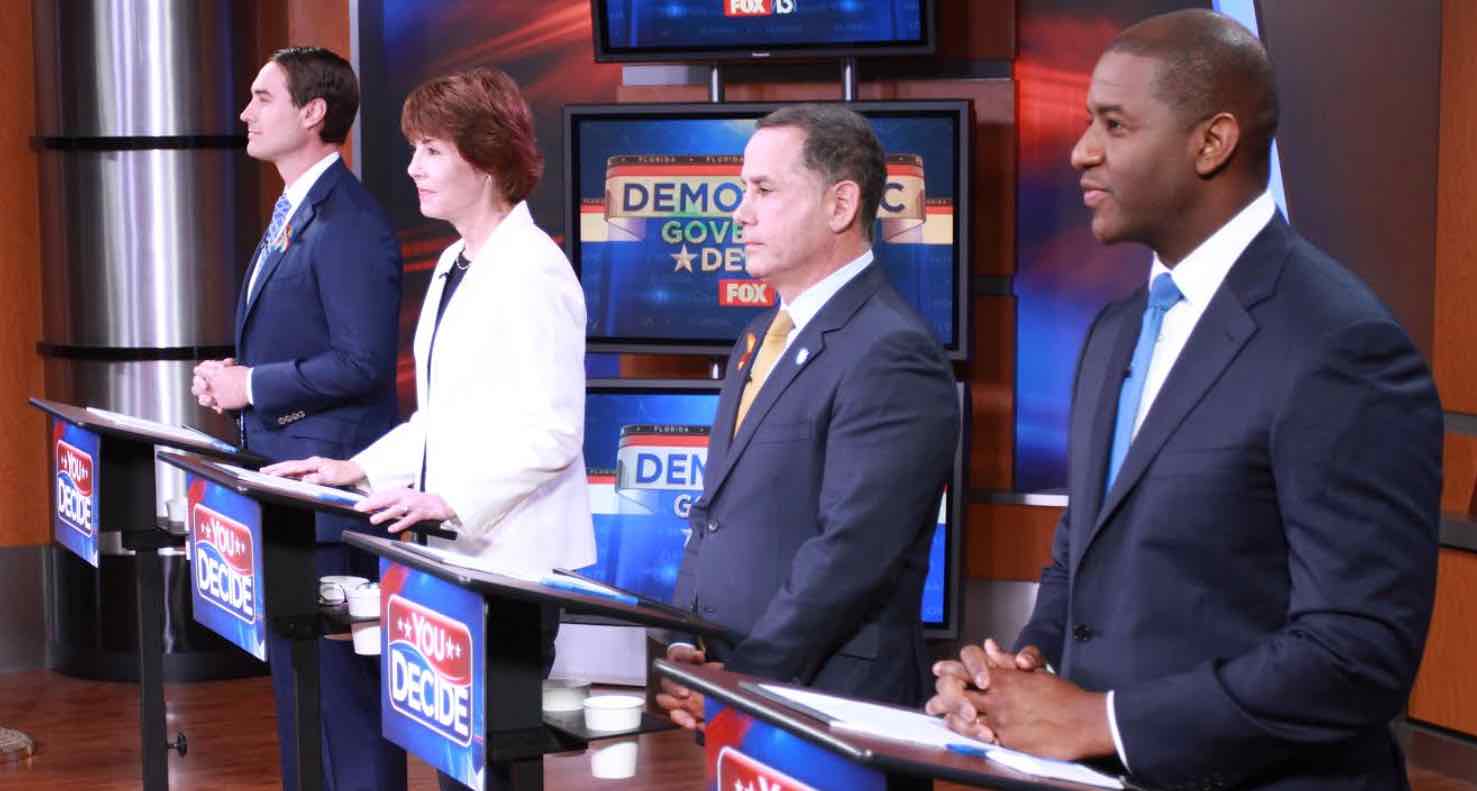 Here are some instant takeaways on the winners and losers emerging from the debate.

Adam Putnam, Ron DeSantis and the Florida GOP — If you are on #TeamPutnam or with DeSantis, you have to believe your political future will be decided in the primary because whichever Republican comes out of it should be able to dispatch any of the four candidates we saw today. Blue wave or not, Putnam’s encyclopedic knowledge of the state and its policies and DeSantis’ “training” on Fox News have both men better positioned than these candidates.

John Morgan — Is there any doubt that the Orlando trial lawyer would have mowed through this field? Hey John, qualifying is still two months away.

Andrew Gillum — I’m re-watching the debate as we speak and it’s hard to find a moment when Gillum was tripped up. I don’t want to sound like Joe Biden and extol how articulate the African-American candidate is, but damnit, he is — extraordinarily so. Gillum’s also passionate about (and perfectly attuned) to the issues of Democratic voters. He even came close to correctly answering the moderator’s question about the size of the education budget. He also went straight at Graham (like in this clip) in a way that was not condescending a la “Hillary, you’re likable enough.” He’s gonna have to do more of that to catch up in the polls.

Gwen Graham — We set the bar high for Graham going into today’s debate, and she cleared it. She was the disproportionate target of attacks from the other candidates, but she handled it all in a way that should enamor her with her base of female voters. Graham also displayed a comprehensive understanding of state policy — from environmental issues to tangential concerns, like the size of the Department of the Lottery. Her answer on health care policy, in which she referenced her husband’s battle with cancer, was the high point of the debate. Her biggest sin of omission was not correctly answering the question about the size of the education budget. She was a school administrator, for goodness’ sake.

Craig Patrick — The Tampa Bay media market is blessed with so much on-air TV talent that a journalist like Fox 13’s political director is almost taken for granted. Patrick did an excellent job of moving the debate along, while also making time for follow-up questions.

TV stations throughout Florida — If this debate is any indication, Philip Levine is not going to be able to ad buy his way to the nomination a la what Rick Scott did in 2010. But that doesn’t mean he won’t try. Levine’s mixed-bag performance in the debate will have him breaking out his checkbook soon enough.

Democratic voters — Yes, there was a gubernatorial debate. And it will be aired in the state’s largest media market. But will anyone really tune into a debate in April airing right before the local hockey team’s playoff game starts?

Philip Levine — None of these candidates is homespun the way Putnam is, but the knock on Levine is he’s too South Florida to win the middle and north parts of the state. So any time Levine can knock down this ridiculous criticism, it’s a win for him. And on this stage, Levine seemed like he was the most easygoing. He even looked like he was having fun. But maybe he’s having too much fun because he whiffed on a couple of questions he’s probably kicking himself about right now. He needs to do a little more homework before the next debate.

Geoff Burgan — In response to the Gillum communication director’s rapid responses on Twitter, one very prominent member of Florida’s media noted that he was “once again doing an amazing job of antagonizing the media.”

Janet Cruz — The Tampa Democrat is still the leader of the House Democrats and the party’s top candidate in the most important state Senate race in 2018. Her daughter is a former executive director of the party. But Levine whiffed when asked about her.

Bill Nelson — I’m sure he would have liked the four Democrats looking to replace Rick Scott to, you know, criticize Rick Scott more often. I’ll have to check the transcript but Scott and House Speaker Richard Corcoran came away from the debate relatively unscathed.

Tampa Bay Times — Not one of the four candidates, when asked what was the first thing they read in the morning, mentioned the state’s largest newspaper. Can you imagine Bob Graham, Jeb Bush, or Charlie Crist not mentioning the Times?

Chris King — The Orlando entrepreneur said the first thing he reads each day is this website’s archrival, The Sayfie Review, which typically isn’t updated until 6 a.m. or later. So we presume he’s not reading our Sunburn — the morning email of what’s hot in Florida politics — which comes out on most mornings at 4 a.m. and has included blurb after blurb about King, who, up until today, we had a soft spot for. Not anymore. You name-check our rivals during a debate and you can count on me name-checking your rivals as often as possible.

previousJoe Henderson: Gwen Graham shows she can take what 'the men' dish out