The Democratic primary in Florida’s 5th Congressional District, a scrum between the Tallahassee incumbent Al Lawson and former Jacksonville Mayor Alvin Brown, looks to be a test of whether Duval Democrats can take back the district against Lawson, a genial career politician with friends on both sides of the aisle.

The battle has been one of dueling press releases on issues ranging from gun control to Lawson’s willingness to work with President Donald Trump, but with roughly two months before the primary, ground game is becoming a factor.

To that end, both Brown and Lawson are in the process of getting their campaign headquarters up and running. And predictably, those efforts are concentrated initially in each candidate’s geographic base.

Mayor Brown will be in attendance Thursday evening at his campaign headquarters (900-15 Dunn Avenue) for an event intended to engage campaign volunteers. That kicks off at 6 p.m.

While grassroots support is key, so too is the support of the Jacksonville money class. Though it has been slow in coming, Brown (as first reported by Florida Times-Union journalist Nate Monroe) is slated to have Jacksonville Jaguars owner Shad Khan host a fundraiser next week.

Khan, who supported Brown’s re-election campaign heavily, has not made a habit of supporting electoral challengers in local races. His preference has been to support incumbents with whom he can partner, so the decision to go against a sitting incumbent (one well-regarded by many in Jacksonville’s political class) is worth noting.

In addition to Khan, the host committee via the invite obtained by Florida Politics features dozens of Duval’s heavy hitters.

From Jacksonville University President Tim Cost and Gary Chartrand to trial lawyers Eddie and Chuck Farah to traditional Republican money men like John Baker and John Rood, what’s clear is that some of the power elite is backing their local candidate, even if Republican office holders like Mayor Lenny Curry and Sheriff John Rutherford seem to lean Lawson’s way.

Lawson is making moves of his own, opening a campaign headquarters in Tallahassee Saturday. That event is at 225 East Jennings Street from 3 p.m. – 6 p.m.

Lawson this week also pocketed a key endorsement from the western side of the 11-county district, via Gadsden County Sheriff Morris A. Young.

“Congressman Lawson has been dedicated to North Florida for a number of years,” Young said. “I have watched him grow as a state representative, state senator and, now, congressman. I am proud to know him. He is doing a great job in Washington.”

Ultimately, Brown will have to convince people west of Jacksonville that Lawson should be replaced. He will need endorsements and infrastructure west of I-295 to counteract the incumbent, who has gotten one key Jacksonville endorsement from the Fraternal Order of Police.

Brown didn’t even make a play for that endorsement. 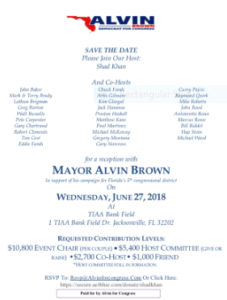