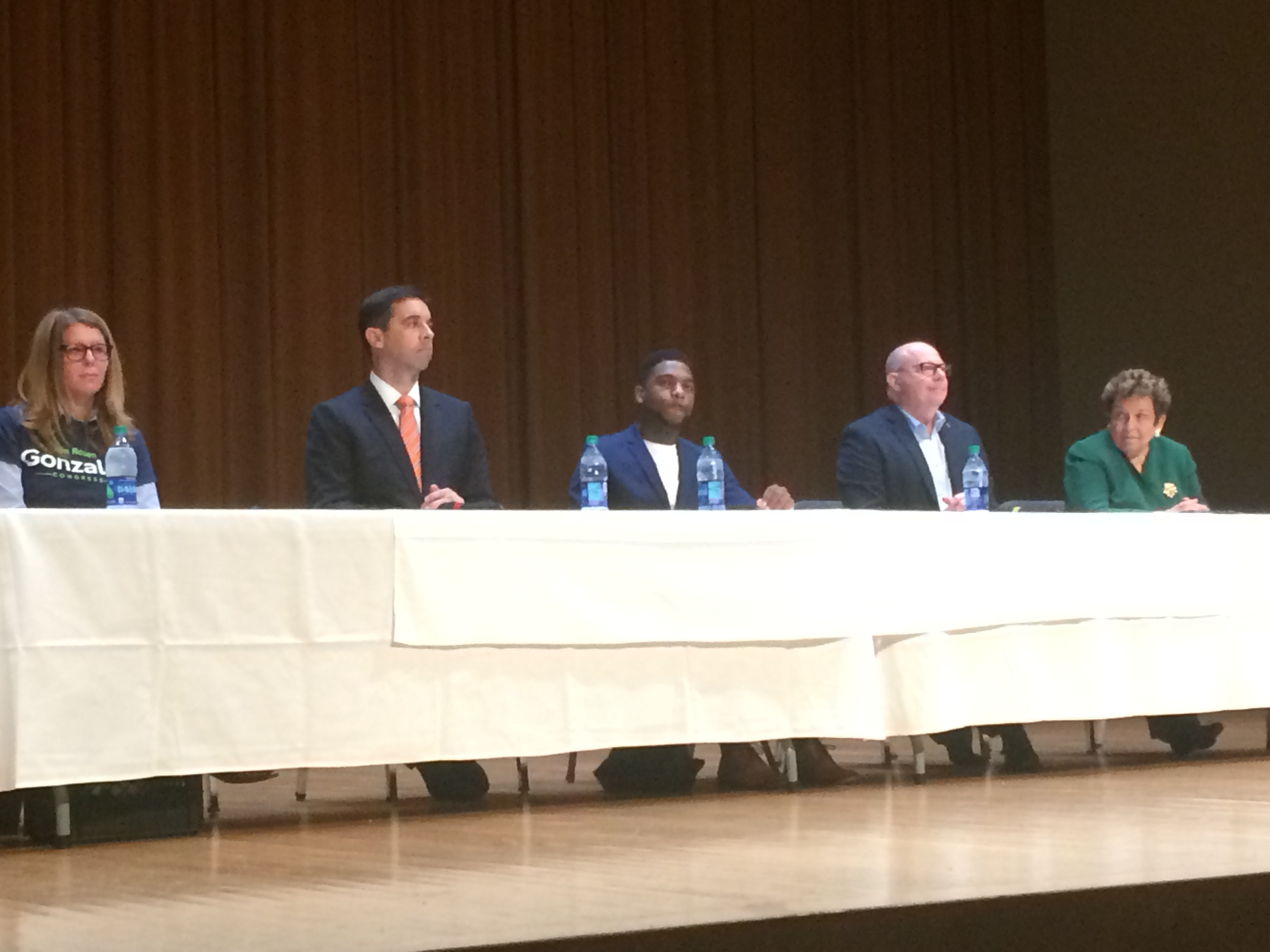 Democrats competing for Florida’s 27th Congressional District were together once again Thursday night, battling it out in the race’s third debate.

The candidates early on were asked about immigration, specifically their position on abolishing the Immigration and Customs Enforcement agency.

Richardson and Hepburn agreed on abolishing the organization. All three, however, made clear there should be some type of immigration enforcement arm inside the U.S.

Shalala did not join calls to scrap ICE entirely, instead arguing the agency should be reformed.

“I would change the leadership of ICE, the policies, redo the culture of the organization. There are 20,000 employees in ICE. I do not want to see them all lose their jobs.”

Rosen Gonzalez seconded Shalala, saying, “I would never put 20,000 people out of jobs. But I would retrain them, I would give them new policies.”

The candidates also discussed what should be done with undocumented immigrants already in the country. Rosen Gonzalez took the most leftward stance of the candidates onstage.

“We definitely need to grant amnesty to everyone who’s here so they start paying taxes,” she said. Rosen Gonzalez qualified that by saying those immigrants cannot have a criminal record and must “prove they’ve been contributing members to society.” However, she did not define how that would be done.

Richardson disagreed on granting full amnesty. “I would not use the word ‘amnesty’ because I think people want to feel like they earn their citizenship. And so I would give them a legal pathway. I would expect them to pay their taxes. I would expect there to be a waiting period.”

He also defended immigration as a whole, saying “We absolutely need immigration for our economy to work.” Richardson is referencing the fact that while native-born Americans have fewer children, immigrants typically have a higher birth rate, which helps to keep the workforce populated.

Richardson then turned his sights toward Shalala, referencing her time working in the Bill Clinton administration as Secretary of Health and Human Services.

“When she was running HHS, she was also part of the Office of Refugee Resettlement. And that’s when wet-foot, dry-foot started and she started sending Cuban-Americans back before they touched the soil.”

Putney, the moderator, pushed back on Richardson, seeking to fact-check him on the spot. “I had covered the immigration talks in Havana and Washington in 1994. Donna Shalala was not part of the talks.”

Things got combative when the topic turned to the environment, and the blue-green algae bloom spreading from Lake Okeechobee.

Rosen Gonzalez sought to call out Richardson over previous donations he received from the sugar industry.

“I would just like to point out that Mr. Richardson took $10,000 from Big Sugar, which is the agricultural industry that is causing the green algae bloom.”

The sugarcane industry has routinely pushed back against those claims, and Richardson seemed to second their assertions, slamming Rosen Gonzalez in the process.

“First of all, I’m sad that you don’t understand the issue because the blue-green algae is starting inside the lake on the north side of the lake.” Sugarcane farms are typically situated on Lake Okeechobee’s south side.

“If you would spend the time understanding the issue, you would fully understand and want a comprehensive plan,” he added.

There were also fireworks when Richardson took aim at Shalala for not filing a disclosure of her personal finances. He noted Shalala earned an extension that ends on July 27. However, he also noted candidates have a 30-day grace period from the deadline, meaning Shalala could file that report one day before the race’s Aug. 28 primary and not face any sort of sanction.

“I want us all tonight to challenge Donna Shalala to file her federally-required election finance report.”

Shalala at first implied she would meet that July 27 deadline. “I did not know about this little 30-day thing you could do after the federal deadline.”

Rechallenged by Richardson in a follow-up, Shalala said: “My returns will be filed by the 27th. I didn’t know about this little gimmick, and I’m not a gimmick person.”

On education, the candidates were asked whether they would support federalizing education. Hepburn and Richardson said yes, while Shalala, Rosen Gonzalez and Haggman answered with an “it’s complicated.”

Haggman summed up the concerns with such a plan, saying, “When you have a variety of things being tried at the local level, then it gives us the opportunity to experiment and find better ideas. And I wouldn’t want to rob us of that opportunity by having such a top-down federal approach.”

Hepburn and Richardson were not given a chance to elaborate on their plans to federalize education. It’s not clear whether they just wanted more federal involvement, which the other three agreed with, or whether the duo was proposing a fundamental overhaul of the country’s education system.

Hepburn did call for boosting teacher salaries. “No teacher in this country should be making less than $55,000 a year. Period. That should be funded by the federal government.”

Shalala referenced her experience working at multiple universities and what she says should be the aim of education policy.

The five are facing off to be the Democrats’ nominee in CD 27, expected to be a competitive race given the retirement of longtime Republican U.S. Rep. Ileana Ros-Lehtinen.

As voters continue to make their closing arguments to voters ahead of next month’s primary election, Haggman made a pitch to voters about what this election is about, while invoking the actions of the current president.