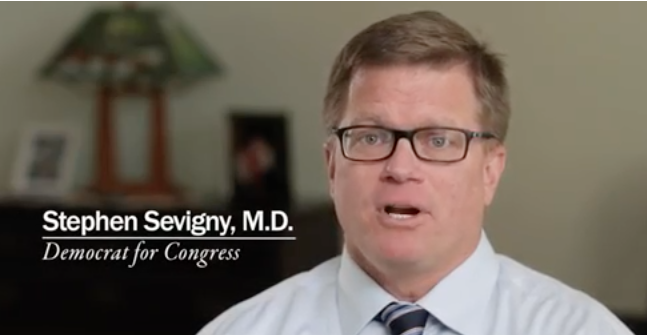 Democratic congressional candidate Stephen Sevigny has launched four television commercial on cable in Florida’s 6th Congressional District, offering his views on health care and his residence in the district, along with a cornucopia of Democratic concerns.

On Monday, Sevigny’s campaign began running the quartet of commercials in rotation through cable TV buys in the district, which stretches from just south of Jacksonville, running along Florida’s Historic Coast to Daytona Beach, and then inland through Volusia County and eastern Lake County just north of Orlando.

Details were not available Tuesday on the size of the buys. Because they were with cable providers rather than with broadcast TV stations, the contracts are not filed with the Federal Communications Commission.

One spot, “For here, From here,” is essentially an attack on Democratic front-runner Nancy Soderberg in the Aug. 28 primary. It charges that she, like the past couple of congressmen representing CD 6, does not actually live in the district.

Soderberg, whose home has been in Jacksonville, has taken an apartment in St. Augustine and declared it as her home. Sevigny, of Ormond Beach, and Soderberg also face John Upchurch in the Democratic primary. The Republican primary will pit former state Rep. Fred Costello, of Ormond Beach, Michael Waltz, and John Ward.

They all seek to succeed Republican U.S. Rep. Ron DeSantis, who is running for governor rather than for re-election.

“For years, our congressmen haven’t lived in our district. And this year three of the other candidates don’t either, including Nancy Soderberg. We need a representative who knows us, who isn’t just passing through,” Sevigny declares in the spot.

“I’m from here. And in Washington I’ll be for here,” he concludes.

Two of the commercials, “Healthcare Intro” and “Survivor” come from his background as a medical doctor and explore his concerns for improving health care and coverage.

Healthcare Intro also includes the tagline, “I’m from here. And in Washington, I’ll be for here.”

The fourth spot, “Our America,” may be the most powerful. It features a mashup of video clips of people of various ethnic backgrounds making declarations supporting Sevigny’s platform:

“In our America, health care is a right,” says the first man.

“In our America, babies aren’t put in cages,” says a woman.

“In our America, everyone has a chance to succeed,” says another man.

“In our America, we support public schools,” says the next woman.

“In our America, lobbyists don’t become members of Congress. Or vice versa,” says another woman.

“In our America, we stand up against the enemies of freedom, at home and abroad,” the first woman adds.

Sevigny then declares that for “the America we need and deserve, it takes new leadership.”