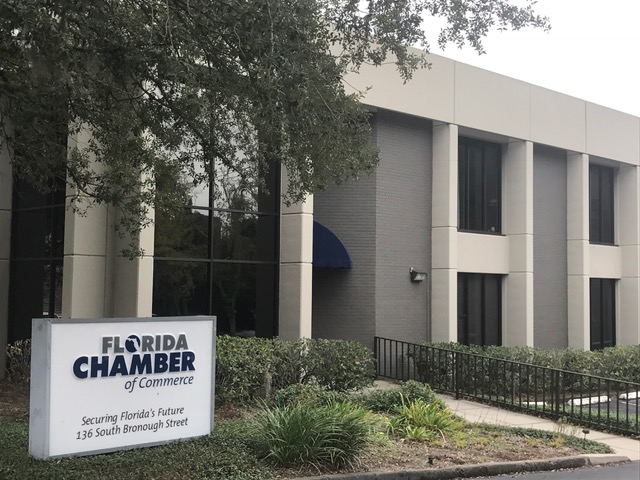 For a glimpse into the trends animating Tuesday’s primary elections, Florida Politics turned to the grande dame of the state’s political class — Marian Johnson, senior vice president for political operations for the Florida Chamber of Commerce.

Johnson has been politically engaged since Barry Goldwater’s 1964 run for President and now presides over one of the state’s most sophisticated political and demographic analytical operations.

We chatted Monday inside Johnson’s office at Chamber headquarters in Tallahassee. Chamber President and CEO Mark Wilson participated briefly in the interview. These remarks have been edited for length and clarity.

FP: What will you look for on primary Election Day?

MJ: My main concern for the Chamber is getting good legislators elected over there (the Capitol). Of course, we’re very interested in what happens (with) the Cabinet — it’s not that the legislative seats are more important. But no matter who is Governor, you’ve got to have good people over there who understand that certain things have to happen to secure Florida’s future.

There are some pretty significant primaries that will make a difference. Now when we get to the general election, the Senate’s going to be the play. You’ve got five or six competitive seats in the Senate.

FP: Which races are you looking at in the House?

MJ: I think Aaron Bean will be OK. He made some of the people angry over there, and that’s how he got his primary opposition. It was something about some land holdings, and Aaron went with the opposite side from the local people.

FP: Very parochial, but people care about that.

MJ: Yes. And Ed Hooper, of course — we are interested in what comes out of that race. It’s the old Jack Latvala seat in Pinellas County. Jason Pizzo might upset Daphne Campbell in SD 38 — he’s had enough money to do it.

MJ: It’s not just one thing. In every one of them, you can point to something that’s driving voters out, and why people are getting involved in it. It varies by area of the state.

Some of the people running believe they can actually do a better job. I don’t think I’ve met a candidate this year who’s had any kind of bad, ulterior motive. They want to serve. Some of them have no concept of what it’s going to be like when they get here, but they want to make Florida a better place.

FP: Any other noteworthy races?

MJ: You’ve got other races in Pinellas that are interesting. Jeff Brandes wound up without a primary opponent. But you’ve got some House races around Pinellas County that are really interesting. You’ve got Nick DeCeglie against Berny Jacques — that one could be closer than what people are anticipating.

One of the most fascinating is the Gayle Harrell seat in Martin County — Toby Overdorf versus Sasha Dadan. We did not endorse in that race. I understand that one had become a battleground, gotten pretty bad. Whoever wins that primary is going to win in November. I’m not sure it will change the direction of the state.

FP: What else is driving the elections?

But they cannot change immigration here — it’s got to be in D.C. — and some of them are not aware of that. We’ve had a lot of shootings in Florida.

MJ: A lot of the candidates want to be a part of solving this. They’re very, very motivated.

FP: Are you seeing evidence that the Parkland kids are having any influence?

MJ: In that local area, yeah. Because, really, most of the Democrats who want the extreme of ‘no guns’ are in the southern part of the state. Democrats in Middle and North Florida are very different. They want it solved, too, but in their parts of the state they like to go hunting and look at the issue differently.

FP: Any evidence that the progressive wing of the Democratic Party is mobilizing people?

MJ: I see that in Central Florida, especially around HD 47 and HD 30, along in there. There’s a young lady running on the Democratic side in that one (HB 47) who’s very progressive: Anna Eskamani … She cracks me up, makes me laugh, but we don’t see eye-to-eye on anything.

Some in South Florida. I don’t see it in the Tampa Bay area or on the west coast at all. Maybe around Broward, Miami-Dade.

FP: Obviously, the Democrats are going to need to turn out to prevail in November. Are you seeing any indication of whether that’s going to happen?

MJ: Not right now. They were looking for a big blue wave. A lot of it will change; a lot of it will depend on what happens tomorrow. But there’s just no indication of a gigantic blue wave. It might be a ripple effect, but I’m not seeing any major change.

Mark Wilson (dropping by Johnson’s office): … `Is there something going on or something?

MW: Except that the voters are changing as fast as the weather. It’s the first time I can ever remember — we just got the July numbers in — when no counties had Democrats as the No. 1 registration. Half of them were NPAs (no party affiliation) and the other half were Republican. Not one county!

MJ: I was just studying it, too. What is happening in Florida?

MW: I’m just talking about new voter registration — brand-new voters. Usually, you see some blues, you see some reds. We have a yellow color for NPAs.

MW: We believe that Republicans will be the third-largest party by 2023 or 2024. That’s the trajectory. It’ll be Democrats, then NPA, then Republicans. One of these years, somebody’s going to do a constitutional amendment for open primaries. I think it’ll pass with flying colors.

It won’t come from the Legislature, but Tom Steyer, George Soros, or somebody will do it. (Wilson leaves.)

MJ: I believe it is. Now, this is going to be an interesting election tomorrow and in the fall, because it’s the midterms. In midterm elections, Republicans supposed to lose all these seats. There’s supposed to be a blue wave coming. We don’t know.

We saw what happened to Jose “Pepi” Diaz in that special election (for SD 40). He was trying to get out of that primary and he tied himself to Trump. And then they took that same little rope and (she mimics a hanging) — skrrrk — in the general.

FP: What effect, if any, is President Trump having down-ballot — congressional and state Legislature?

MJ: If you’re in a Republican primary, you’re touting Trump.

FP: How popular is Trump in Florida?

MJ: Among Republicans, extremely popular. That little curve in Florida, where you’re coming down through Citrus County … not only Republicans but Democrats turned out for Trump. I call them my Yeti voters. That’s the people who go fishing, people who go hunting.

FP: As in Yeti coolers?

MJ: Yeah. Got the Yeti cooler with them, their Yeti hat, their Yeti on the back of their pickup trucks.

FP: And they’re turning out?

FP: What does the early vote say?

MJ: There are more Democrats who have voted now than there were at this point in 2014.

FP: But that doesn’t tell you what it used to tell you, does it?

MJ: It doesn’t, because you’ve got more voters now. You can go on our website … and it’ll give it to you by House district, by county, by Senate district, by congressional district — all of that.

MJ: It’s not. When a candidate’s running, they’ve got to be able to win two weeks out. In 2016, five days out, 60-something percent of the vote was already cast. Running a campaign is not like it used to be. Digital is everywhere. It’s more expensive. It’s scary that they can pinpoint where you are and send you a message because they know your demographics.

FP: Does it work?

MJ: We did a lot of digital in 2016 and, in a couple of races, I do believe that it made a difference. People haven’t given up on direct mail and TV yet. Most people, when you ask what’s the most trusted source for information, digital has shot up, but it’s still direct mail.

FP: Who’s good on social media? Are there candidates who are smart about it and actually producing results with it?

When he started running, every time I would turn my phone or iPad on, I’d get a Phil Levine commercial. I thought, “Why am I getting Phil Levine?” Because I’m not a registered Democrat.

He was being smart about it — he was trying to influence the political makers in the state, thinking that he was going to win the primary and that we would find him appealing for the general.

There are some in the House and the Senate. Adam Putnam has done some smart digital. I’ve seen some for Denise Grimsley. And it works. It really does work.

Whoever did the attack piece on Baxter Troutman (text messages highlighting his 2012 domestic violence arrest), that campaign was pretty successful. Baxter in the polls was ahead two weeks ago — decisively. Now he’s fighting even to make the nomination. Yup — they work.

FP: What other trends are you seeing?

MJ: If a candidate is not using door-to-door, it’s a mistake. Having a candidate walk the district. Just because digital is big, you’ve still got to have that personal touch. That makes the difference in a lot of these districts.

MJ: It’s those issues applied on a local level. Some places, immigration is the No. 1 issue. You can go 100 miles north and that won’t even show up.

FP: Is Trump not playing in those primaries?

MJ: If you’re in a Republican primary, you want to love Trump more than your opponent does. You’ll be surprised by the direct mail pieces that have gone out with Trump’s picture somewhere. It may not say anything about him. But Republicans love him, in all parts of the state. He was even improving in Miami-Dade.

FP: Are the Puerto Ricans who moved to Florida following Hurricane Maria players?

MJ: They could have been. And they still have time to register for the general. But those people who came over, they were too busy trying to see about their lives, and very few of them have registered.

They could have made a tremendous impact. Kelli Stargel’s seat was considered one that could change from R to D — that Poinciana area’s mostly where those Puerto Ricans are landing, and usually, they register Democrat. But they aren’t registering.

They’ve got until Oct. 4 or 5 to register. [The actual deadline is Oct. 9.] A lot of it’s going to depend on the winners tomorrow — whether anyone makes a drive for it.

previousNews you can use: 7 things to know about Primary Election Day