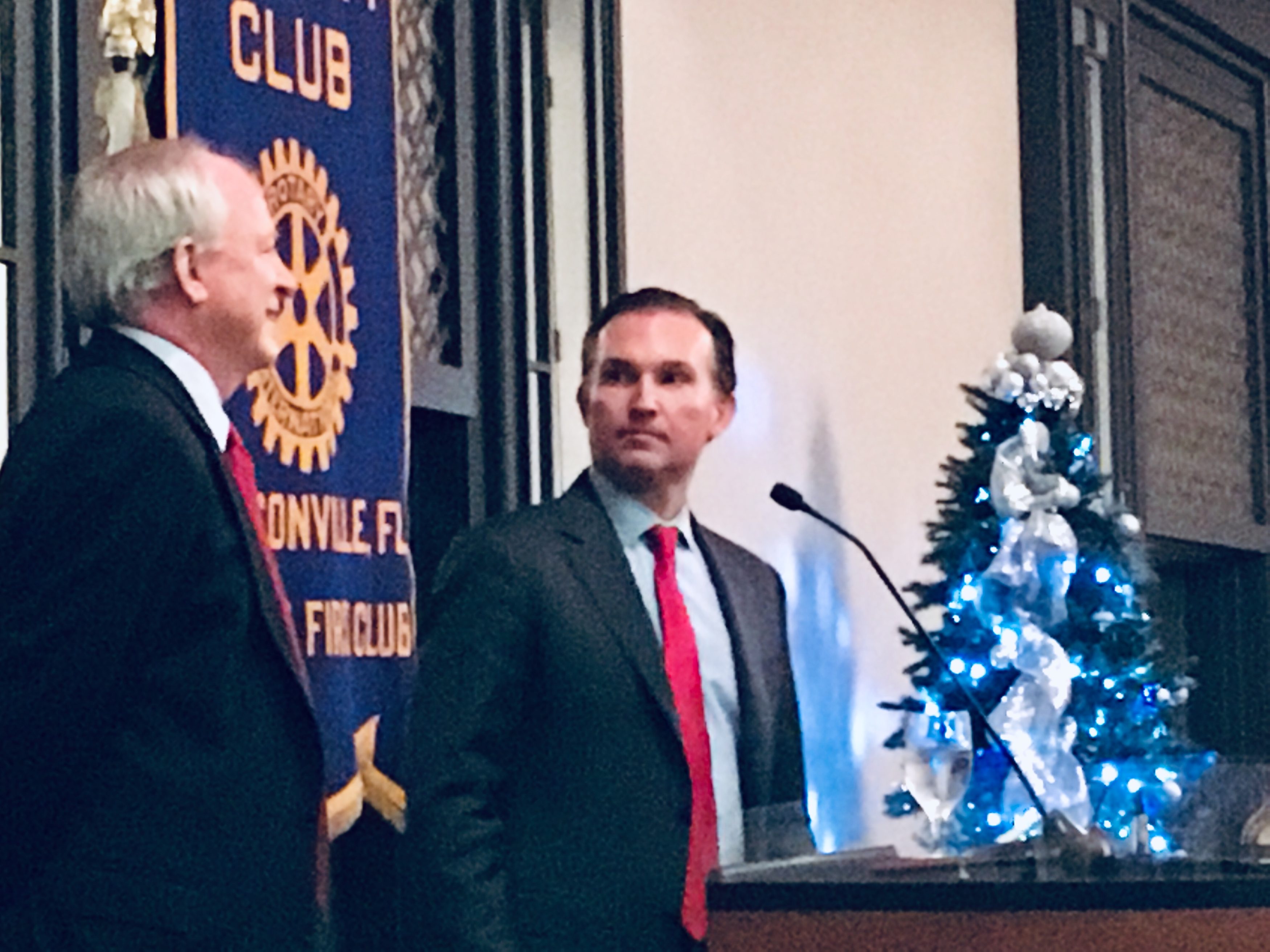 This was their second co-appearance in front of a Rotary group, and while the two first-term Republicans aren’t completing each other’s sentences, what was clear Monday was that they are determined to continue working together to push the city’s agenda forward.

Bowman addressed “the importance of having a strong partnership between the Mayor and Council staff.

“We don’t always agree,” Bowman said, “but you don’t hear about us disagreeing.”

While Bowman’s predecessor as president, Councilwoman Anna Brosche, was willing to talk to the press about issues with the Mayor’s Office, Bowman has chosen to work things out in a less headline-grabbing way.

The motivation obviously is pragmatic, especially at a time when there has been some unexpected turnover on Council even before the expected purge created by the 2019 elections.

“Six have been termed out, three haven’t refiled,” Bowman noted. And with three new members in the last year (two subs for indicted members, and a special election replacing someone who didn’t resign for legal reasons), Bowman pointed out the “very junior Council” right now.

Curry has inhabited the “strong mayor” role proscribed by Charter, and noted that all four budget have passed unanimously.

However, that was not without work.

For Curry, the work has been urgent.

“We’ve been in turnaround mode the last few years,” Curry said, discussing matters ranging from the paydown of debt and pension reform to the city’s first AAA rating on a bond issue.

“Budgets are sound; finances are real and ready to go,” Curry noted.

Curry lauded downtown development, noting a surge of momentum on issues ranging from VyStar moving downtown, Lot J, the District, and demolitions of the old courthouse and city hall.

“The best is yet to come,” Curry said.

As of now, there are tentative plans/hopes to move the jail from what is becoming increasingly valuable real estate near the stadium and Bay Street entertainment district.

The move “is a priority of mine, next term for sure,” Curry said.

Council President Bowman echoed this, saying the value of the land is “going way up,” and investors want to “get in on the action.”

The desire of investors to buy in includes the lots where the old courthouse and city hall sit, Curry added, with “a ton of external outside money lining up to talk” about the path forward.

Curry and Bowman align on the new direction of JEA, Jacksonville’s public utility, also. Both are ready for the privatization debate to be out of the headlines.

Curry noted that his administration had not lobbied board members to vote for “innovative … reformer” Aaron Zahn for CEO. He also denied the recurrent assertion, made by former Council President Anna Brosche, that legislation had been drafted to sell JEA as far back as February.

Bowman noted that “what happened with JEA and the City Council earlier this calendar year was really tumultuous.” However, that period is over.

The two line up on the Jacksonville Landing as well, presenting a united front in the continuing legal struggles with Landing operator Toney Sleiman.

Curry also sent a signal during his remarks to “school choice” proponents, noting that while he supports “competition,” an appointed school board isn’t happening anytime soon.

“An appointed school board would create accountability,” Curry said, “but it’s not happening.”

Curry is “excited” about working with Duval Schools Superintendent Diana Greene, he said.