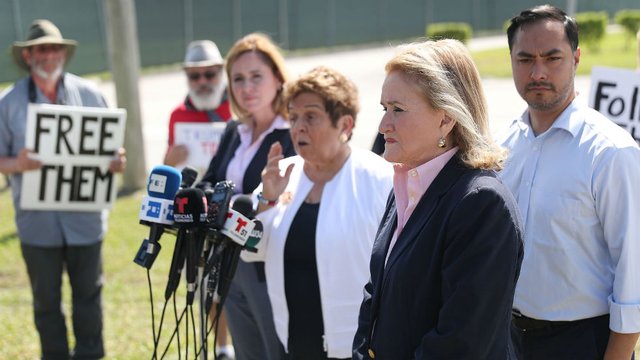 The representatives issued a joint statement slamming the decision.

“Denying entry to oversee the conditions and care provided to the unaccompanied children in the Homestead facility would not only be a breach of transparency and confidence in the care provided there, it would violate the law,” the statement reads.

After that happened, the statement notes, Congress took action.

“Congress specifically addressed it by ensuring Members would have unencumbered access to such facilities to conduct our constitutionally mandated oversight responsibilities,” the statement reads.

“Given long-held concerns about the Homestead facility’s lack of staffing, space, education and other services, the recent announcement by the Department of Health and Human Services that it will dramatically expand the number of beds there merits immediate scrutiny.”

President Donald Trump’s administration this week announced a major expansion in the Homestead facilities, from 2,350 to 3,200 later this month. That comes after a boost from 1,350 beds to 2,350 beds in January.

Notably, Shalala and Mucarsel-Powell toured the facility after the last expansion in beds.

The detention of refugees and treatment of immigrants and family separation by federal officials became a major campaign issue last year.

But this moves beyond political debate and into lawlessness, the congresswomen said.

“The Department’s initial refusal to allow entry there under these current circumstances is deeply troubling,” the statement reads. “Violating the law is never acceptable, and certainly not in this critical moment.”

Other Congressional leaders already warned that if officials denied visitation to members of Congress, there could be consequences.

“The representatives intend to visit the facility to conduct oversight of the condition of the facility and care received by the unaccompanied alien children,” DeLauro wrote.

She urged the department to ensure Homestead officials complied with statute.