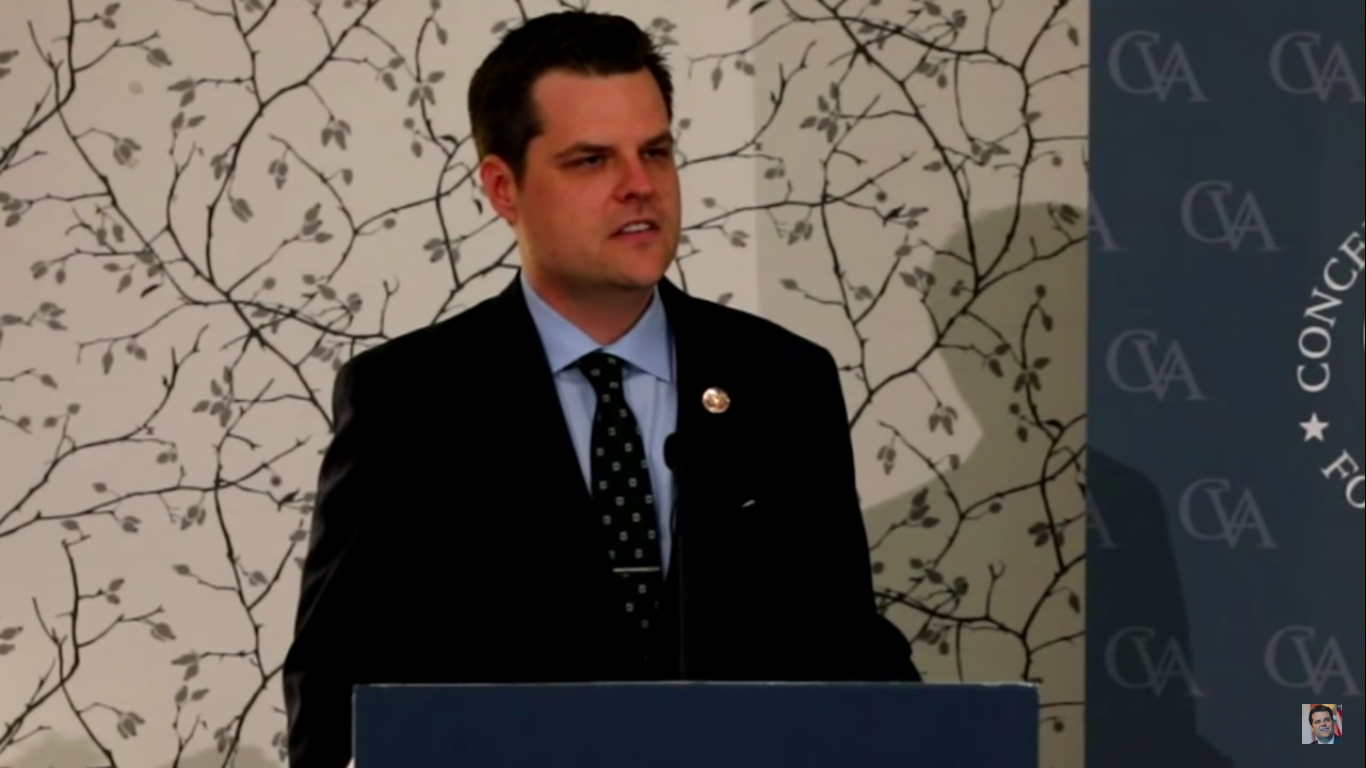 "President Trump is staying true to the instincts...."

What does America First mean when it comes to conservative foreign policy?

U.S. Rep. Matt Gaetz, a Panhandle Republican, took on the task of explaining it at the “Uniting for a Better Foreign Policy Luncheon” in Washington on Wednesday.

The event, hosted by Concerned Veterans for America and VoteVets, offered up the ally of President Donald Trump to explain the shift in foreign policy,

Gaetz praised Trump for building up the military but also for not spreading it so thin: “A well-funded force doesn’t necessarily need to be so well-worn,” he said.

“Today, our military is over-stretched, over-deployed and over-exerted. Growing up where I have, I’ve seen my whole life what endless deployments and unfocused wars really mean for our most patriotic fellow Americans.”

But hosting the highest concentration of active duty military personnel of any Congressional district in America also spotlights social consequences from war. He described the sentimental (“tearful airport goodbyes, bargaining with God for a safe return”) and the severely consequential (“domestic abuse, veteran suicide, shattered limbs”).

“We see the impact of war everyday among the people we love who shape our lives. It is a stark reminder that the unmatched freedoms we enjoy are not free — they are bought with the blood of American patriots.”

Gaetz called into question decisions of past administrations both Republican and Democrat.

“Since 2001, the United States government has spent nearly $6 trillion in Iraq and Afghanistan,” he said.

“The Iraq war alone is estimated to have cost $4 trillion — not to mention the immeasurable costs of lost and broken lives. To give you some perspective, $4 trillion was more than our country’s entire tax revenue last year. It would be enough to completely overhaul and modernize our nation’s infrastructure. It is more than the entire market capitalization of Microsoft, Google, Amazon, Facebook combines. It is more than the nation’s entire student loan and credit card debt combined.”

The rhetoric might have gotten a Congressman booed off a stage in a roomful of veterans in 2003 during the buildup to the Iraq War. Now, it comes from a Fox News fixture speaking on behalf of a Republican president.

The speech showcased the dramatic evolution of Republican Party policy from the foreign interventionism of George W. Bush to the hawkish isolationism of Donald Trump.

He slammed in particular the war in Afghanistan, which started a broadly supported war after 9/11 under President Bush and ultimately spanned the entire presidency of Democrat Barack Obama.

“We have been in Afghanistan for nearly two decades. It is the longest war in our nation’s history, longer than the Revolutionary War, Civil War and both World Wars combined,” Gaetz said.

“American soldiers are dying there who weren’t born when the war started. In Afghanistan, after two decades have passed, trillions spent, and thousands of American lives lost, the situation on the ground is actually getting worse.”

Pundits might have written Gaetz off as a beatnik in the past. The Fort Walton Beach Republican argued America can still hold a position of strength without perpetually sending boots on the ground.

“This might sound humanitarian in theory, but there is nothing humanitarian about the slave markets that now thrive in Libya, or the migrant crisis that has wreaked havoc across Europe,” Gaetz said.

While the Afghanistan conflict has certainly stretched into Trump’s presidency, Gaetz said the President deserves credit for avoiding new engagements.

“Luckily, the War Lobby never got its desired intervention in Syria, largely thanks to Donald Trump — the only major presidential candidate who spoke against the idea,” Gaetz said.

“The so-called ‘experts’ behind our failed foreign policy have not learned from their mistakes because they have never been held accountable for them. And so today the saber-rattling persists, and is directed toward Venezuela, Yemen, and, most disturbingly, Iran.”

Of course, Gaetz doesn’t necessarily speak for his entire party — or at times for Trump.

And Trump just this week seemed to rattle his own saber at Iran with a blood-chilling tweet.

“If Iran wants to fight, that will be the official end of Iran,” the President wrote. “Never threaten the United States again!”

He laid out pillars of such a policy — maintain a military edge, never let foreign interests call shots, link national and economic security, and always win when response becomes necessary.

“Freedom is the most precious thing in the world,” Gaetz said, “and it is for that very reason that freedom must be fought for and won by those who yearn to live it most. Freedom cannot be America’s gift to the world, purchased with the blood of U.S. service members alone.”

And he expressed confidence Trump would ultimately show a truly conservative approach to military intervention.

“If called to combat, my neighbors will go first, and will fight the hardest. But as policymakers, it is our task to fight harder in Washington to understand the deep consequences of US military force both at home and around the world,” Gaetz said.

“President Trump is staying true to the instincts he expressed while campaigning as an America First, anti-interventionist Republican.”