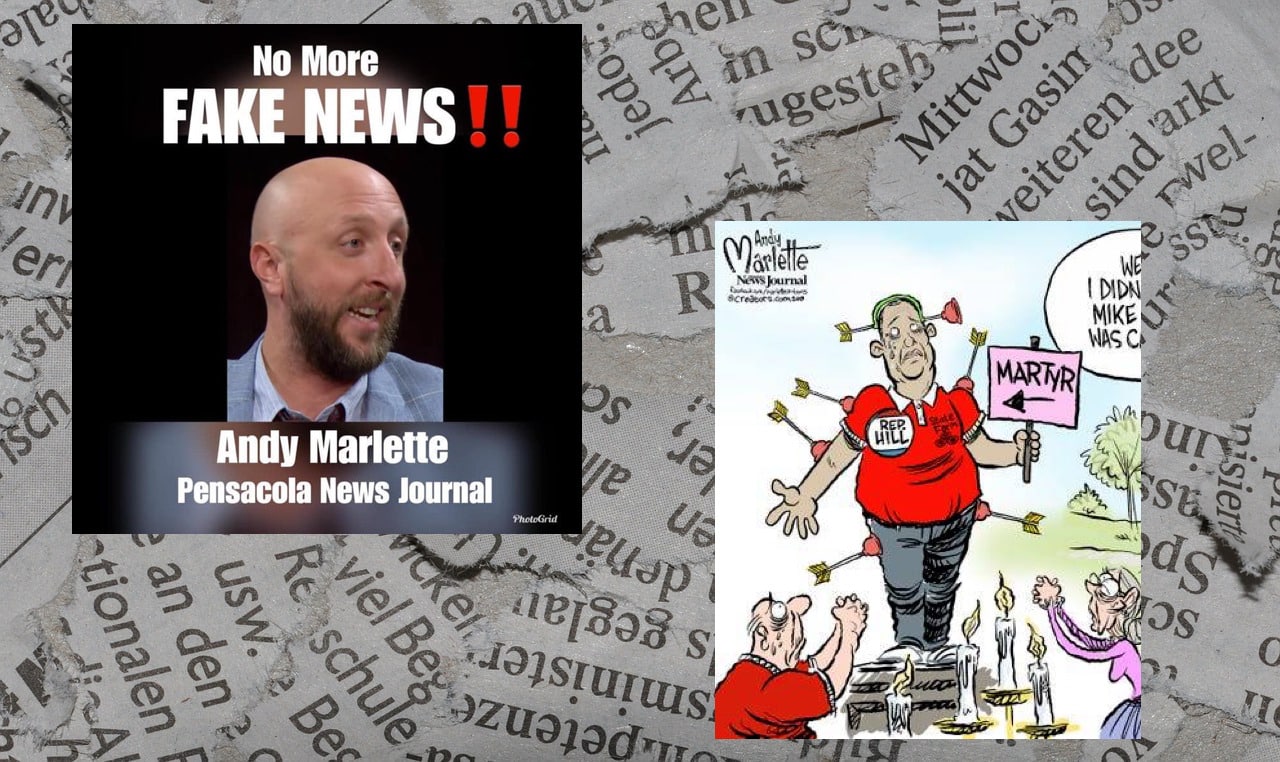 ... But he's all for sticking it to political cartoonists.

Now, backers for the lawmaker plan to protest outside his newspaper’s office.

“Haha, yes I saw that,” he wrote in an email to Florida Politics.

Perhaps it’s not a surprising response from Marlette, who also draws political cartoons for the newspaper. It’s his job to find humor in a scandal.

But he does think the upcoming rally, which Hill has promoted on social media, shows the Pensacola Republican has got a problem.

“It’s unfortunate any time the modus operandi of government authority figures like Rep. Hill is an instinctive reaction to snowflake sensitivity and narcissistic victimhood,” Marlette said. “I sincerely hope he receives the sort of psychological counseling that can begin the long, long healing process.”

Still, Marlette applauds people for getting out of their homes to combat his watchdog columns and whimsical drawings.

“I commend any citizens who show up to speak out against the dastardly art of political cartooning,” Marlette said. “It’s a filthy profession fit only for drunkards, raconteurs, voodoo practitioners and unshaven highwaymen who share more in common with lowly beasts like opossums, cockroaches and alligators than they do with civilized society.

The colorful commentary comes in response to a full-blown ballyhoo in Florida’s Panhandle. Leaked audio of Hill at a town hall already made headlines after the lawmaker pined for an Alabama-style abortion ban.

Hill said God told him to sponsor a similar law here, according to an article in the News Journal.

Then Marlette heard another bit of audio, one where a constituent incorrectly suggests 1 Corinthians in the Bible demands that “a man who has an affair with another man … be put to death.”

Hill’s response to the assertion? “It says that in the Old Testament, too.” When the town hall attendee said, “Can you introduce legislation?” Hill laughed. “I wonder how that would go over?” he said.

Marlette called Hill out in the News Journal’s pages.

“There, in that moment, Mike Hill and a few sad members of a small, cruel audience betrayed the most fundamental message of Christ — love,” Marlette wrote. “Talk about ‘old time religion.’”

Marlette since dubbed Hill as St. Snowflake. He’s caricatured Hill in cartoons showing the lawmaker adorned with rubber arrows and holding a “Martyr” sign pointed at himself.

But if Hill’s supporters worship at his feet and label the lawmaker a Christ figure, they paint Marlette as their Pontius Pilate.

An Eventbrite announcement for a rally outside the News-Journal office prominently features a picture of Marlette under the headline “No More Fake News!!”

The announcement promises a rally will take place from 4 to 5 p.m. Saturday.

nextLt. Governor steps up action on hepatitis A outbreak