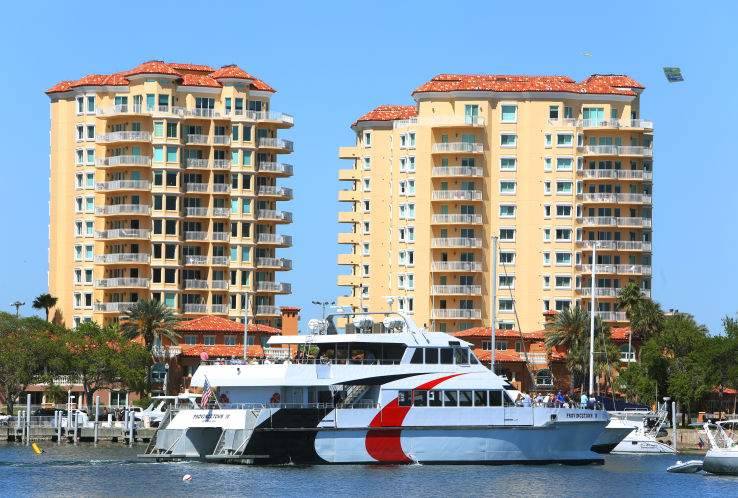 The third season of the Cross Bay Ferry is official a-go now that all four participating Tampa Bay governments have signed off on an interlocal agreement funding the six-month service for $150,000 each.

Tampa City Council was the last government to approve the agreement Thursday.

Since all boxes are checked, the city of St. Pete is working with the ferry operator, HMS Ferries, to secure a boat for the season, which will launch November 1 and run through April.

St. Pete is also beginning work to re-up its temporary dock in the Vinoy basin as work continues on the new pier. On the Tampa side, the dock will move back to the Tampa Convention Center after docking last season near the Florida Aquarium.

The ferry was forced to find another docking location during that season because of construction at the Convention Center that is now complete. That location is better for service because the ferry will not have to compete with cruise ships coming in and out and can offer more frequent service on Sundays, which should boost ridership.

“I’m not expecting any fare changes,” St. Pete Mayor Rick Kriseman said of this year’s service. “We are always looking at the schedule and tweak it if need be.”

One change Kriseman does is expect is additional service on Sunday.

“The more people become aware of the ferry, the more ridership will increase,” Kriseman said. “We are going to continue to try and market and get the word out, and this year we’re going to encourage hotels in the area to let people know so they’re guests might use the service to visit both sides of the Bay.”

During the Cross Bay Ferry’s inaugural season two years ago, the four partnering governments each received about $44,000 in revenue sharing refunds after the service concluded. None of the governments received revenue sharing after last season, and Kriseman doesn’t expect that to happen this year either.

The cities and governments helping to fund the service are entitled to equal portions of any revenue exceeding $400,000. That threshold was lower during the pilot season, but each government contributed $300,000 for that service.

Since then, HMS Ferries has assumed more risk for the service, meaning the city and government investment was cut in half. Kriseman said that decrease saves the city more money than it would gain if they received revenue sharing under the previous model that came with a higher initial investment.

Kriseman has made the ferry something of a legacy in his administration. He said it was important to him because of the need to encourage alternative modes of transportation as a part of trying to reduce traffic congestion as well as reducing carbon emissions.

“What we saw was 40 percent of the people who rode the ferry this season said they were going to make the trip anyway, but instead of driving a car they took the ferry,” Kriseman said.

That, of course, reduces carbon pollution by removing cars from the road, a top priority for Kriseman’s administration in its pursuit to become 100 percent reliant on clean energy.

The interlocal agreement approved and signed by the four partnering governments covers two seasons of ferry service, Kriseman said. That means next year the governments only need to include funding in their budgets.