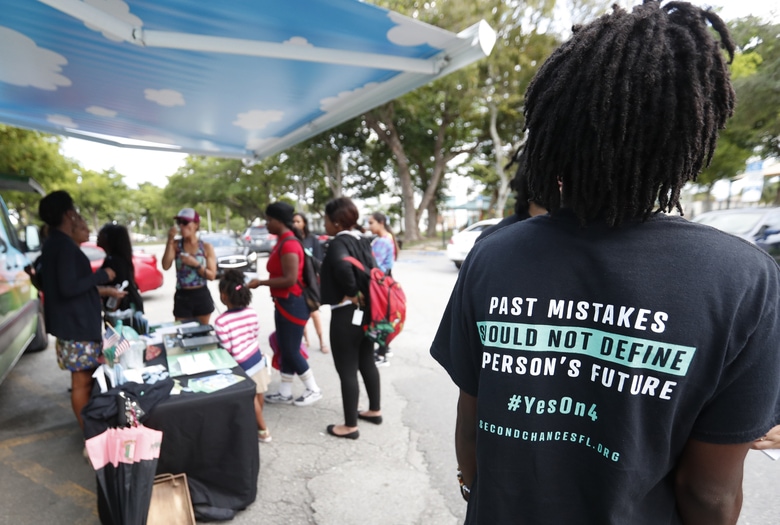 A federal judge issued a ruling Friday temporarily blocking a Republican-backed Florida law that barred some felons from voting because of their inability to pay fines and other legal debts.

The ruling by U.S. District Judge Robert Hinkle means thousands of felons who were denied the right to vote will be able to cast ballots unless the state gets a higher court to intervene or if Hinkle later upholds the constitutionality of the state law.

At issue is whether Florida lawmakers can require released felons to first pay all outstanding fines, restitution and other legal debts before they can regain the right to vote under last year’s voter-approved Amendment 4.

Hinkle was particularly sympathetic to arguments made by lawyers representing disenfranchised felons who asserted that the financial requirement was akin to a poll tax.

With Florida’s history of close races, the case is not an inconsequential one. Democrats and Republicans alike have sought to develop an advantage at the ballot box. With next year’s high stakes presidential election looming, Florida will likely again be an intensely fought battleground.

Studies have shown disenfranchisement tends to take more votes from Democratic candidates, but it is unclear which party re-enfranchised felons are more likely to support in Florida.

While Hinkle appeared to recognize the state’s authority to stipulate that fines and other debts must be paid before a criminal sentence can be considered completed, he said: “The last word will belong to the Florida Supreme Court.”

The state’s high court could very well entertain that question when it considers the law as part of a request by Gov. Ron DeSantis for an advisory opinion.

Hinkle said that was not an issue that he was ready to answer as part of his ruling for a temporary injunction against the state.

Both sides are expected to begin pleading their full case before Hinkle in April. Even then, the case could be far from final because of appeals.

In his opinion, Hinkle said a felon’s inability to pay raises constitutional questions, noting that about 80% of the state’s felons have unpaid financial obligations imposed by courts during sentencing.

As many as 1.4 million felons who have completed their sentences regained voting privileges under a constitutional amendment overwhelmingly passed by voters last fall. But the Republican-controlled Legislature earlier this year passed a bill — later signed by DeSantis — stipulating that felons must pay all fines, restitution and other financial obligations to complete their sentences.

“Today’s ruling affirms the governor’s consistent position that convicted felons should be held responsible for paying applicable restitution, fees, and fines while also recognizing the need to provide an avenue for individuals unable to pay back their debts as a result of true financial hardship,” Helen Aguirre Ferre, the governor’s spokeswoman, said in an email.

She said the governor would consider options “on addressing a pathway for those who are indigent and unable to address their outstanding financial obligations.”

“I wholeheartedly support the federal judge’s decision to place a temporary injunction on efforts to block the full implementation of Amendment 4,” said state Rep. Anna Eskamani. “Floridians overwhelmingly supported Amendment 4 on the 2018 ballot — this state believes in second chances, and we should make voting easier and more accessible, not legislate politically motivated restrictions that go against what Florida voters want.”

Florida Democratic Party Chair Terrie Rizzo added, “This is a victory for all voters — who overwhelmingly voted to give returning citizens their rights back. SB7066 is a poll tax and a blatant attempt by Republicans to suppress the vote. What is clear — this law is unconstitutional and the Florida Legislature has the responsibility to fix it immediately.”

Senate Democratic Leader Audrey Gibson said, “SB7066 was never intended to follow the people’s mandate under Amendment 4. It was an unnecessary bill designed for the sole purpose of permanently disenfranchising as many ex-felons as possible. While the injunction may be limited, the writing is clearly on the wall: the Legislature passed an unconstitutional bill and now has the obligation to fix it.”

“Fiercely opposed by Democrats in the Legislature, SB7066 undermined the very basic language contained in Amendment 4, which provided that ex-felons would automatically regain the right to vote once they were released from state custody. Only those convicted of certain sex crimes and murder are excluded in the amendment.

“The Republican majority rejected the mandate, voting instead to impose additional conditions such as full repayment of any outstanding fines, fees, and restitution before voting eligibility would be granted, regardless if a former felon was already making payment, or had no immediate means to fully satisfy often exorbitant monetary sanctions.

“Floridians who supported Amendment 4 never intended to resurrect a poll tax. Their intent was to approve a second chance for returning citizens to participate in the democratic process,” said Leader Gibson, whose Caucus unanimously voted against SB7066. “Judge Hinkle recognized, in his ruling, that under the constitution, ability to pay cannot prohibit the ability to vote. It’s time the Florida Legislature recognize that basic right as well.”

The American Civil Liberties Union, ACLU of Florida, NAACP Legal Defense and Educational Fund, and Brennan Center for Justice at NYU School of Law were in court earlier this month seeking the preliminary injunction, which was granted in part Friday by Hinkle.

“The court held that the right to vote cannot be denied based on a person’s inability to pay fines and fees. This ruling recognizes the gravity of elected offi0cials trying to circumvent Amendment 4 to create voting roadblocks based on wealth,” said Julie Ebenstein, an attorney with the ACLU’s Voting Rights Project.

“The Court made crystal clear today that a returning citizen’s vote cannot be conditioned on their wealth. Rosemary McCoy and everyone involved in the case is fighting for their right to vote and believed they earned that right back after Floridian’s overwhelmingly approved Amendment 4 last November.

“While the decision only applies to the plaintiffs, the writing is on the wall for the Florida Legislature to correct the administrative chaos it created in passing SB 7066. This was an important first step in the case, and we look forward to ultimately proving in court that SB 7066 is a modern-day poll tax.”

Secretary of State Laurel Lee said her department was reviewing the order but would comply with the ruling and provide guidance to local elections officials.

nextJoe Henderson: Only one "fix" is needed on Amendment 4