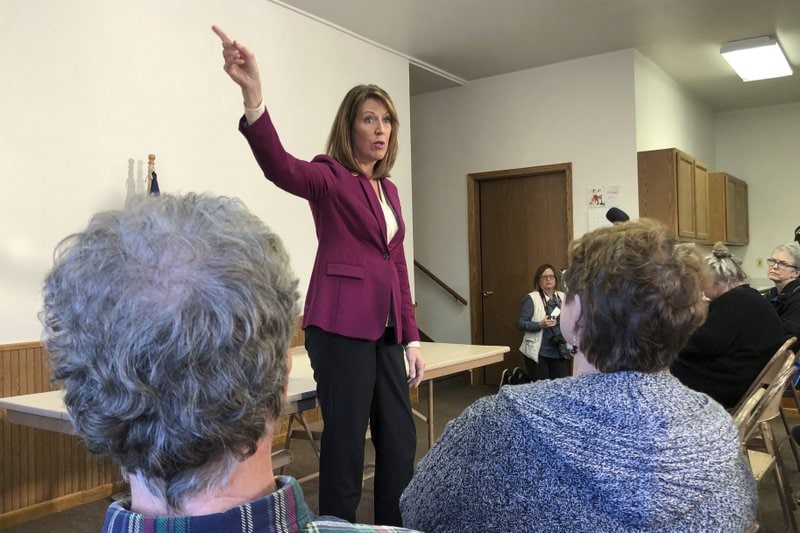 Over the next year, Democrats will try to navigate the unpredictable political fallout from impeachment.

Rep. Cindy Axne happily talked about trade, health care and agriculture with about three dozen constituents who gathered in a farm bureau office the weekend before Christmas. Missing from the Iowa Democrat’s talking points: Her recent vote to impeach President Donald Trump.

Over the course of an hour, the issue that most clearly represents Washington’s Trump-era polarization came up just once. And even then, it was from a questioner who thanked Axne for supporting the two articles that cleared the House last week in a party-line vote.

Axne seemed a little surprised by the muted reaction.

“I thought we’d have more,” she told The Associated Press. “I get plenty of feedback, and we get plenty of calls into our office from folks who are on both sides.”

It was a stark difference from one of the last times Axne was back in her congressional district, which stretches from the state capital of Des Moines across rural, southwestern Iowa. During that trip over the Thanksgiving break, the crowd was testy about the prospect of impeachment and one constituent implored her to “get stuff done.”

Axne’s effort to stay laser-focused on policy may be the playbook vulnerable Democrats across the country deploy over the next year as they try to navigate the unpredictable political fallout from impeachment. Trump and his Republican allies insist voters will punish Democrats who backed impeachment. But the notable lack of protest at Axne’s event could give Democrats hope they can survive one of the most controversial votes they’ve had to take in recent memory.

“Iowans care about the issues,” Axne said. “They might not agree with my vote on impeachment, but they have bigger things to worry about.”

Iowa’s 3rd District went for President Barack Obama in 2012 by about 4 percentage points before Trump won it in 2016 by the same margin. It’s one of more than two dozen districts that Trump carried in 2016 that are now represented by a Democrat.

Axne won the seat last year by about 2 percentage points — with less than 50% of the vote. Her district spreads across 16 counties and she prevailed by carrying just one of them: Polk, home to liberal voters in Des Moines, which is Iowa’s largest city.

That makes Axne an enticing target for Republicans looking for any path to regain the House majority next year.

She’s facing a potential rematch against David Young, the GOP incumbent she deposed. Republicans have been running impeachment-focused television ads against her since early October, and Vice President Mike Pence appeared on a Des Moines television station last week to urge Axne to split with her party on the issue.

Young said the impeachment vote will be a potent one because it proves that “she’s not who she said she’d be when she ran.”

“She ran as a pragmatic, middle-of-the-road problem solver,” and now votes with Democrats a majority of the time, he argued.

Iowans, he said, see impeachment as “a waste of money, a waste of time, a waste of an opportunity to take on those issues that really affect their lives.”

Axne acknowledged the barrage of attacks Republicans have already launched against her focused on impeachment. Republican groups have spent nearly $300,000 on television ads attacking her on the issue in her district.

“I’m going to be up against that for the next year. Do I think it will cost me my seat? That has yet to be seen,” she said.

Glenn Hurst, the Democratic chair in Iowa’s 3rd District, said he and other Iowa Democrats are concerned that impeachment could hurt them up and down the ballot.

“It’d be foolish not to have some concern, knowing that there are people who are really on both ends of the spectrum, as well as people in the middle, who aren’t able to weed out the rightness of the action Trump took,” he said.

Still, Hurst expressed optimism that Democrats have explained their case well enough, pointing to the response at the Saturday town hall as evidence.

“I think if we were gonna see backlash, we’d be seeing it now. It was almost a shrug of the shoulders here,” he said.

Bryan Mowrer, the 64-year-old farmer who opened up the farm bureau’s office for the town hall, said the tepid response was partly a result of timing. It was an unseasonably warm weekend afternoon just days before Christmas and farmers were about two months behind on their planting for the upcoming spring.

He said his phone had been “buzzing nonstop” with questions for Axne from farmers who couldn’t attend. But most were focused on the recent trade deal Trump struck with Democrats. Mowrer himself asked Axne why the USMCA took so long to pass.

Mowrer voted for Young in 2018, and considers himself a libertarian. He’s undecided on who he’ll support in 2020 — Axne “seems OK,” he said, but “we’ll see how bad the other side is.”

While the crowd at Axne’s town hall was mostly favorable, down the street at the only restaurant open in town on Saturday evening, the dinner crowd seemed more characteristic of the county overall.

“As a taxpayer, (impeachment is) a waste of time and money. The Democrats have not done anything in the last three years, and they could’ve done this USMCA a year ago but they didn’t. They drug it out,” said 68-year-old Clete Steensen, who came to enjoy dinner with his wife.

Steensen, a farmer himself, had been working all day “or I would’ve come in and given her a piece of my mind,” he said of Axne’s town hall.

There was also some evidence that impeachment could backfire on Democrats, as Republicans have argued, and fire up the GOP base.

“I think it’s ridiculous what the Democrats are doing,” she said. “They’re just for themselves. They’re not worried about people.”

Stracke didn’t vote in 2016, but she’s thinking seriously about it in 2020. She’s been happy with Trump’s presidency, and after watching the impeachment hearings, she thinks he deserves defending.

“It just made me feel stronger about Donald Trump,” she said.

previousJohn Roberts will tap his inner umpire in impeachment trial