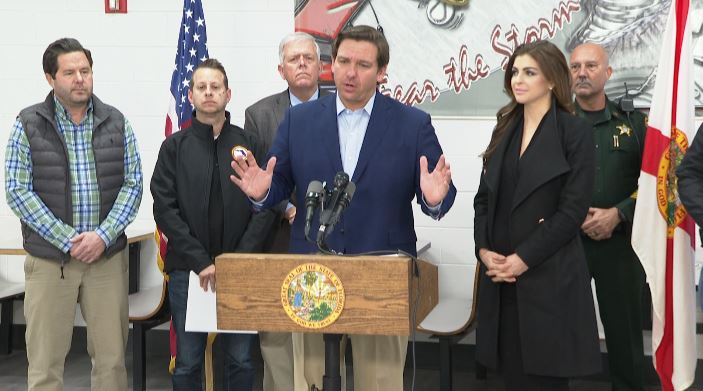 Gov. Ron DeSantis said he didn’t write the tweet about ex-felons that appeared under his name, the one declaring voting to be a “privilege.” I’ll take him at his word. I also suspect some serious stuff is about to roll downhill onto the head of a junior staffer, if it hasn’t already.

Either way, though, in political terms the chattering over the tweet/no-tweet and voting rights probably is just a flea on an elephant’s backside. The issue remains undecided, awaiting court rulings that will drag out who knows how long.

DeSantis clearly doesn’t like Amendment 4, which was overwhelmingly approved in 2018 by Florida voters. They believed passage of the amendment would restore voting rights for felons who had completed their sentences. No doubt, most voters believed that meant when that person was released from jail.

Well, we’ve been over this before. Republican lawmakers saw the possibility of a million new voters on the rolls who were likely to vote Democrat. Yikes!

They said nope, wait a minute, the sentence includes all fines, court costs, and anything else we can dig up to delay this. Now, it’s up to the courts to determine if Republicans are correct, based on the language of the bill. Opponents fiercely argue for the will of the voters. And for what it’s worth, this isn’t strictly a bleeding-heart response to hardened criminals.

While we’re waiting for that white puff of judicial smoke though, the follow up to the tweet/no-tweet led to a little eyebrow-raiser. It was what DeSantis said while explaining the miscommunication that got my attention.

However, it does enfranchise everyone who believes a felon’s debt is never paid.

Not everyone serving time for a felony committed violence. I mean, look at all those close to President Donald Trump who have already been convicted or pleaded guilty. Some have already served their times, while others wait to learn how long they’ll be a guest of the federal prison system.

The higher the total (the magic number if 44), the stiffer the penalty.

No one is talking about “enfranchising” violent felons. Besides, the amendment specifically excludes felons guilty of crimes such as rape or murder from voting.

So, it seems to me that the Governor was playing to the crowd on this one — the crowd being the almighty GOP base.

It’s an election year and lots of Republicans are running for office, including Trump. You may have heard about that. DeSantis isn’t on the ballot, but it’s never too soon to reinforce your law-and-order chops, along with the idea the GOP is TOUGH ON CRIME, DAMMIT.

Amendment 4 was about giving a break to people trying to get their lives in order. Rather than using scary language to fight them, the Governor could show some compassion and work toward making it happen.

Who knows, some of them might even vote Republican.

That’s a tweet Gov. DeSantis would love to make.