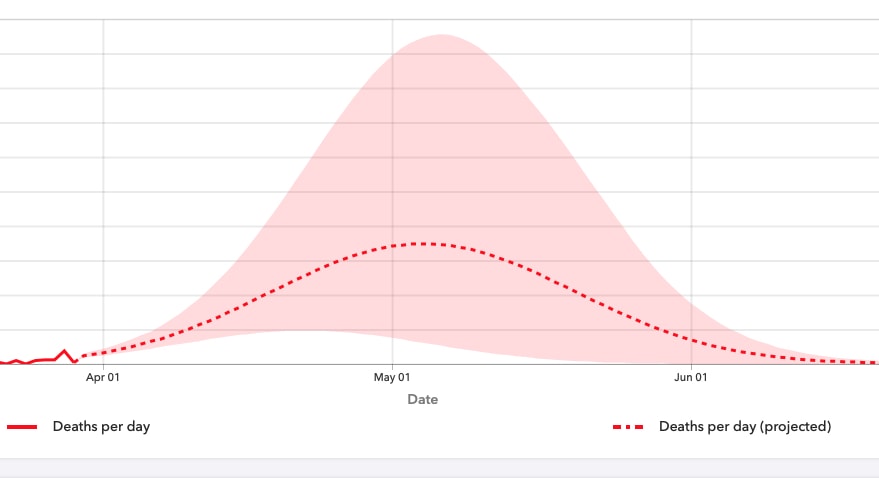 Florida could fill more than 10,000 hospital beds with COVID-19 patients by April 17.

An institute’s new research suggests Florida’s COVID-19 outbreak is likely to reach its worst point much later than most of the rest of the country — not until May 3 — and is likely to be deadly for a long time.

That could lead Florida to suffer the nation’s second-highest death toll behind only New York, according to a coronavirus projection model developed at a University of Washington-based research institute.

By May 3, perhaps 174 Floridians could be dying every day from COVID-19, according to the modeling done by the The Institute for Health Metrics and Evaluation, an independent population health research center at the University of Washington.

On the other hand, Florida’s slower buildup of cases could prevent the Sunshine State’s health care system from being totally overwhelmed, as is expected in outbreaks in many other states, notably New York. The modeling done by the Washington researchers predicts that Florida probably would not run out of hospital beds, though the state’s hospital system would run out of intensive care unit beds when the worst of the coronavirus crisis is felt here.

By July 1, the crisis of the “first wave” of coronavirus epidemic is likely to have subsided. The institute does not project beyond that, but notes that a second wave crisis is possible.

On that national peak day, according to the institute’s modeling, 2,271 Americans could be dying every day from the virus.

When the first wave of the epidemic has subsided, 82,141 Americans could have died from it, the institute projects.

That projected death toll actually is lower than projections now being discussed by President Donald Trump and his administration. On Sunday Trump and Dr. Anthony Fauci, director of the National Institute of Allergy and Infectious Diseases, said they were hoping for an epidemic that would leave no more than “100,000 to 200,000” Americans dead, and perhaps fewer.

The IHME contends its model “is informed by the shape that other COVID-19 outbreaks are taking, in terms of deaths, around the world and across the US.” The projections also are based on the assumption that all states will implement full, state-wide, stay-at-home strategies. Florida is among those that have not yet done so.

The institute says it developed the model and projections to help hospitals and public health officials plan for and implement strategies to prepare for the peak demands for hospitals and health care systems.

“These are urgently needed given that peak volumes are estimated to be only three weeks away,” IHME Director Dr. Christopher J.L. Murray states in a description of the project. “The estimated excess demand on hospital systems is predicated on the enactment of social distancing measures in all states that have not done so already within the next week and maintenance of these measures throughout the epidemic, emphasizing the importance of implementing, enforcing, and maintaining these measures to mitigate hospital system overload and prevent deaths.”

While plotting a most-likely line of projections for Florida, the United States, and all other states, the models also shade in the ranges that can be projected.

Those ranges remain pretty broad ranges, at least in distant weeks, lending both hope that things might not be as bad as the main-line projections, but also concern that they could be much worse.

The IHME model also projects an unusually long duration, compared with most other states, for Florida’s coronavirus crisis, with hospitalizations and deaths remaining at high rates for more than a month, starting in mid-April.

At least 100 COVID-19 patients could die in Florida every day starting around April 18, and Florida’s toll might not drop below 100 deaths a day until May 21, according to the institute’s model. To date, only 63 people have died from COVID-19 in Florida.

While Florida’s projected death toll could be devastating, the good news in the institute’s model is the notion that Florida’s hospital system might not be overwhelmed, as other states face. While Florida could run out of ICU beds, as could almost all states in the projections, Florida’s hospital system appears to have enough capacity to at least take in all the COVID-19 patients who will need hospitalization.

The institute’s projections show that New York, where temporary hospitals already are under construction in parks, convention centers and elsewhere, could come up short of needs by 58,000 hospital beds and by more than 10,000 ICU beds by its worst point.

New York is not alone facing that difficult prospect. States as diverse as Maine, Massachusetts, Michigan, Mississippi, and Colorado also are projected to be thousands of hospital beds and hundreds if not thousands of ICU beds short of meeting their projected COVID-19 patients’ needs.

Here are the estimated COVID-19 pandemic peak dates and death tolls that the institute is projecting for a handful of other states:

previousLast Call for 3.30.20 — A prime-time read of what's going down in Florida politics