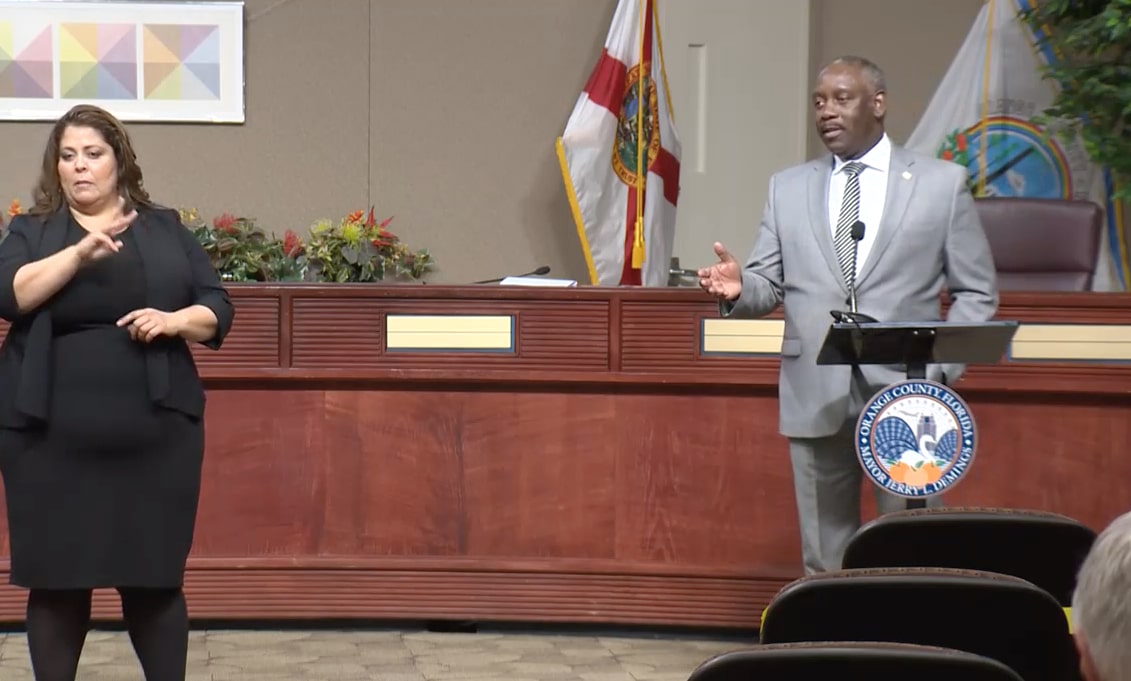 Orange County Mayor Jerry Demings and Orlando Mayor Buddy Dyer both said Monday they are hopeful the area’s coronavirus outbreak is flattening out and may soon peak.

“We are seeing a flattening of the curve,” Dyer said Monday afternoon, after Orange County saw several consecutive days of limited growth in the numbers of confirmed new COVID-19 cases.

But both of them and Dr. Raul Pino, health officer for the Florida Department of Health in Orange County, also stressed that they do not think now or anytime soon is the time for people to start relaxing social distancing or the shut-down and curfew orders in place for Orange County.

“Both mayors have talked about the flattening of the curve. We are looking at several data sources to come to that type of assessment,” Pino said. “I think there is a deceleration in Orange County. But it doesn’t mean its permanent. It doesn’t mean that we are out of the woods yet. That is not the case. We need more data to be able to assess if we have peaked already.

“At some places, they peak twice,” he added. “And in some places it is related to the fact that people relax a little bit.”

Demings said hospital officials in Central Florida have offered various data modeling projections that suggest a peak of infections this week, or next week, or as late as early May,

“There are some that suggest we have already peaked. We still want to plan that there may be a resurgence in late summer. We don’t want that to happen either,” Deming said. “We know that, you all are like me, when I say to my family: ‘Let’s just get this done. I don’t want to have to go through this again in two months.’

“That means we have to run through the finish line,” he said.

Their comments came on the same day Orange County’s COVID-19 caseload topped 1,000, making it the fourth county in Florida to exceed four-digits.

Yet while the county saw 75 new cases reported between Sunday morning and Monday morning, bringing the caseload to 1,017, the county’s caseload has increased only about 37% in a week. That actually is a much slower pace than the county had seen the previous two weeks, when its caseload was doubling every few days.

Demings instituted a curfew on March 20 and a county-wide stay-at-home order on March 26.

With that type of caseload, and a total of hospitalized patients still increasing, Orange County officials still are seeking a dramatic increase in testing. Pino said he expects to be able to soon open five new drive-up testing centers in Orange County, including one in downtown, but still needs to secure more test kits to be able to do so.

Demings said he and other officials including Orange County Sheriff John Mina have decided to not require people to wear masks when they go out. Demings cited both the enforcement issues Mina and law enforcement officers might have to struggle with, and the fact that there continues to be a shortage of available masks.

Demings also said he and Dyer are bringing together an advisory panel of business leaders, both from small businesses and large corporations, to start putting together a plan to reopen the economy. But he bristled when asked if he agreed with President Donald Trump‘s stated desires to restart the economy in May, saying he would prefer to rely on scientific assessments from doctors.

previousMore than 100 now dead in Miami-Dade, the state's coronavirus epicenter