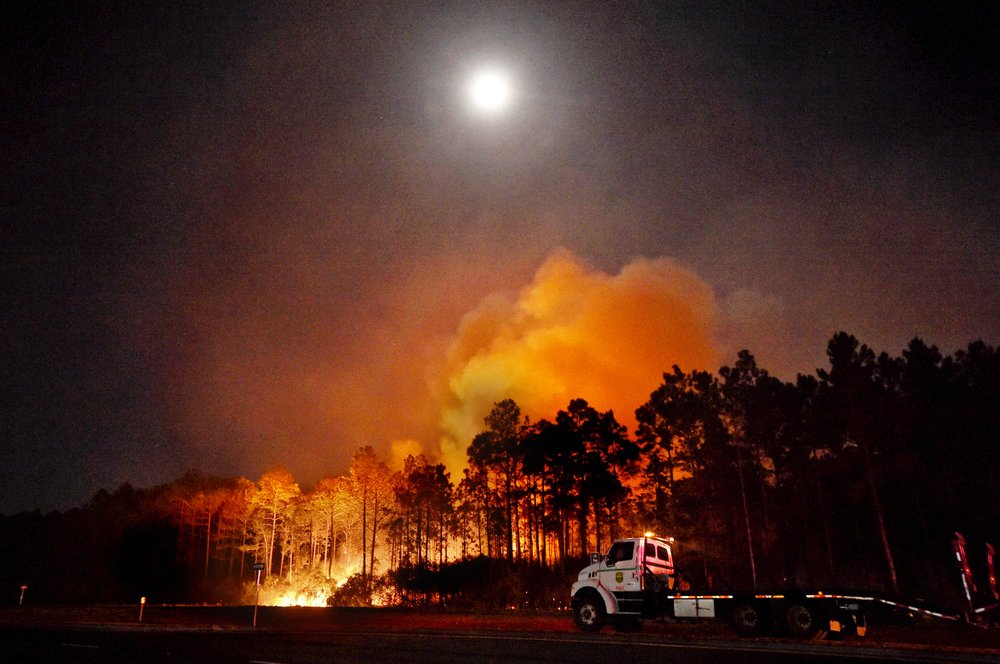 Update — As of 9:00 p.m., the fire remains estimated at 2,000 acres and 35 percent contained. Winds upwards of 20 mph had earlier driven embers across Interstate 10. Approximately 17 structures have been lost to the fire.

An increase in wind speeds and a decrease in humidity are just two of several factors challenging firefighters as they work to contain a 2,000-acre wildfire in Santa Rosa County.

Agricultural Commissioner Nikki Fried confirmed Thursday the blaze has destroyed at least 17 homes and buildings since it began on Monday. She said the fire began as a prescribed burn by a private contractor on private land that got out of control.

Coined the “Five Mile Swamp Fire,” the blaze has forced a stretch of Interstate 10 between mile marker 22 and 31 to shutdown. Authorities said the stretch will remain closed and provided no timeline for reopening.

“The threat is far from over and there is no rain forecasted and conditions will continue to be increased for fire behavior,” Fried said.

But while DeSantis thanked President Donald Trump for the federal support, Fried voiced frustration with federal aid still yet to arrive for Hurricane Michael.

Fried told reporters downed debris from the storm remains a great concern in the panhandle, particularly during the dry season.

“Unfortunately, the federal assistance dollars did not come fast enough,” Fried said. “We still are waiting today for the block grant dollars the federal government was supposed to (send) to all of our agriculture in that area.”

She said the federal aid would have allowed some individual owners to take some of the timber off of their land to help protect life and property.

“This is a significant threat,” Fried said. “Something that I definitely lose sleep over every single day. Every time we hear a new fire starting in the panhandle, I get very worried because knowing that that is not clear to any level of certainty to really prevent additional fires.”