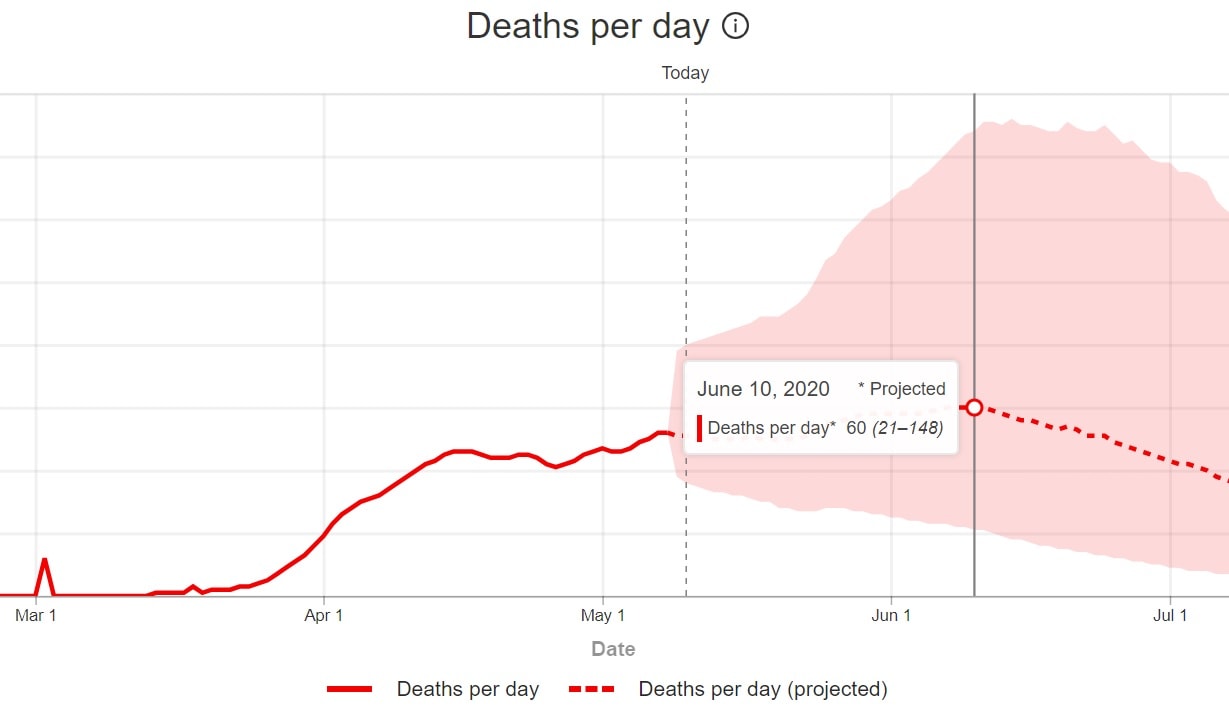 Despite flattening the curve of the COVID-19 pandemic, Florida may still yet see the peak of the disease’s fatal effects in the coming months.

Instead of the pandemic nearly dissipating by June, as in earlier predictions, deaths will instead hit their apex next month and continue into August, according to a model produced by The Institute for Health Metrics and Evaluation (IHME). It predicts 5,440 Floridians could die by Aug. 4, around 1,500 more than its last prediction.

Sunday marked the first update to the model since Phase One of the state’s reopening began in earnest. The University of Washington-associated institute released the previous prediction Monday, day one of Phase One.

The model’s average projection puts the peak in the second week of June, when 60 Floridians could die daily. Deaths could peak at 152 a day in mid-June or they may peter out from now till August.

The model estimates 52 people died due to COVID-19 on Friday, the most in one day. State records show fatal cases peaked on April 17 when 56 Floridians died.

As of Sunday, 1,721 Floridians have died, according to the Department of Health.

With last week’s update, the model began tracking how much people are out and about using cellular location data. IHME factors mobility data into its model of the coronavirus’ spread.

Mobility dropped to 44% of the average when the state’s stay-at-home order began in April, but had climbed up to 57% by the end of the lockdown. As reopening begins, the model expects daily travel to reach 64% of the previous normal.

Despite the grimmer outlook for Florida, expected in part with society’s reopening, the predicted peak is much lower than what the model showed before the lockdown. When IHME predicted 6,766 Floridians could die by August, it anticipated 174 daily deaths in a peak expected around this weekend.

After the stay-at-home order began, the model predicted 4,000 Florida deaths by early August with a peak of 112 deaths per day.

The state has more than 20,000 hospital beds at its disposal, according to the model, more than enough to account for even its projected worst-case scenario.

IHME’s model does not factor in that Miami-Dade, Broward and Palm Beach counties, the state’s COVID-19 hot spots, did not reopen with the rest of the state last week. However, Gov. Ron DeSantis has cleared Palm Beach County to reopen Monday.

Additionally, it assumes existing restrictions will remain in place into August, but that is not the case. Barbershops and salons also reopen Monday.

The Governor has expressed frustration with reports citing the institute’s and other models, particularly earlier projections that were far higher before he issued a statewide stay-at-home order.

Nationally, the model predicts between 102,783 and 223,489 fatalities by early August, but it lists 137,184 as its average, about 3,000 more than its previous average. The model suggests the nation passed its peak in fatal cases in mid-April.