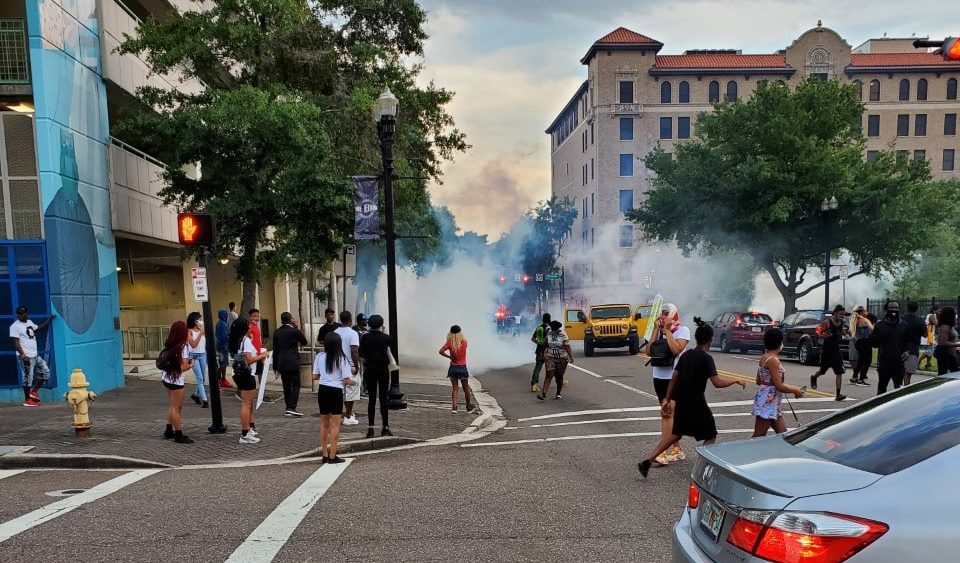 Businesses that sustained damage during civil rights protests in downtown Jacksonville can now get financial assistance.

The city launched a new program Wednesday to provide grants for merchants and retailers whose brick-and-mortar shops were damaged by vandalism between May 30 and June 1 as protests raged in the downtown Jacksonville area. The city is now requesting business owners who want to participate in the Downtown Business Financial Assistance Program to send email inquiries to DDBP@coj.net for applications.

May 30 saw the wildest clashes between Jacksonville Sheriff’s police officers and demonstrators in the urban core. While there were peaceful protests for about three hours that day, chaos erupted at night. After initial protesters left, police launched tear gas and flash bangs at throngs of demonstrators on downtown side streets and on Bay Street just west of police headquarters.

Dozens of people were arrested and demonstrations returned May 31 near the Duval County Courthouse. Police again arrested dozens more protesters, though State Attorney Melissa Nelson would later dismiss most of the charges leveled against the demonstrators on May 31 because there was no cause for arrest. Some 48 cases were dismissed.

That’s also when Mayor Lenny Curry instituted an overnight curfew in an effort to restore order in downtown.

Some store fronts saw glass windows smashed by some of the demonstrators during the weekend of civil strife by residents who were protesting police brutality in the wake of George Floyd‘s murder by a police officer in Minneapolis May 25.

Jacksonville’s business relief program is offering a one-time payment of up to $1,500 to any commercial operation that sustained damage to their buildings during the unrest.

The businesses eligible for the relief must be located in downtown Jacksonville. There is also a list of criteria including:

— The applicant must demonstrate an impact of property damages or vandalism due to the civil unrest that occurred between May 30 and June 1.

— The applicant must either own the building or represent that the business is responsible for the repair to the property.

— Only one business may apply per address.

— The applicant must provide a copy of the police report.

— The applicant must provide copies of receipts documenting repair costs or estimates for the work to be completed.

— Property damages must not have otherwise been mitigated or covered.