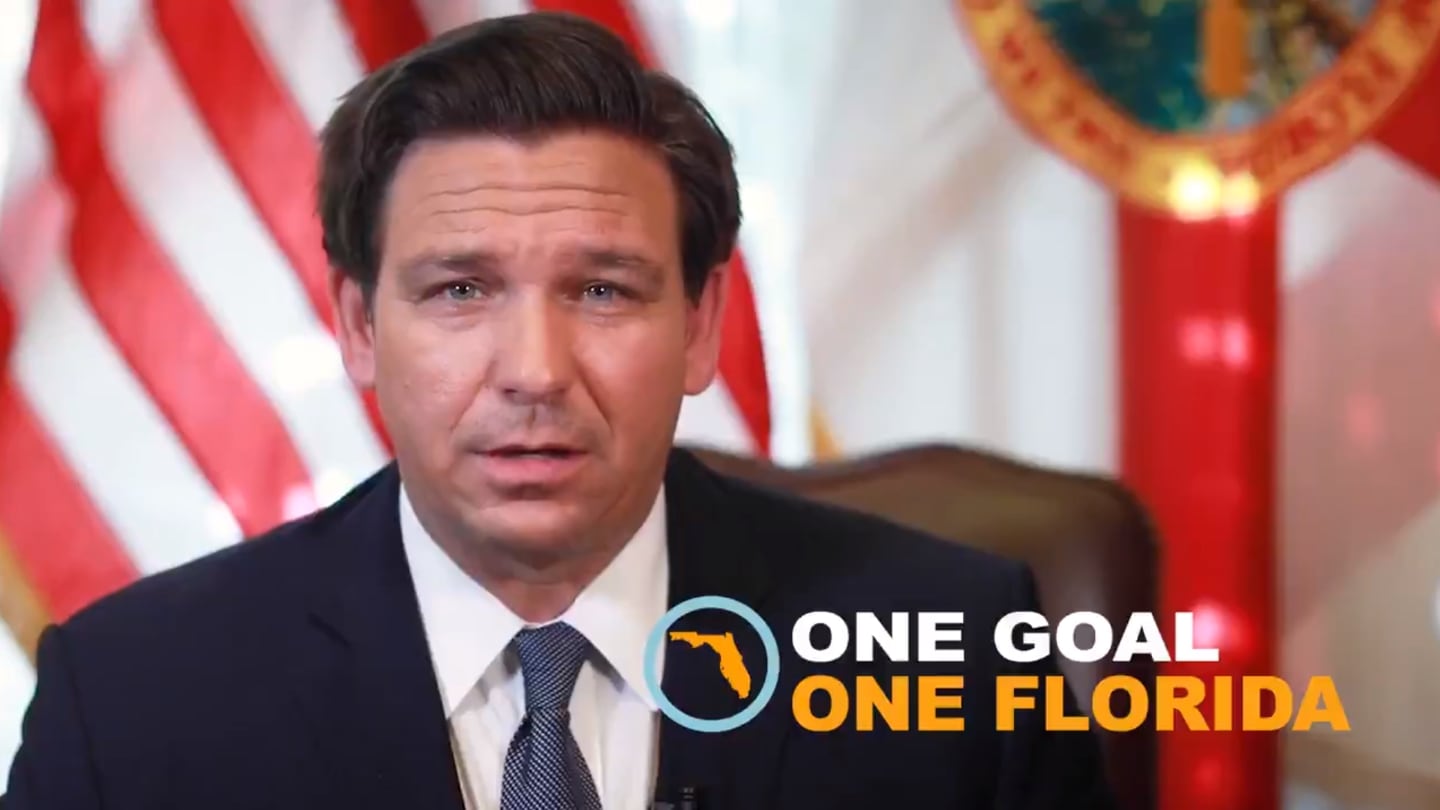 "One Goal One Florida" is the Governor's new theme.

With the state managing crises on two fronts, Gov. Ron DeSantis is launching a revamped social media campaign trying to unite Floridians behind a common goal.

State health officials have confirmed the deaths of more than 1,000 Floridians this week alone while Hurricane Isaias threatens the Atlantic coast.

With both threats bearing down on the state, the Governor launched his “One Goal One Florida” campaign Thursday during a brief televised evening address. And Friday morning, he followed that up with a minute-long closeup video over the backdrop of inspirational piano electronica noodlings.

COVID-19 has been a significant challenge for all Floridians but I’m 100% confident we can, and will, overcome this challenge. To that end, I’m asking all Floridians to join me in this important effort – One Goal One Florida. pic.twitter.com/QSgoa4Okxd

The video hits upon the same precautionary measures as before — protecting the vulnerable, practicing good hygiene, social distancing and wearing masks — but the rebrand coincides with the arrival of new Communications Director Fred Piccolo this week.

“These simple yet effective steps are the same steps you’ve been hearing about for months,” DeSantis said. “Now is not the time to let up. We all have one goal as one state.”

Ahead of his first day in the Governor’s Office, Piccolo and Chief of Staff Shane Strum told Florida Politics the communications team would emphasize social media and multimedia going forward, with Piccolo pointing to the internet’s “30-second YouTube culture.”

For months, the Governor has addressed the state and reporters from a podium bearing the mantra “Safe. Smart. Step-by-Step.” But Florida has spent nearly two months frozen on Phase Two as outbreaks surged across the state.

Asked about the shifting message Friday, DeSantis told reporters his administration is encouraged by declining hospitalization admissions and a falling statewide hospital census.

“We definitely believe that we’ve seen a peak there, so we believe we have momentum, and now’s the time to just remind people you can make a difference by following these guidelines,” he added.

“The concerns would be if those trends continue in the immediate future that people think that it’s just over. And what we’re saying is, let’s make sure we’re continuing to keep our eye on the ball, focus on going forward.”

That’s what he says happened in late May and early June, when outbreaks exploded across the state after the testing positivity rate had fallen to below 3%. On multiple instances over the past two months, DeSantis blamed protesters for congregating close together and the media for letting the pandemic fall from the news cycle.

The rebrand also comes after recent polling showed support for the Governor and his pandemic response below 50%.

The hurricane is further complicating the pandemic response with testing sites closing temporarily and increasing concerns about hospital capacity.