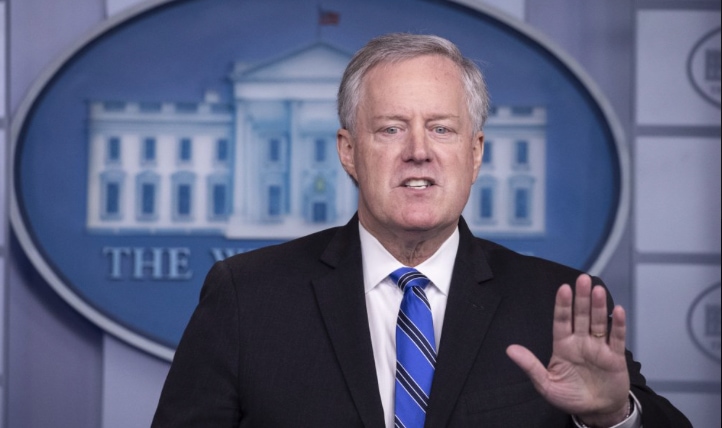 White House Chief of Staff Mark Meadows says that Democrats are the reason there will be no new COVID-19 relief before September. Image via AP.

Slow, grinding negotiations on a huge COVID-19 relief bill are set to resume, but the path forward promises to be challenging.

Both the Trump administration negotiating team and top Capitol Hill Democrats reported progress over the weekend even as they highlighted their differences.

Ahead of Monday’s talks, all sides predict a long slog ahead despite the lapse of a $600-per-week supplemental COVID-19 jobless benefit, the beginning of school season and the call of lawmakers’ cherished August recess. Several more days of talks are expected, if not more.

The White House is seeking opportunities to boost President Donald Trump, like another round of $1,200 stimulus payments and extending the supplemental jobless benefit and partial eviction ban. House Speaker Nancy Pelosi, the top Democratic negotiator, appears intent on an agreement as well, but she’s made it clear she needs big money for state and local governments, unemployment benefits and food aid.

Appearances by the principal negotiators on Sunday’s news shows featured continued political shots by White House chief of staff Mark Meadows at Pelosi for turning down a one-week extension of the $600 benefit in talks last week.

Meadows, however, is understaffed during the talks and seems to struggle with his read on Pelosi. He spent much of his time on CBS’ “Face The Nation” attacking her for opposing a piecemeal approach that would revive jobless benefits immediately but leave other items like food stamps and aid to states for later legislation. She is insisting on a complete package.

Areas of agreement already include the $1,200 direct payment and changes to the Paycheck Protection Program to permit especially hard-hit businesses to obtain another loan under generous forgiveness terms.

But the terms and structure of the unemployment benefit remains a huge sticking point, negotiators said Sunday, and Meadows hasn’t made any concessions on the almost $1 trillion Pelosi wants for state and local governments grappling with pandemic-related revenue losses.

“We still have a long ways to go,” Meadows said, adding, “I’m not optimistic that there will be a solution in the very near term.”

Pelosi said she’d consider reducing the $600 benefit for states with lower unemployment rates. Republicans want to cut the benefit to encourage beneficiaries to return to work and say it is bad policy since it pays many jobless people more money than they made at their previous jobs.

“But in this agreement it’s $600,” Pelosi said on ABC’s ’This Week.″ “Yes, they might anecdotally have examples, but the fact is, is that they’re subjecting somebody who gets $600 to scrutiny they won’t subject some of the people that are getting millions of dollars” through the loan program for small businesses that keep employees on their payrolls.

Another sticking point is that Republicans want to give more school aid to systems that are restarting with in-school learning, even as Dr. Deborah Birx, Trump’s top coronavirus adviser, cautioned that schools in areas with spikes in cases should delay reopening

“In the areas where we have this widespread case increase, we need to stop the cases, and then we can talk about safely reopening,” Birx said on “This Week.”

The House passed a $3.5 trillion measure in May, but Republicans controlling the Senate have demanded a slower approach, saying it was necessary to take a “pause” before passing additional legislation. Since they announced that strategy, however, coronavirus caseloads have spiked and the economy has absorbed an enormous blow.