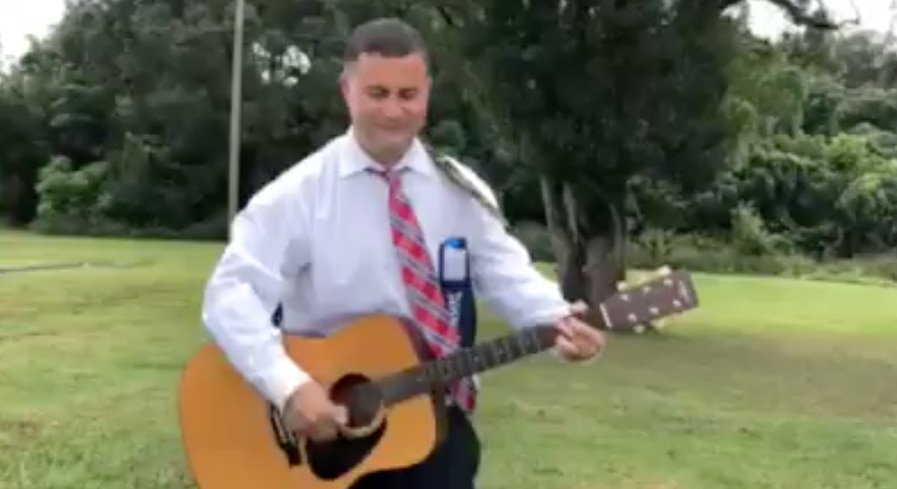 The Democratic congressman performs his "UnitySong."

Perhaps in another universe, Darren Soto‘s big claim to fame might be as front man for his folk-rock band the Orange Creek Riders, rather than for his day jobs in this universe, as a lawyer and a congressman from Florida’s 9th Congressional District.

In that other universe, a guy might draw a following wearing a congressman costume, strumming a six-string, and belting out a folk song, starting with, “Too many walls have been built. Too many lines have been drawn. Too many bombs could still blow us up to kingdom come.”

A couple days out from Election Day, the Kissimmee Democrat can’t resist.

On Sunday, Soto performed his original “UnitySong” at a drive-in Joe Biden campaign rally in Kissimmee that was headlined by Jill Biden. On Monday his campaign released, on its Facebook page,  a video of him performing the song.

Soto is seeking to win a third term in CD 9 Tuesday in a contest with Republican nominee Bill Olson. While Soto campaigned through the weekend, much of the campaigning was in conjunction with or in direct support of Biden’s campaign to win Florida in the presidential election.

With only one day left until Election Day, Soto is directing all of his energy on getting voters to the polls, his campaign stated in a news release announcing the video.

He has turned to his music before, with occasional political shows featuring the Orange Creek Riders. Last year, for a while, he hosted a set of podcasts dubbed “Rock and Politics,” mixing his views and rock songs he selected on a theme.

His latest performance is more in the vein of traditional folk singers. The lyrics warn of people seeking to spew hate and divide the nation, a great plague, people spreading anger, smokestacks that blacken the sky, people denying climate change, and people losing trust.

Eventually, the congressman gets to the point.

“Save the whole world from a terrible end.

“We’ll all sing a chorus of family human.

“They try to divide us but united we stand.

“We must vote for Biden.

“And united we stand.

“And united we stand.”