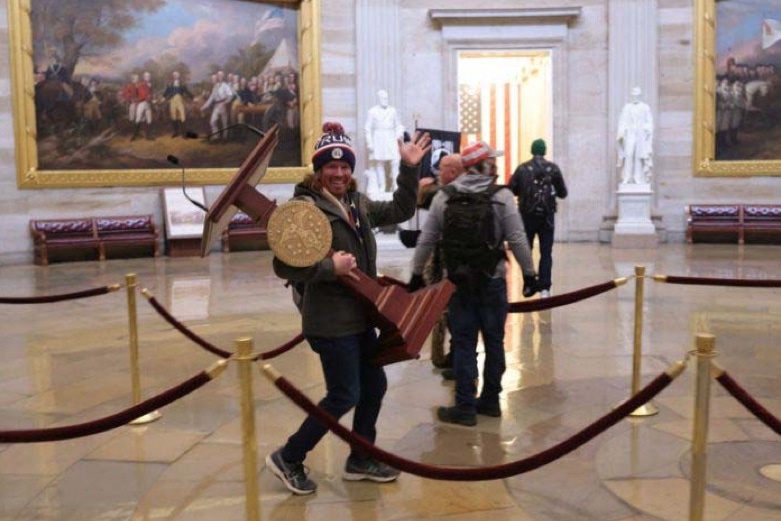 More defendants from Florida than any other state.

Of the 40 people arrested and charged so far in federal court in the District of Columbia related to crimes committed in the siege of the U.S. Capitol last week, at least five are Florida residents, more than from any other state.

The U.S. Department of Justice has unveiled a new website detailing charges for defendants being prosecuted in Washington. The defendants include the five men the Justice Department identified as Floridians: Matthew Council, Michael Curzio, Adam Johnson, Douglas Sweet, and Andrew Williams.

That gives Florida more mug shots in the U.S. Capitol insurrection suspects’ gallery than any other state. Three defendants were listed as Texas residents, three as New York residents, and two each from Maryland, Pennsylvania, and Virginia. The Department of Justice did not specify the states of residence for 10 of the defendants.

The U.S. Attorney’s Office is prosecuting every case for the District of Columbia. However, the website is being touted by other U.S. Attorneys, who pledge to participate in the prosecutions.

There have been other arrests reported. And the FBI has indicated it has more than 200 suspects the bureau is investigating. So far, the 40 listed by the Department of Justice represents only the most visible criminal suspect roundup from the insurrection to date.

Council was arrested in the Capitol during the Jan. 6 siege. He was charged the next day with knowingly entering or remaining in any restricted building or grounds without lawful authority and violent entry and disorderly conduct on Capitol grounds. Council allegedly unlawfully entered the Capitol building, and when stopped by law enforcement, he pushed the officer.

The arresting Capitol Police officer’s statement of facts report reads: “In the course of this effort and while inside the Capitol building, I encountered an adult male who was later identified as Matthew Ross Council. He was part of a larger group but was individually pushing against the barrier to include an emergency door that is kept closed. Once the door was forcibly opened he broke through along with others. During this time, he was continually yelling at police officers trying to contain the scene. When he was deterred from advancing further into the building, Council pushed a uniformed officer of the United States Capitol Police.”

The report says police then pepper-sprayed Council and that: “He spontaneously expressed remorse about pushing the officer and indicated that he did not intend to injure her.”

Curzio and Sweet were arrested together in the Capitol during the siege. They both were charged the next day with identical charges of knowingly entering or remaining in any restricted building or grounds without lawful authority; or knowingly, with intent to impede government business or official functions, engaging in disorderly conduct on Capitol grounds; and violent entry and disorderly conduct on Capitol grounds.

An arresting Capitol Police officer’s statement of facts report reads: “I observed members of the crowd engage in conduct such as making loud noises and kicking chairs, throwing an unknown liquid substance at officers, and spraying an unknown substance at officers. In a loud and clear voice, Capitol Police Officers ordered the crowd to leave the building. The crowd did not comply and instead responded by shouting and cursing at the Capitol Police Officers. I observed that the crowd, which at the time was located on the Upper Level of the United States Capitol Visitors Center near the door to the House Atrium, included the six individuals” who were subsequently arrested. They included Curzio and Sweet.

Johnson, 36, was arrested last Friday and charged with one count of knowingly entering or remaining in any restricted building or grounds without lawful authority; one count of theft of government property; and one count of violent entry and disorderly conduct on Capitol grounds.

He was arrested after being identified by Capitol Police from the widely circulated Getty Images photograph of someone carrying Speaker Nancy Pelosi‘s lectern through the Capitol, by subsequent pictures published by the Sarasota Herald-Tribune, and by a phone call from a tipster, according to a statement of facts report from the FBI special agent who eventually charged him.

Williams was arrested Tuesday and charged with one count of unlawful entry of a restricted building and one count of disorderly conduct on Capitol grounds. He is a Sanford firefighter.

A statement of facts report has not yet been released detailing the allegations against Williams.

Another man from Florida was the sixth reported to have been arrested, John Anderson of St. Augustine, was not listed on the new Justice Department website.

nextLast Call for 1.14.21 — A prime-time read of what’s going down in Florida politics