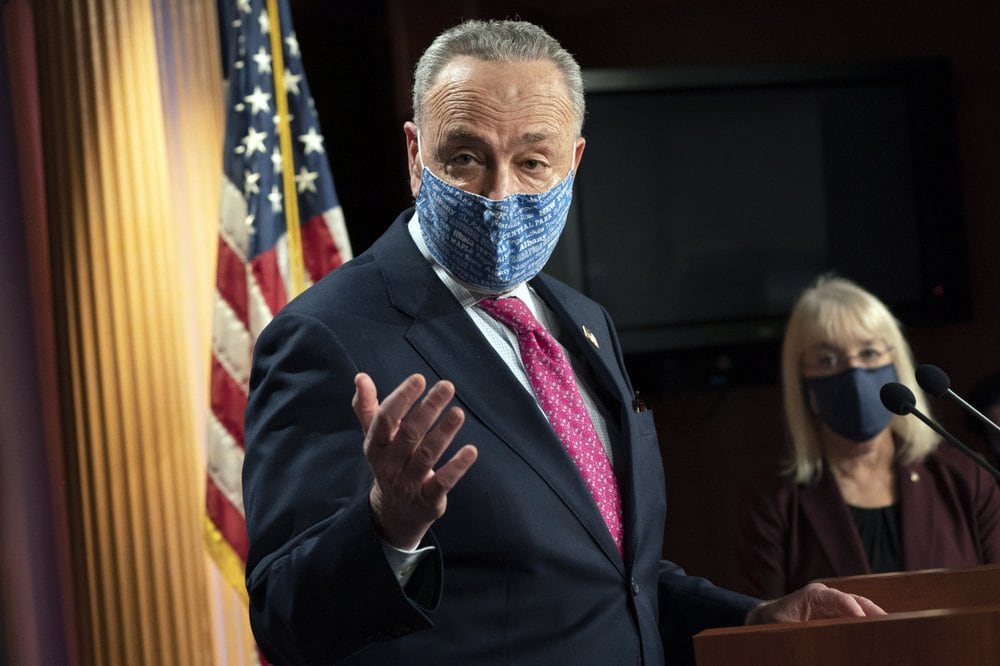 The next steps remain highly fluid.

Senate Democrats are preparing to push ahead quickly on President Joe Biden’s $1.9 trillion COVID-19 relief package even if it means using procedural tools to pass the legislation on their own, leaving Republicans behind.

Senate Majority Leader Chuck Schumer told senators to be ready to vote as soon as next week on a budget reconciliation package that would lay the groundwork for swift passage. Coming so soon in Biden’s administration, the action provides a first test of Republican opposition to the White House priorities as well as to the new President’s promise of a “unity” agenda.

“The work must move forward, preferably with our Republican colleagues, but without them if we must,” Schumer said after a private meeting of Democratic senators.

“Time is of the essence to address this crisis. We’re keeping all options open on the table.”

Unwilling to wait for Republicans who argue Biden’s price tag is too high and his priorities too wide-ranging, Democrats are flexing their newfound power as they take control of the Senate alongside the House and White House.

It is the first time in a decade the party has held the full sweep of power in Washington, and Democrats say they have no time to waste trying to broker compromises with Republicans that may, or may not, happen. They have watched Republicans use similar procedural tools to advance their priorities, most recently the Donald Trump administration’s GOP tax cuts.

The fast-moving events days into the new majority on Capitol Hill come as the White House continued meeting privately with groups of Republican and Democratic lawmakers in hopes of striking a bipartisan agreement. Biden’s COVID-19 aid package includes money for vaccine distribution, school reopenings and $1,400 direct payments to households and gradually boosts the federal minimum wage to $15 an hour over five years.

The next steps remain highly fluid.

And the dozen senators emerging from a lengthy private meeting with the White House on Sunday evening are talking on their own to try to craft a more targeted bill. The bipartisan senators assembled privately again Monday evening.

White House press secretary Jen Psaki told reporters earlier Tuesday that Biden is still looking to negotiate on an aid package, while putting a priority on acting swiftly before aid lapses in March.

“He laid out his big package, his big vision of what it should look like, and people are giving their feedback,” Psaki said. “He’s happy to have those discussions and fully expects it’s not going to look exactly the same on the other end.”

Sen. Susan Collins, a Maine Republican, who led a bipartisan effort for the last $900 billion relief package, is working again with the senators on crafting an alternative package that she has said would be more focused on money for vaccine distribution and tailored economic assistance to the neediest Americans.

Collins said Tuesday that the White House made good on its commitment to deliver a more detailed accounting of the proposed expenditure. But she said the group is still waiting for data on how much funding remains unallocated from past relief measures that, by her tally, totals a whopping $1.8 trillion still unspent.

Congress has approved some $4 trillion in emergency aid since the start of the coronavirus pandemic last year, a stunning outlay and the largest rescue package in the nation’s history.

Senators from both parties who joined the White House call over the weekend agreed the priority needs to be standing up the country’s faltering vaccine distribution system.

With the death toll climbing, and new strains of the virus threatening more trouble ahead, ensuring vaccinations appears to be crucial to stemming the COVID-19 crisis.

Several senators from both parties also said they want the $1,400 direct checks to be more targeted to those in need. They also want an accounting of what remains from previously approved aid bills.

But Sen. Bernie Sanders, an independent from Vermont and the incoming Budget Committee chair, said he is already working on the budget package for next week and expanding it to include Biden’s proposal to raise the federal minimum wage to $15 an hour over five years.

Raising the wage is a long-running Democratic priority that would essentially double the current $7.25 hourly wage set the last time the party was in control in the Obama administration. Advocates say the pay raise would boost millions of full-time workers from poverty.

“There is a consensus,” Sanders told reporters at the Capitol. “If Republicans are not prepared to come on board, that’s fine. We’re not going to wait. We’re going forward soon and aggressively.”

previousU.S. surging vaccine to states amid complaints of shortages