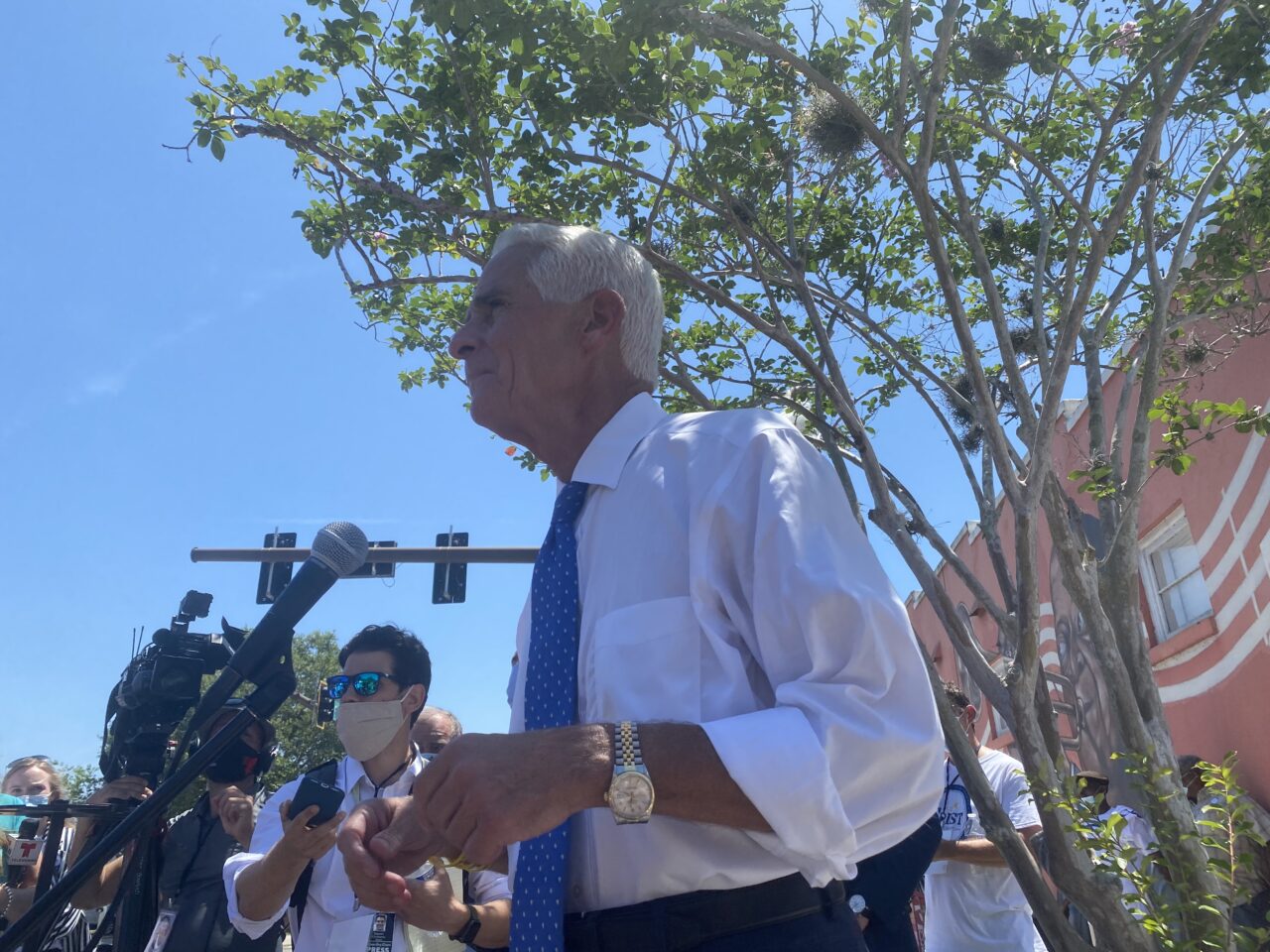 They love Crist. But perhaps not as much as they dislike DeSantis.

Despite sweltering heat under crystal clear cloudless skies, with nothing to block the intense midday Florida sunshine, about 150 people showed up to support U.S. Rep. Charlie Crist as he officially announced his bid for Governor.

The event saw groups sectioning themselves off into whichever slice of shade they could find, some holding sweat-dripped signs and many swapping out less forgiving fabric for a “Florida for All” shirt summing up Crist’s new campaign motto.

But even though Crist fans were fashioning their own fans, the mood was jovial, with gospel singers opening the show before an all-star lineup of local Democrats took the stage.

Ben Diamond, a State Representative in line to lead the party in the House in 2022, set a tone that resonated throughout the afternoon: the current administration is an “absolute train wreck.”

Diamond pilloried incumbent Republican Gov. Ron DeSantis, arguing his COVID-19 response and vaccine rollout, has amounted to nothing more than scoring political points among his base and launching what he describes as “culture wars” among Florida residents.

Onlookers at the event agreed in what almost seemed like an ‘anyone but DeSantis’ attitude.

Terry Beernaert, waiting in line to get into the event, located in the burgeoning Deuces Live, said she changed her party affiliation from Democrat to Republican — not because she had shifted her political ideologies or even because she was employing political strategy with voting in Republican primaries, but because she was afraid DeSantis would prioritize members of his own party for vaccines.

Her concern wasn’t without merit. After all, DeSantis saw himself in the midst of a scandal earlier this year after reports surfaced criticizing him for scheduling a vaccine pop-up event in Lakewood Ranch, a wealthy and largely Republican section of Manatee County. Later, he faced criticism for using Publix to deliver vaccines throughout the state after the company donated six figures to his campaign.

While most at the kickoff rally were avid Crist supporters — some of them have been spotted at Crist events for years, even before he was a Democrat — a few were there to show support for anyone who could make DeSantis a one-term Governor.

“We need to start getting out and supporting whoever is going to run,” said Maura Hedrich, a Democrat who volunteered for President Joe Biden’s 2020 campaign.

She likes Agriculture Nikki Fried, and she beamed at the mention of U.S. Rep. Val Demings. Both are considering gubernatorial bids of their own. But she hoped, perhaps with more optimism than is called for in such matters, that Democrats would coalesce against DeSantis rather than running against each other.

“We still need to go up against Marco Rubio, so there’s plenty of places to go,” Hedrich said of Demings’ possibly running for U.S. Senate. She also speculated that Fried, rather than seeking the Governor’s mansion, could instead run for Crist’s congressional seat, which he will vacate to run for Governor.

Others were 100% in for Crist. Despite hating to admit it, Larry Potter said he’s worried that a woman can’t win in a statewide election.

“I think there’s too many conservatives, or actually, ignorant people in Florida to elect a woman Governor. I like Nikki, but again, I’m more educated than some of these people who voted for DeSantis,” Potter said.

Pinellas County Commissioner Janet Long, a longtime Crist ally, also took to the podium Tuesday to tout his experience. And, like others, lamented current leadership.

Specifically, Long pointed to Crist’s previous tenure as Governor — he served one term after being elected as a Republican in 2006. During that term, Crist vetoed the controversial Senate Bill 6 lawmakers approved in 2010. Teachers and their unions rallied hard against the measure, a sweeping merit pay effort.

His veto, she said, came after the then-Republican Governor met with a group of Democrats to ask why they hated the bill so much.

“He sat with us for the rest of our meeting, and then he left,” Long said.

The subsequent veto, she said, was a huge win for education.

Now, Democrats hope his ability to work across the aisle as Governor will translate to victory next year.

“He can attract people like me,” said Joe Brandao, a millennial voter who traveled to St. Pete from Broward County for the event. “He can attract Republicans, independents, Democrats, every party in the state.”

And Beernaert, an older Democrat, helped explain why.

“He’ll stop at the grocery store and have a whole conversation with you.,” she said. “How many politicians can you say that about?”