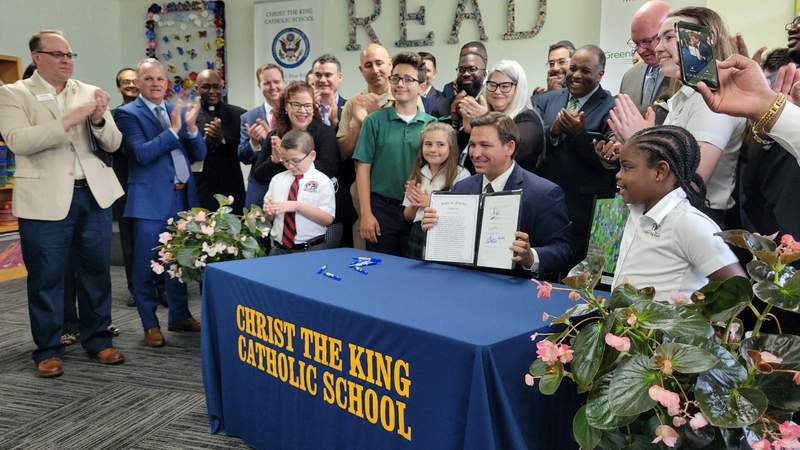 Conservatives have raised the issue of liberal indoctrination in recent weeks.

The bill (HB 233), delivered to the Governor’s desk Friday, would prohibit the state Board of Education and Board of Governors from shielding students, staff and faculty from certain speech. Additionally, the bill would require those academic governing bodies to annually survey the viewpoints of college and university professors “to assess the status of intellectual freedom and viewpoint diversity.”

Under the bill, school leadership couldn’t “shield” students from free speech protected under the First Amendment. They couldn’t limit students’ access to ideas and opinions they may find uncomfortable, unwelcome, disagreeable or offensive.

Many conservatives complain that college campuses indoctrinate students with liberal beliefs. Conservatives have elevated the issue in recent weeks as part of a broader culture war in academics.

At DeSantis’ request on Thursday, the Board of Education voted to prohibit schools from teaching “critical race theory,” which is based on the premise that racism is embedded within American society and institutions. The controversial theory — which isn’t taught in Florida public schools — has become a national flashpoint for Republicans in the lead-up to the 2022 elections.

HB 233 authorizes the recording of lectures without consent, but limits content for personal education, or in connection with a complaint or as evidence in a criminal or civil procedure. The recording can only be published with the lecturer’s consent. Doing so without consent could result in a lawsuit.

The bill is part of a package of education proposals delivered to DeSantis’ desk. Among them is a measure to require moments of silence in public schools (HB 529) and a measure to expand civics curricula with “Portraits in Patriotism” lessons (HB 5).

Many conservatives say the measure would protect their speech. But the bill’s critics, including college faculty across the state, say it would have a chilling effect on free speech. Some critics include conservative professors themselves.

During debate on the Senate floor in April, Rodrigues brushed off suggestions the state could use the survey results in malicious ways toward faculty.

DeSantis has until June 26 to act on the bill, which would take effect on July 1.