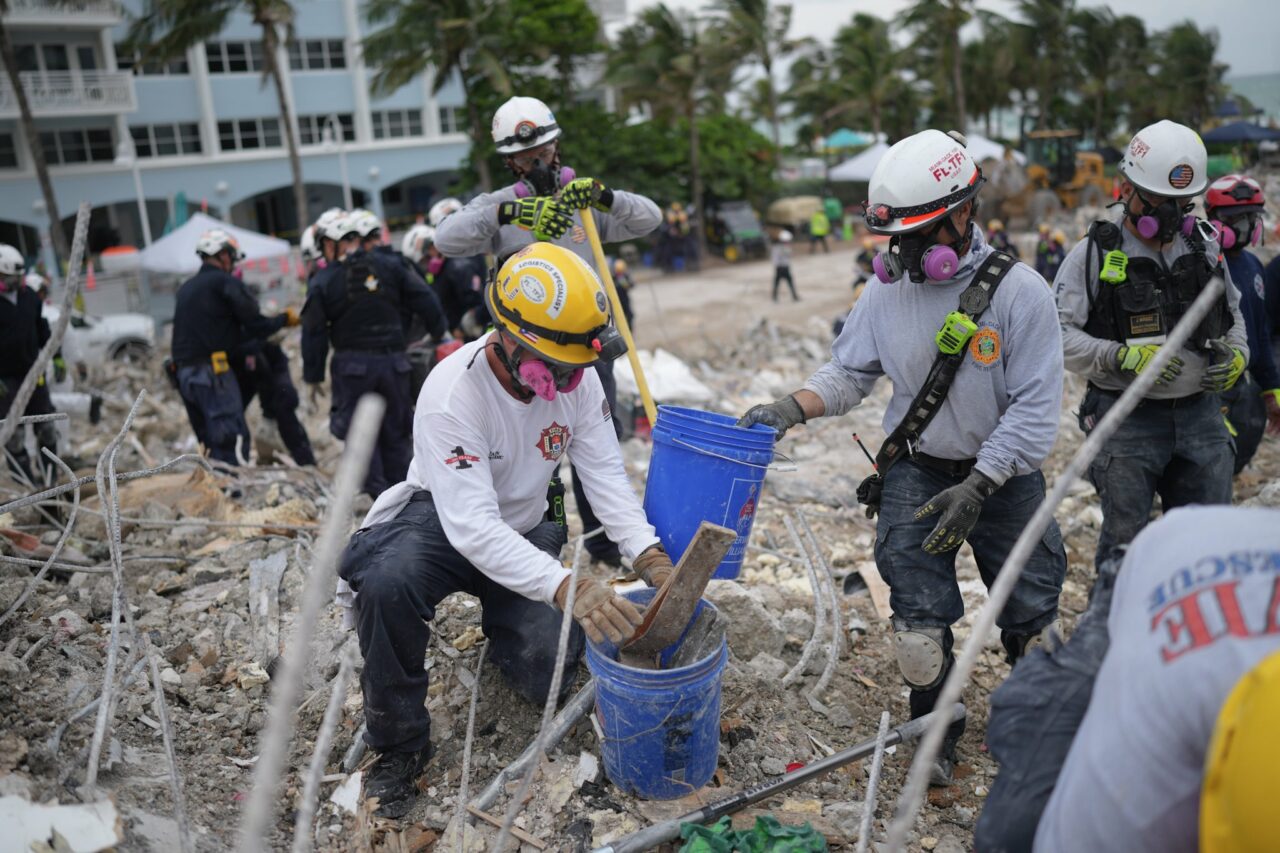 Three workers have been hospitalized with on-site injuries, but are in stable condition.

Crews searching through the rubble of the collapsed Champlain Towers South condo uncovered 15 additional bodies overnight and through the day Friday, bringing the total confirmed dead since June 24 to 79, according to Miami-Dade Mayor Danielle Levine Cava.

“This recovery is moving forward with great urgency as we work 24 hours a day on the pile to recover victims and bring closure to all the families still waiting,” she said at a press briefing held shortly after noon on Friday. “We want to bring them news as quickly as we possibly can.”

Workers have removed more than 13 million pounds of concrete and debris from the wreckage at 8844 Collins Ave. in Surfside using heavy machinery and 60 trucks to transport materials offsite.

“The pile that originally was approximately four or five stories (high) is now at ground level,” Surfside Mayor Charles Burkett said. “The progress that our search and rescue teams are making is really incredible.”

The arduous recovery effort has taken a toll on personnel, Miami-Dade Fire Chief Alan Cominsky said when asked to confirm reports that a front-line worker had been injured by machinery onsite.

“Over the past 24 hours, we did have two individuals that were injured,” he said. “One was cardiac in nature and was transported to the hospital and is in a stable condition. The other individual was one of the task force members, (who) received a laceration that did require some sutures but is stable and doing alright as well.”

A vehicle also ran over the foot of one Miami-Dade police officer at the site Thursday, Director Freddy Ramirez added.

“He was transported to the hospital,” he said. “I spoke to him yesterday right after it happened. I spoke to him last night and his wife. They’re in good spirits. He’s just frustrated he can’t be here to contribute.”

Two-hundred people residing or thought to have been in the tower are accounted for, with 61 still unaccounted for, the Mayor said, adding that police detectives are auditing the list of those still missing and verifying reports the county receives in order to maintain and provide accurate information.

Of the victims found, Miami-Dade has identified 53 people, she said. The county has released the names of 38 victims to the public so far. Family members of the those identified have been informed of their discovery.

“All those who have passed … are leaving behind loved ones,” she said. “They’re leaving behind devastated families. The magnitude of this tragedy is growing each and every day. It’s an aching hole in the center of this close-knit family here in Surfside, a beautiful, small, close-knit community. We know that the hard work of beginning to rebuild is just beginning for so many of these families, and we are committed to staying with them every step of the process.”

Investigations into the cause of the collapse are ongoing and will be complicated. State Attorney Katherine Fernandez Rundle has said she intends to involve grand jurors.

“Today, in addressing the members of the Spring Term Miami-Dade County Grand Jury, I requested, pending the conclusion of the longterm investigation that will yield the cause of the collapse, that they look into how we can prevent such a disaster from occurring again, not just in Surfside, and not just in condominiums, but in all buildings and structures in the coastal, intercoastal and surrounding areas of our county,” Fernandez Rundle said Wednesday in a statement. “The members of the Grand Jury enthusiastically agreed to accept this challenge and voted in favor of conducting such an investigation.”

Earlier this month, Levine Cava said the National Institute of Standards and Technology had begun to employ LiDAR technology to map the interior of the part of the tower that remained standing. A state-hired demolition team brought that portion down at night on Sunday.

“NIST has made very significant progress in tagging and transporting pieces of forensic evidence from the pile,” she said. “They’ve now collected over 200 pieces of evidence, and they recently deployed a scientist from the Physics Measurement Lab in Washington to assist with analysis.”

Crews are using GPS technology to place personal items found at the collapse site near families’ units to assist in identifying whom they belong to, Burkett said.

“Those items are being guarded 24 hours a day,” he said. “Everything you can imagine has been recovered and processed. This process will continue until every bit of debris is gone through.”