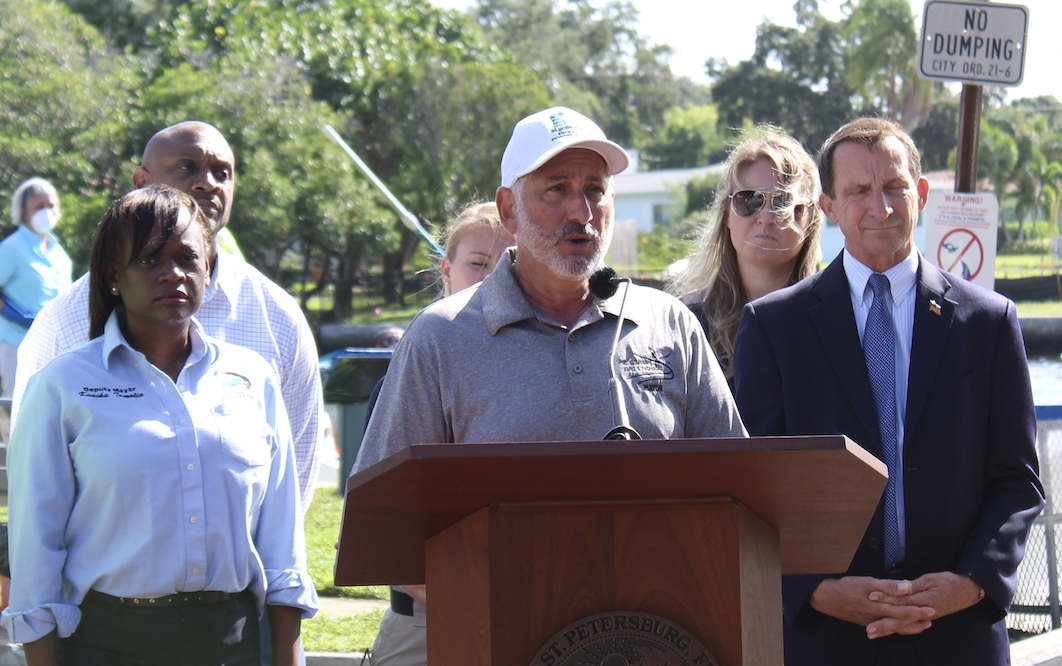 The city has collected more than 500 tons of dead sea life since clean up efforts began July 1.

“We are asking the Governor, please, Pinellas County, St Petersburg, we need your help. This isn’t about politics,” Kriseman said, surrounded by crews casting nets to collect dead fish at Crisp Park. “More help is needed to get these fish out of the water. This is a quality of life issue, it’s an economic and it’s a tourism issue, and it’s really impacting the lifeblood of Florida, and our Gulf Coast.”

The plea from Kriseman was in response to the red tide crisis affecting the Pinellas County coast. The most recent status update provided by the Florida Fish and Wildlife Conservation Commission showed that Pinellas County had the highest concentrations of the algae that causes red tide in the state, with high levels around St. Pete’s coastal area.

At the meeting, Kriseman said the city has had to pull employees from other departments to help with cleanup, including sanitation workers, parks and recreation employees and engineering. Because of the need to pull staff, other projects like potholes, tree trimming, mowing and lot clearing are being delayed.

“We have no idea when this is going to end,” Kriseman said. “We can’t continue doing this forever, because other city services are compromised because we’ve got all our men and women out here working on this issue.”

Charles Hargrove, the city’s storm water, pavement and traffic operations supervisor, said he had 105 to 110 staff members working from his department on the cleanup. Claude Tankersley, the city’s public works administrator, said Hargrove’s staff, combined with other city employees who have been pulled to work on the red tide, make for crews about 200-strong a day.

“We literally are pulling people from every department in the city to do this work because we recognize the importance of it,” Tankersley said.

Kriseman estimated the city has spent around six figures so far — an expenditure not planned in the budget.

“We’re going to have to juggle resources to cover it,” Kriseman said. “Obviously, this is not something we budgeted for.”

As he pleaded for help from the state, Kriseman referenced the 2018 red tide, when then-Gov. Rick Scott declared a state of emergency for impacted coastal counties.

“Even Rick Scott, when he was Governor, declared a state of emergency related to red tide, and sent resources to help,” Kriseman said.

Kriseman said he has yet to hear from the Governor on the matter, but has reached out to the office, along with other high-profile figures like Agriculture Commissioner Nikki Fried, who recently sent a letter to the Governor calling for executive action.

Kriseman also said the city itself has not declared a state of emergency because there is no real benefit to doing so.

“We’ve considered the option of a local state of emergency. We didn’t really see a benefit,” he said. “I don’t want to do it, unless there’s a benefit to doing it. It isn’t going to trigger any additional resources coming in. That has to come from the state level in order for that to happen.”

previous‘Send lawyers, (gambling) and money’: A look at the 2022 ballot initiatives on betting