St. Petersburg City Council member Daren Rice has sent another mailer to voters bashing one of her chief rivals in the race for Mayor, former Pinellas County Commissioner Ken Welch.

Like a flyer that hit mailboxes over the weekend, another received Tuesday hit Welch for accepting donations and endorsements from what the mailer describes as supporters of former President Donald Trump.

The mailer, like previous flyers, also claims Welch used his position of power for personal gain, citing an October 2018 Times story. There doesn’t appear to be an article listed with that exact date, but Times coverage around that period was extensive related to the firing of Welch’s wife, Donna Welch, from her position as reading director at the James B. Sanderlin Neighborhood Family Center. In an editorial dated Nov. 8, 2018, the Times’ editorial board lamented “an obvious conflict of interest” after Welch lobbied public officials to hire St. Pete-based R’Club Child Care to take over a reading literacy program. That group offered to hire Welch’s wife.

The language on both mailers is virtually identical as it relates to criticism of Welch. But the two flyers differed in one major way — the first contained praise for Rice as a progressive leader, while the second made no mention of her whatsoever outside the required disclaimer that the content was paid for by Rice’s political committee, Friends of Darden Rice.

In the days after the first mailpiece, several Welch supporters publicly decried the content as hypocritical. While it is true that Welch’s donor list and endorsers include Republicans, Rice also has numerous contributions from local Republicans, to the tune of thousands of dollars. Many of them are within former Republican Mayor Rick Baker’s sphere of influence.

“This is the height of hypocrisy — after Darden Rice spent the last week dropping bogus and patently false mailers to mislead voters, she doubled down during last night’s Black Caucus forum,” Welch said.

“Here are the facts — Darden has more Trump donors than anyone in the race; she voted to help big developers and then hit them up for big donations — that’s right after voting to limit campaign donations. Some people are willing to say and do anything to get elected — I will not.”

Incumbent Mayor Rick Kriseman, who has endorsed Welch, also came out against the attack.

“This shouldn’t need to be said, but in every way, @Kenwelch is the opposite of Donald Trump. The recent mailers targeting Ken are paid for by Trump supporters/Friends of Darden Rice. Don’t be swayed by this foolishness. Ken is a progressive who draws broad support in every way,” Kriseman tweeted.

This shouldn't need to be said, but in every way, @Kenwelch is the opposite of Donald Trump. The recent mailers targeting Ken are paid for by Trump supporters/Friends of Darden Rice. Don't be swayed by this foolishness. Ken is a progressive who draws broad support in every way.

Welch referenced Rice’s leadership on citywide campaign finance reform, which now blocks city candidates from raising more than $5,000 each per race from outside spending groups. Early in her campaign, Rice came under fire for appearing to violate the spirit of that ordinance.

The campaign material also ignores another major contradiction in its claims, that Rice previously endorsed and helped raise funds to elect colleague Robert Blackmon, a Republican who is now also running for Mayor. She appeared at Blackmon’s campaign kickoff two years ago alongside Baker and made a fiery pitch for contributions for his campaign.

But those contradictions weren’t the only thing Welch supporters took offense to. Both mailers also use stock images of Black individuals. The first showed a Black woman, arms crossed and looking annoyed, next to a claim that “Ken Welch is tied up with Trump backers.”

The second shows an older Black man seated with his arms crossed next to a similar claim.

A Google image search of that photo turned up several results, including a testimonial for the company C3 Medical, an article about the “demographics of osteoarthritis” on GSK Health Partner, and is available on the stock photo site, photostockeditor.com under the search “60 64 years.”

The negative mailers come despite Rice’s previous claim that she would not run a partisan campaign.

Speaking to the Tampa Bay Times when she officially launched her campaign in January (before any Republicans entered the contest), Rice said she was “not planning to run this as a partisan race.”

“I don’t think anybody wants to see another nasty election like what we saw between Baker and (Rick) Kriseman,” she added.

Her reference was to the 2017 Mayor’s race, which Kriseman won after tying Baker to Trump.

A spokesperson for Rice’s campaign, Meagan Salisbury with Blue Ticket Consulting, did not immediately respond to a text message or email requesting comment on the mailers.

This isn’t the first time Blue Ticket Consulting has used the Trump tactic in a race. Two years ago, Salisbury’s husband, Tom Alte, who runs the firm with Salisbury, sent several mailers criticizing Republican City Council member Ed Montanari, also tying him to Trump. Alte was representing Democrat Orlando Acosta at the time, who was running against Montanari. Acosta lost that race and faced backlash, some from fellow Democrats, for the critical campaign materials. 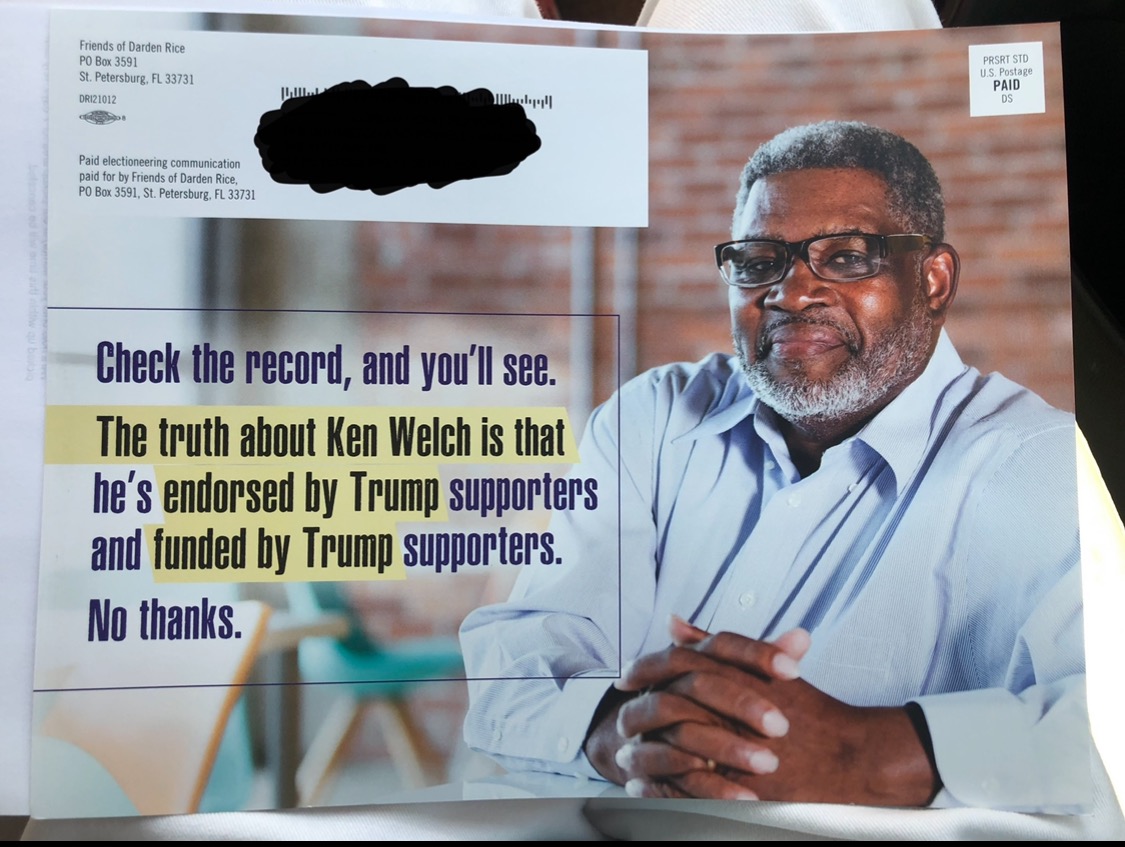 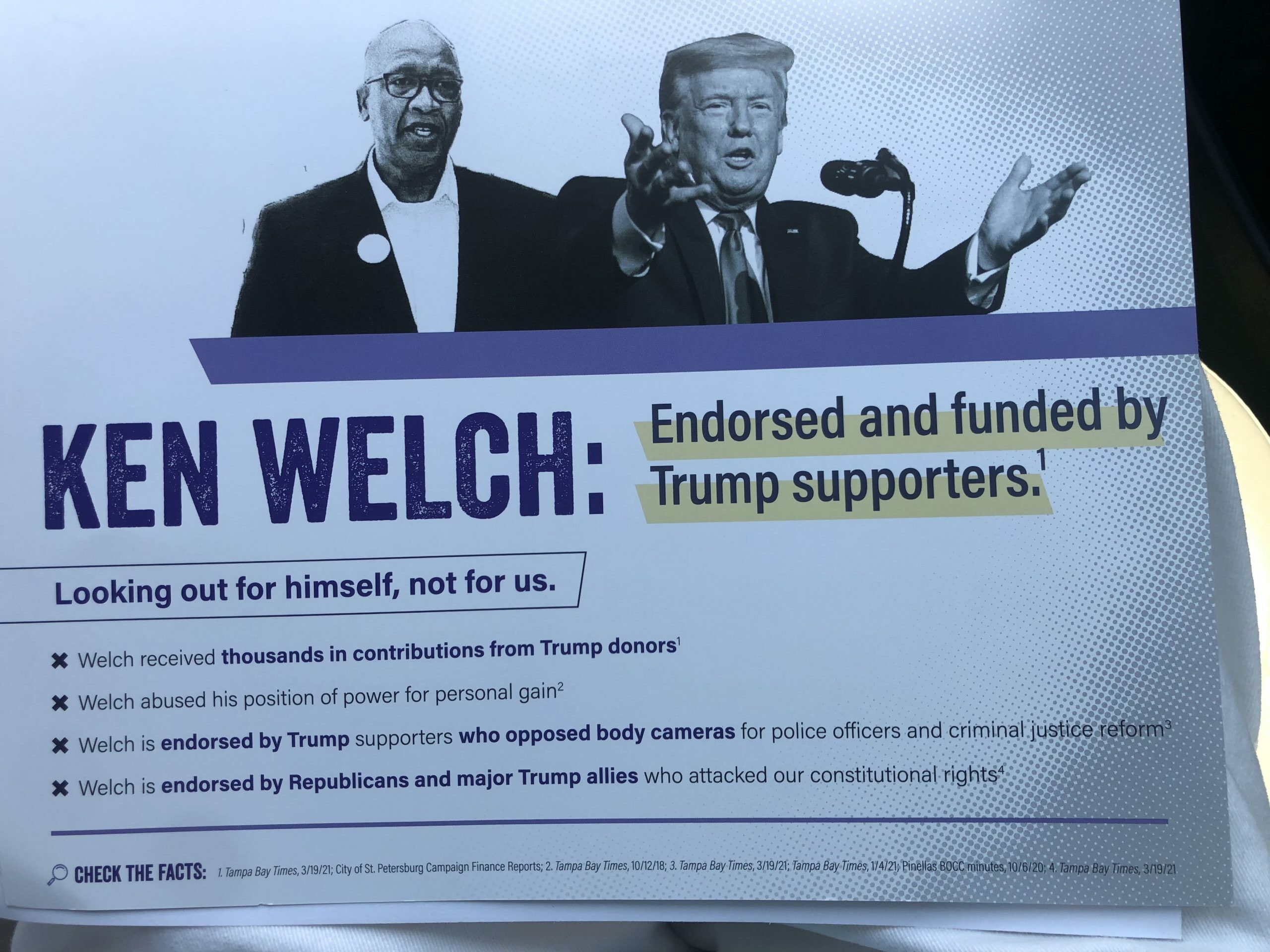