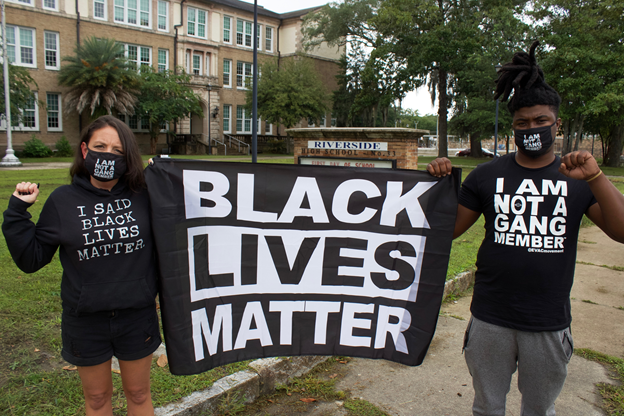 The nationally recognized teacher did not have her contract renewed.

Beyond the Duval County School Board’s decision to mandate masks in schools with the ability for students to opt out, the district also decided to move on from a previous controversy.

By a 6-1 vote, the board voted to settle a lawsuit with former teacher Amy Donofrio, who worked at what was then called Robert E. Lee High School on Jacksonville’s Westside when she chose to hang a Black Lives Matter flag in her classroom.

The terms of the settlement were not disclosed at the meeting. But the decision was made in the interest of avoiding lengthy and costly litigation.

The founder of the nationally renowned “EVAC” Movement encouraging students to find ways to “break free” from their various traumatic experiences, Donofrio saw the BLM flag as an extension of her commitment to the Black youth she taught and a recognition of the struggles they fought to overcome. The school and the district disagreed. She was reassigned from the classroom and the school, and in June, informed her teaching contract would not be renewed.

Meanwhile, Education Commissioner Richard Corcoran had boasted that he had her fired, compounding confusion about the teacher’s status. The district denied that was the case.

“I’m getting sued right now in Duval County, which is Jacksonville, because of a whole classroom memorialized to Black Lives Matter,” Corcoran said, stoking the controversy anew. “We made sure she was terminated.”

In a media release Tuesday morning, the Southern Poverty Law Center took stock of the termination and the resolution. Donofrio says the district’s position upheld racism and abandoned Black students. And the SPLC frames the issue as part of a larger strategy from the state.

“Unfortunately, Ms. Donofrio is not alone. We are seeing teachers across Florida and the country who are facing persecution from their school districts for teaching the truth in schools and for creating safe learning spaces for all children,” said Evian White De Leon, an SPLC attorney on the case.

“Teaching is not just my career; it’s my life, my heart. Being unable to return to my classroom this fall devastates me beyond what I can fully articulate,” Donofrio said. “But what happened to me is symptomatic of a much bigger problem, and that’s the extreme ends Duval County Public Schools has shown it’s willing to go to uphold racism. Administrators and school board members’ cowardly failure to stand beside Black students is exactly why I knew I had to.”

With Duval County Schools negotiating the politics of masking, what’s clear is that other political matters may prove even more difficult to resolve. In this case, they seem to have stopped a promising career that had buy-in from local leaders.

Jacksonville Mayor Lenny Curry, for example, credited Donofrio’s EVAC movement with changing his perspective. He previously used the phrase “at-risk youth” but changed the phrasing to “at-hope” due to their inspiration.

previousJoe Gruters confident GOP is unified, in strong position for 2022