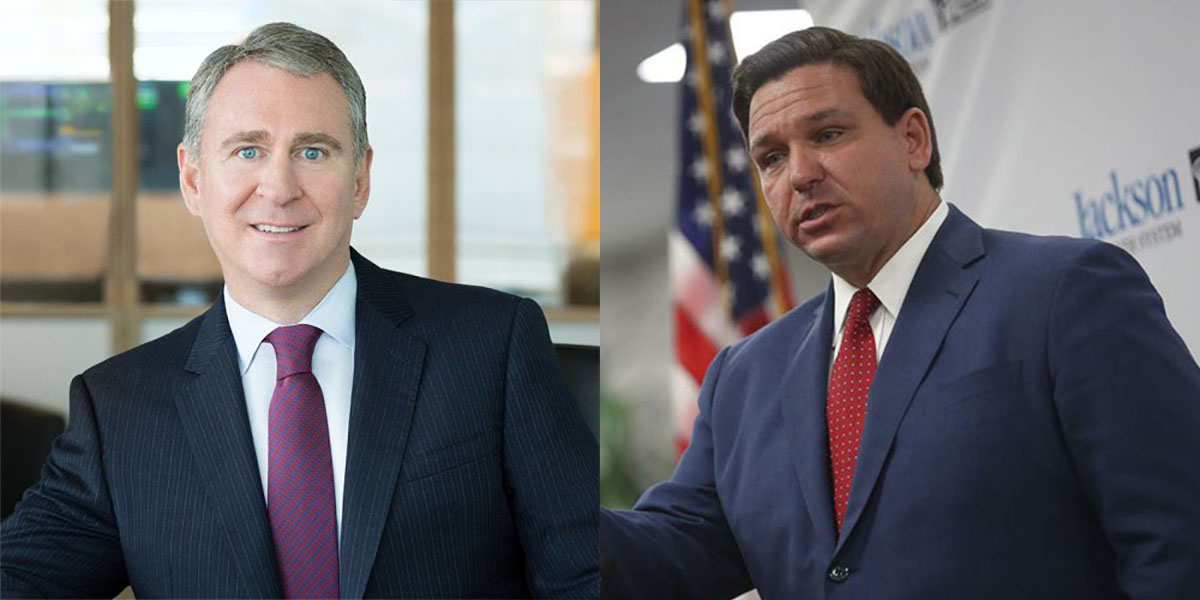 Ken Griffin has contributed more than $100 million to Republicans.

Chicago-based hedge fund billionaire Kenneth C. Griffin has long been a huge contributor to Republicans, and he stands this year as the biggest donor to Florida’s 2022 gubernatorial election.

It also appears to stand tied as the largest check an individual has ever cut to support any statewide candidate in Florida, not counting candidates who wrote seven- or eight-figure checks from their own wealth to support their own campaigns.

Griffin’s single $5 million check to DeSantis’ committee in April represents more campaign money than either of the Democrats, U.S. Rep. Charlie Crist or Agriculture Commission Nikki Fried, had been able to raise in total through the end of July. August reports will put Fried over that threshold with the combined funds for her campaign and her Florida Consumers First Committee.

Who is Kenneth Cordele Griffin?

— For starters, he’s a Florida Man, born in Daytona Beach and now with a significant presence in Palm Beach. However, his career, business empire headquarters, and official residence are all in Chicago.

— The Chicago Tribune reported in 2019 that Griffin was the richest man in Illinois.

— Sometimes, he’s one of the richest men in Florida.

— Foundation Guide says his Kenneth C. Griffin Charitable Fund has donated hundreds of millions of dollars to arts and education causes, particularly around Chicago, but also including $150 million to his alma mater, Harvard University. His main companies, Citadel and Citadel Securities, also donated tens of millions of dollars.

— He and Citadel got publicly implicated as being at least partly behind the bizarre GameStop stock activity last winter that briefly turned the struggling chain of video game stores into one of the hottest properties in the world for a few days. The U.S. House Committee on Financial Services grilled Griffin on that in February. He repeatedly flustered Democrats questioning him in that hearing, and they made nothing stick.

— He has been a generous political donor for at least 20 years, contributing overwhelmingly to Republican candidates and organizations, but occasionally to Democrats, including Sen. Bill Nelson in 2004 and Barack Obama in 2008.

A search of FEC records found no direct donations from Griffin to former President Donald Trump‘s campaigns or major committees.

DeSantis is not his biggest single candidate benefactor. The Chicago Tribune reported that Griffin donated $36 million to the campaign efforts of Bruce Rauner, who was elected Illinois Governor in 2014 and served one term.

Griffin also has been generous to Scott and Rubio. He chaired Scott’s New Republican PAC in 2018 and donated $10 million to it. He also donated $266,000 to Scott’s Rick Scott Victory Fund and a maximum contribution of $5,800 to Scott’s official U.S. Senate campaign that year. This year, Griffin sent $5,000 to Scott’s Let’s Get to Work PAC.

In 2015 and ’16, Griffin sent a total of $2.6 million to Conservative Solutions PAC, which supported Rubio’s 2016 presidential campaign. He also gave maximum donations toward Rubio’s 2010 and ’16 U.S. Senate campaigns.

He has contributed to the congressional campaigns of DeSantis and those of Republicans David Jolly, Brian Mast, Maria Elvira Salazar, and Michael Waltz.