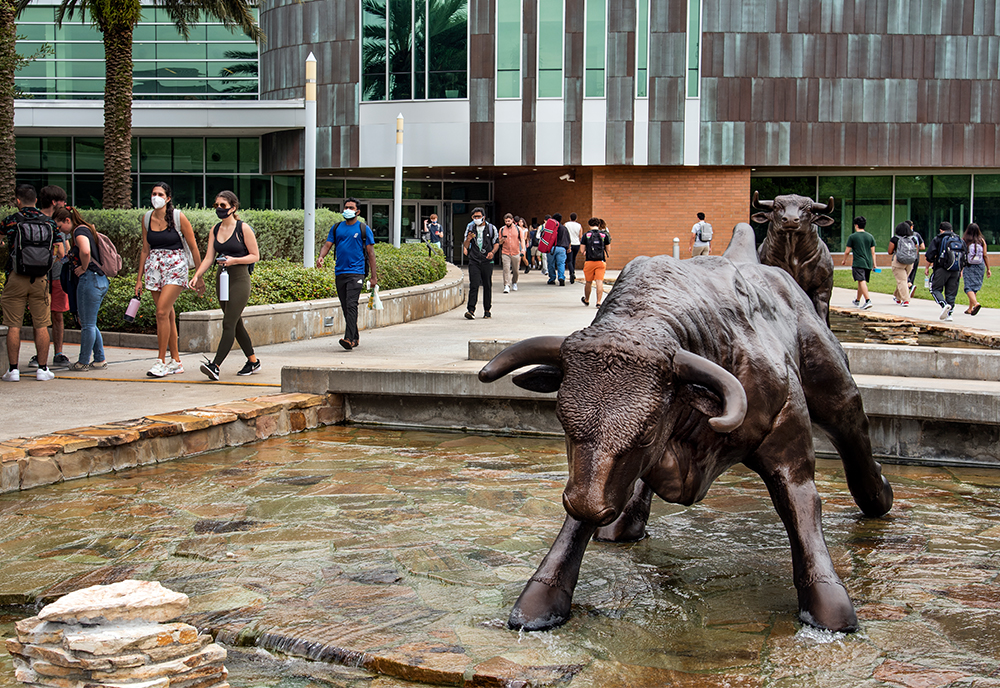 USF is also on the hunt for a new president, with Rhea Law serving as the school's interim leader.

The University of South Florida is welcoming the school’s largest, most academically accomplished and diverse freshmen class in the institution’s history.

The university’s class of 2025 is made up of 6,392 students, including 763 freshmen who are attending the USF St. Petersburg campus, a jump of 83% from 418 students last year. The full class also includes record increases of out-of-state and international students, with first-year students coming from 52 counties in Florida, 44 states and 86 countries.

“The University of South Florida is proud of the size, quality and diversity of our first-year students,” USF interim President Rhea Law said in a statement. “It shows that more and more students are able to benefit from USF’s outstanding commitment to supporting our students as they pursue their academic and career goals.”

As for academics, the average high school GPA for first-year USF students in the fall intake is 4.18, with an average SAT score of 1297 out of 1600. The class includes a record 62 new National Merit Scholars, up from a previous record of 35 in 2020. And, for the first time, five National Merit Scholars will call the USF St. Pete campus their home.

USF has also seen significant growth in the Judy Genshaft Honors College, which stretches across all three campuses. The Honors College saw an 8% growth in enrollment, as well as increases in average GPA and test scores, placing them in the top 3% in the nation.

The university also reported improvements in student diversity, a result of several strategic steps taken by the school to increase the number of students of color, according to USF.

As a result, the universitywide incoming class is the most diverse to date, with an increase of 16% in Black students, 3% in Hispanic students, 14% in Asian students, and 17% more students who self-identify as two races or more, compared to last year.

The USF St. Pete campus has also seen significant growth in diversity from the previous year, which includes an increase of 172 students of color.

USF’s demographic profile distinguishes it as more diverse than the other two preeminent universities in Florida and most institutions in the Association of American Universities. The university has earned national recognition as a leader in student success, including graduating underrepresented minority and limited-income students at rates equal to or higher than White and higher-income students.

“Despite the challenges of the past year, I am pleased that USF continues to be a preferred destination for the most academically talented students from across the Tampa Bay region, the state of Florida, the nation and from around the globe,” USF Provost and Executive Vice President Ralph C. Wilcox said in a statement. “Our student population is representative of the communities we serve.”

The demand for student housing has increased with new and returning students, resulting in residence halls at near full capacity. New and returning students are also taking advantage of courses offered across all three campuses that have led to an increase in student credit hours at both the USF Sarasota-Manatee and USF St. Petersburg campuses.

USF Health’s Morsani College of Medicine also welcomed its most competitive and diverse group of students in the college’s history with a median MCAT score of 517, placing the 2021 class in the 94th percentile. Groups traditionally underrepresented in medicine are 20% of this year’s incoming class.

The university’s total current enrollment stands around 50,000. USF is also on the hunt for a new president, with Law serving as the school’s interim leader since former President Steven Currall’s retirement.