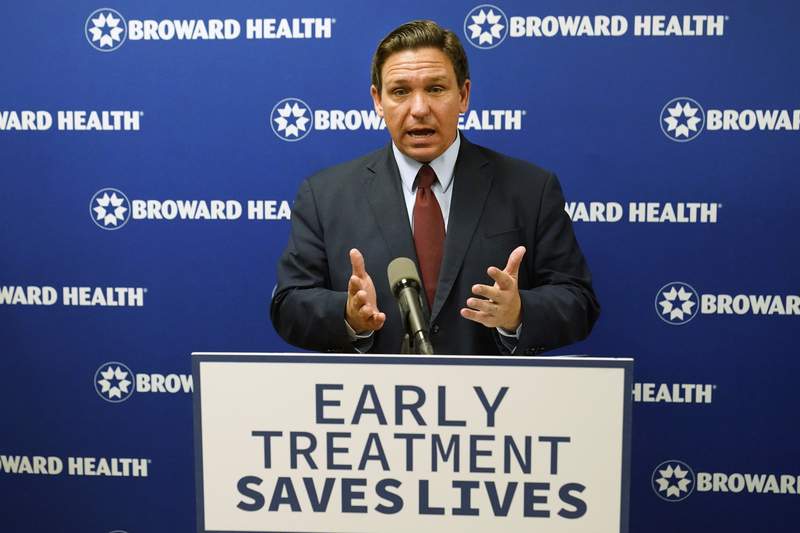 The report doesn't single out Florida, but the administration says it validates the state's response anyway.

Vaccinations reduced COVID-19 infections by 265,000 cases, 107,000 hospitalizations and 39,000 deaths among Medicare beneficiaries between January and May 2021, according to a report the U.S. Department of Health and Human Services released Tuesday.

In late 2020, the U.S. Centers for Disease Control and Prevention advised that states make people 75 and older, as well as essential workers, eligible for the vaccine. However, DeSantis broke ranks with the federal government, instead clearing those 65 and older and leaving out essential workers until their age cohorts became available.

“Efforts to prioritize and vaccinate this group directly correlate to saving lives,” HHS said in a press release, referring to those 65 and older.

“When I decided to put Seniors First, the data clearly showed that prioritizing vaccines for seniors would save the most lives,” DeSantis said. “It was the right thing to do, and I am glad to see the federal government has continued to acknowledge this reality.”

While the DeSantis administration claims the report validates Florida’s response, it never singles out Florida’s response. However, among the 20 most populous states, Florida ranked sixth in vaccinating its 65 and older population.

Beginning in August, DeSantis toured the state to raise awareness for monoclonal antibody treatments. While he referred to the COVID-19 drug as “another tool in the toolbox” alongside vaccines, shots came secondary in his messaging.

The Governor has defended his recent choice to focus on monoclonal antibodies by saying the public is fully aware of vaccines but not the antibody treatment. Still, federal data shows Florida lagging behind the national average.

Nationwide, nearly 80% of deaths were among Medicare-eligible people 65 and older before vaccines became available. Between January and May, when vaccination grew to 47% among adults 18 to 64 and 80% among those 65 and older, the study found an 11% to 12% decrease in weekly COVID-19 hospitalizations and deaths among Medicare beneficiaries for every 10% increase in county vaccination rates.

“This report reaffirms what we hear routinely from states: COVID-19 vaccines save lives, prevent hospitalizations, and reduce infection,” HHS Secretary Xavier Becerra said. “The Biden-Harris administration has prioritized getting vaccines quickly to pharmacies, nursing homes, doctors’ offices and even provided increased reimbursement rates for at-home COVID-19 vaccinations so that seniors and others can easily get vaccinated.”

previousJoe Henderson: Gov. DeSantis needs to come down hard on the GOP's fringe

nextLast Call for 10.6.21 — A prime-time read of what’s going down in Florida politics