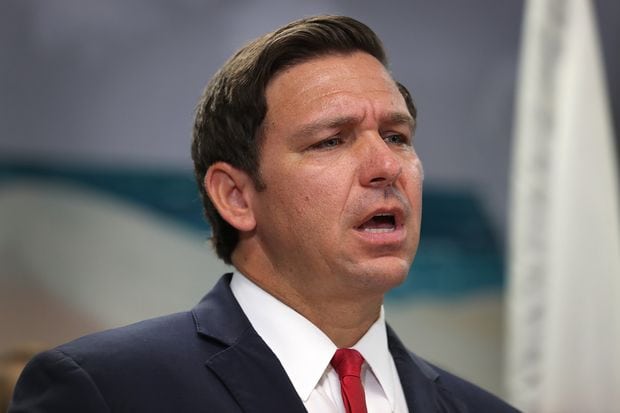 'It's for officers period. It has nothing to do with their vaccination status.'

He wants officers who are disgruntled for a variety of reasons, he said, including an inability to “take that environment” in places like New York, Seattle, and Minneapolis, flash points in last year’s street protests in the wake of the George Floyd murder.

“We are 100% excited about saying that anyone that’s being mistreated, if the morale is low, if you can’t take that environment, and we have openings here, you’re going to get an environment where people are going to support you,” DeSantis said.

DeSantis elaborated on his proposal to pay police officers from other states $5,000 to come to Florida, first rolled out in September.

Contrary to reporting in recent days, he stressed he wasn’t just recruiting cops who refused COVID-19 vaccinations as conditions of employment.

“No, no, no, no,” DeSantis said to a reporter Monday. “It’s for officers period. It has nothing to do with their vaccination status. That’s just wrong. I think there was a headline from a corporate outlet. We all know corporate media lies, OK. They do not tell the truth. Assume what they tell you is false and then figure out why they are telling you a false narrative.”

The source of that “false narrative” is from a friendly interview the Governor did on Sunday, offering the latest example of how even soundbites only intended to be consumed by his political base come back to haunt DeSantis.

The Governor appeared on the Fox News Channel Sunday, promoting the $5,000 bonus scheme. Context suggested that unvaxxed cops were part of the recruitment strategy.

The question from host Maria Bartiromo was framed around vaccine mandates for police and military members, with Bartiromo asking about Chicago cops walking off the job setting up the answer, suggesting to the Washington Post and others that DeSantis ultimately draws a connection between the bonuses and unvaccinated cops. DeSantis has referred to vaccinations as “injections” at various times, meanwhile, further muddling the narrative.

During remarks Monday in Venice, DeSantis noted his administration had hosted vaccination events for first responders earlier this year, further distancing himself from the idea that unvaccinated police officers are the recruitment targets. Rather, the Governor wants cops who feel “mistreated” and who have found constraints in other jurisdictions to be intolerable.

“I put that out there as a proposal months ago and the reason we’re doing it is because people are being treated poorly in Seattle, in Minnesota, in the NYPD. They don’t have support,” DeSantis lamented Monday. “They get criticized if they enforce the law.”

DeSantis added that in San Francisco, where he went this weekend for a fundraising trip, the law isn’t enforced at all and, “you have rampant crime” such as shoplifting

“That’s why we’re doing it. Because morale is low. Morale’s been low for years because of how law enforcement’s been treated. But when you saw all the rioting happening last summer, all the vitriol directed at them, Florida stood up and said we back the blue.”

“We’re looking to capitalize on a lot of communities around the country who have turned their back on law enforcement,” DeSantis added.

The Governor said those who have moved down already say “it’s the best decision they’ve ever made.”

Indeed, DeSantis has been recruiting cops from elsewhere since this summer, road testing tough rhetoric by way of welcoming prospective police officers.

“I do think you will see; I think you’ve already seen. But there are people in these police departments in various other parts of the country who, if they can get a job in Florida, they want to come to Florida to be able to do it,” DeSantis said in Green Cove Springs in July. “Because the culture is better, and they understand they’re going to be supported much more resolutely than what they do.”