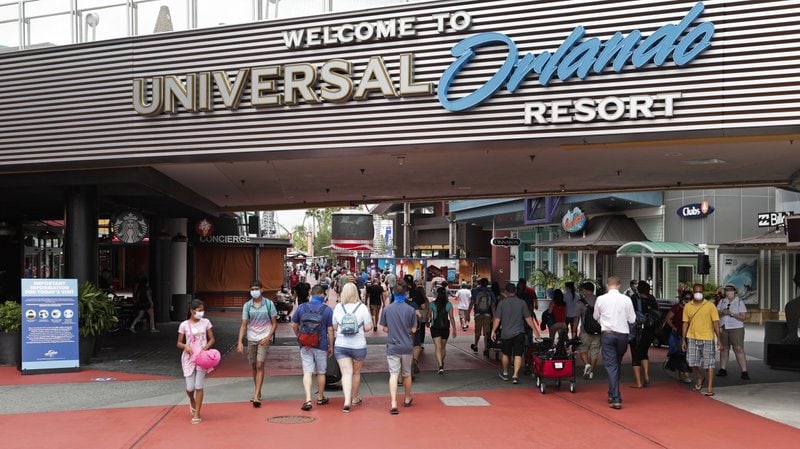 “I think there was a large group of people who are like, ‘I'm ready to go.'"

Tourism experts are surprised by how fast Orlando’s theme parks are rebounding from the pandemic’s economic crisis as Universal parks posted another strong financial quarter Thursday.

“I would like to highlight our theme parks, especially Orlando, which just reported the most profitable quarter in its history despite having virtually no international guests due to COVID-related travel restraints,” Comcast CEO Brian Roberts told investors during a Thursday morning call after the company released its third-quarter earnings.

University of Central Florida assistant professor Carissa Baker, who follows theme parks, said she had expected the parks’ attendance and revenues to rebound by 2022 or 2023.

“I am actually pretty impressed by the numbers,” Baker said after Universal’s latest finances were made public. “I’m not sure anybody would have expected (the rebound) would happen this quickly.”

Overall, Universal theme parks generated $1.4 billion in revenue this quarter — more than three times what the parks performed during the same time period a year ago.

It’s a very different outlook from October 2020 when the company’s theme park revenues plummeted faster than a roller coaster since back then, Orlando and Japan’s parks were still only open at limited capacity and the California park was completely closed.

Fast forward to now: Universal Orlando’s Halloween Horror Nights has drawn crowds and thrill-seekers are checking out Orlando’s new Jurassic World-themed coaster at parks that are at full capacity again. And the company recently opened a new park in China this fall.

Universal is also building a third park in Orlando called Epic Universe although Comcast executives didn’t give any new details during Thursday’s earning call as fans wait for the official opening date or the official confirmation what new rides or lands will be built.

Attendance seems poised to keep increasing since foreign travelers are expected to be back soon. The United States is lifting COVID-19 airline travel restrictions this fall so Europeans and other tourists can enter the country.

“Overall, on parks, we are encouraged by the continued recovery, but getting back to and then exceeding pre-pandemic levels of EBITDA will likely require an improvement in international visitation,” Comcast CFO Mike Cavanaugh said on Thursday’s call, speaking about earnings before interest, taxes, depreciation, and amortization.

Universal’s Orlando competitors, The Walt Disney Co. and SeaWorld Entertainment, are scheduled to release their latest quarterly earnings in November.

Baker said she is awaiting the other companies’ financial figures to see if the continuing economic rebound is a theme park industrywide trend or is limited to Universal.

What’s clear is all of Orlando’s parks are drawing big crowds.

On Oct. 1, Disney World celebrated the launch of its 18-month celebration for its 50th anniversary while SeaWorld is running its first-ever spooky haunted house event this year.

Baker has visited the Big Three — Disney, Universal and SeaWorld — and noticed the crowds in full force in October.

Perhaps people are returning now after waiting to get fully vaccinated or for Orange County’s virus infection rates to finally dip after this summer’s surge, said Baker, who teaches at UCF’s Rosen College of Hospitality Management.

“I think there was a large group of people who are like, ‘I’m ready to go,’” Baker said.

nextSunburn — The morning read of what’s hot in Florida politics — 11.3.21