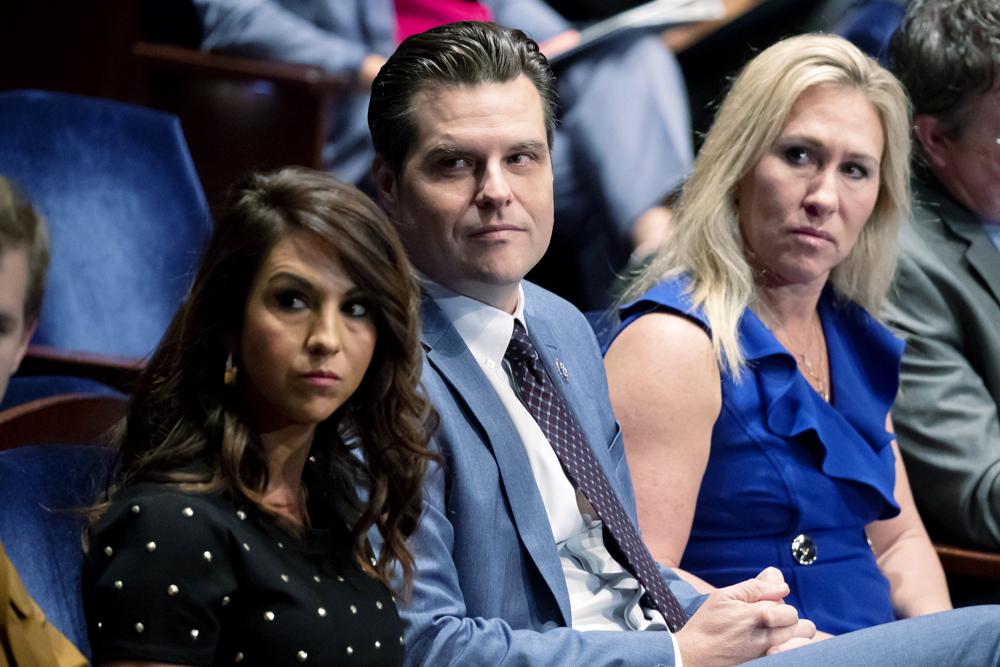 House Minority Leader Kevin McCarthy appears to have settled on a strategy to deal with a handful of Republican lawmakers who have stirred outrage with violent, racist and sometimes Islamophobic comments.

If you can’t police them, promote them.

The path to power for Republicans in Congress is now rooted in the capacity to generate outrage. The alarming language, and the fundraising haul it increasingly produces, is another example of how Donald Trump, the former President, has left his mark on politics, changing the way Republicans rise to influence and authority.

Success in Congress, once measured by bills passed and constituents reached, is now gauged in many ways by the ability to attract attention, even if it is negative as the GOP looks to reclaim a House majority next year by firing up Trump’s most ardent supporters.

That has helped elevate a group of far-right lawmakers — including Reps. Lauren Boebert of Colorado, Marjorie Taylor Greene of Georgia and Paul Gosar of Arizona — whose inflammatory comments once would have made them pariahs.

Rather than face punishment for personal attacks that violate longstanding norms of Congress, they’ve been celebrated by conservatives, who have showered Boebert and Greene with campaign cash.

“We are not the fringe. We are the base of the party,” Greene, who has previously endorsed calls to assassinate prominent Democrats, said last week on a podcast hosted by former Trump adviser Steve Bannon.

The hands-off approach by Republican leadership gives them license to spread hate speech, conspiracy theories and misinformation that can have real world consequences, while testing the resolve of Democrats, who already removed Gosar and Greene from their committees.

It’s also a different tack from the one McCarthy took in 2019 when he stripped then-Rep. Steve King of Iowa of his committee assignments for lamenting that white supremacy and white nationalism had become offensive terms.

In two videos that surfaced recently she likened Rep. Ilhan Omar, a Minnesota Democrat who is one of three Muslims in Congress, to a terrorist concealing a bomb in a backpack. Boebert has also repeatedly referred to Omar as belonging to a “jihad squad,” as well as “black-hearted” and “evil.”

Her comments drew widespread condemnation and led to calls for Boebert to become the third GOP lawmaker this year to be removed from congressional committees. But instead of publicly apologizing to Omar, a defiant Boebert insisted that Omar should be the one to issue a public apology “to the American people” for her “anti-American” rhetoric, as well as past “anti-Semitic” comments, which Democrats condemned at the time.

In the uproar that followed, Omar received death threats, including a voicemail left by a man who called her a “traitor” and suggested she would be soon be taken “off the face of the (expletive) earth.”

“We cannot pretend this hate speech from leading politicians doesn’t have real consequences,” Omar said Tuesday while calling on the Republican Party to “actually do something to confront anti-Muslim hatred in its ranks.”

Boebert, meanwhile, burnished her image through an appearance on Fox News where she blamed Democrats who “want to cancel me” for the controversy. She has raked in $2.7 million so far this year, making her one of the top Republican fundraisers, according to campaign finance disclosures.

McCarthy, who is in line to become speaker if Republicans retake the majority in the 2022 midterm elections, downplayed the controversy Friday. He credited Boebert for attempting to privately apologize in a phone call with Omar, while breezing past Boebert’s refusal to do so publicly.

Rep. Matt Gaetz, a Panhandle Republican, has also continued strong fundaising despite a looming federal investigaion and sex scandal. In the election cycle to date, he has pulled in an impressive $4.26 million in contributions from people across the country.

But McCarthy has also indicated that there will be little consequence for personal attacks. Just last month he said those punished by Democrats could be in line for a promotion if he becomes speaker, floating the possibility that Gosar and Greene “may have better committee assignments” than before.

That also poses a vexing issue for Democrats. During a Wednesday caucus meeting House Speaker Nancy Pelosi condemned Boebert’s behavior, but cautioned that restraint was needed.

“This is hard because these people are doing it for the publicity,” Pelosi said, according to a person in the room, who insisted on anonymity to discuss private deliberations. “There’s a judgment that has to be made about how we contribute to their fundraising and their publicity on how obnoxious and disgusting they can be.”

In many cases, the incentive to outrage can outweigh the consequences.

Greene arrived in Congress this year with a well documented history of making inflammatory comments. A former adherent of the QAnon conspiracy theories, she once mused that a wealthy Jewish family may have used space lasers to spark California wildfires.

She’s also harassed survivors of school shootings, accused Pelosi of committing crimes punishable by death and appeared in a 2019 video at the Capitol in which she argued Omar and another Muslim representative weren’t “really official” members of Congress because they didn’t take the oath of office on the Bible.

Since her election she’s used her nonstop attacks and viral online moments to reap a $6.3 million fundraising windfall — more than three times the cost of the average congressional campaign — while proving to be a speaking draw at Republican fundraisers around the country.

“If you say something bats—— crazy, if you say something extreme, you are going to raise money,” said Rep. Nancy Mace, a South Carolina Republican who is one of the few Republicans to publicly criticize the rhetoric of her colleagues. Mace, who publicly feuded with Greene last week, said the Georgia lawmaker was a “grifter of the first order” who takes advantage of “vulnerable conservatives.”

Gosar, who was censured last month after posting an animated video of himself killing Democratic Rep. Alexandria Ocasio-Cortez of New York, is nowhere near as prolific of a fundraiser. But he has become a celebrated figure for white nationalists and has made appearances at fringe right-wing events, including a gathering in Florida last February hosted by Nick Fuentes, an internet personality who has promoted white supremacist beliefs.

Still, some Republicans say just because the three have achieved a measure of fame doesn’t mean they have accumulated real influence or staying power.

“There’s always some gifted communicator who comes in,” said Rep. Tom Cole, a 10-term Oklahoma Republican, who used the GOP class of 1994, when Republicans took over the House for the first time in decades, as an example. “We’re a long way of knowing how long they’ll stay. A lot of the brightest stars of the 1994 class were gone within eight years.”

Besides he added: “The reality is the first six years, the only thing you are going to do is what they let you.”