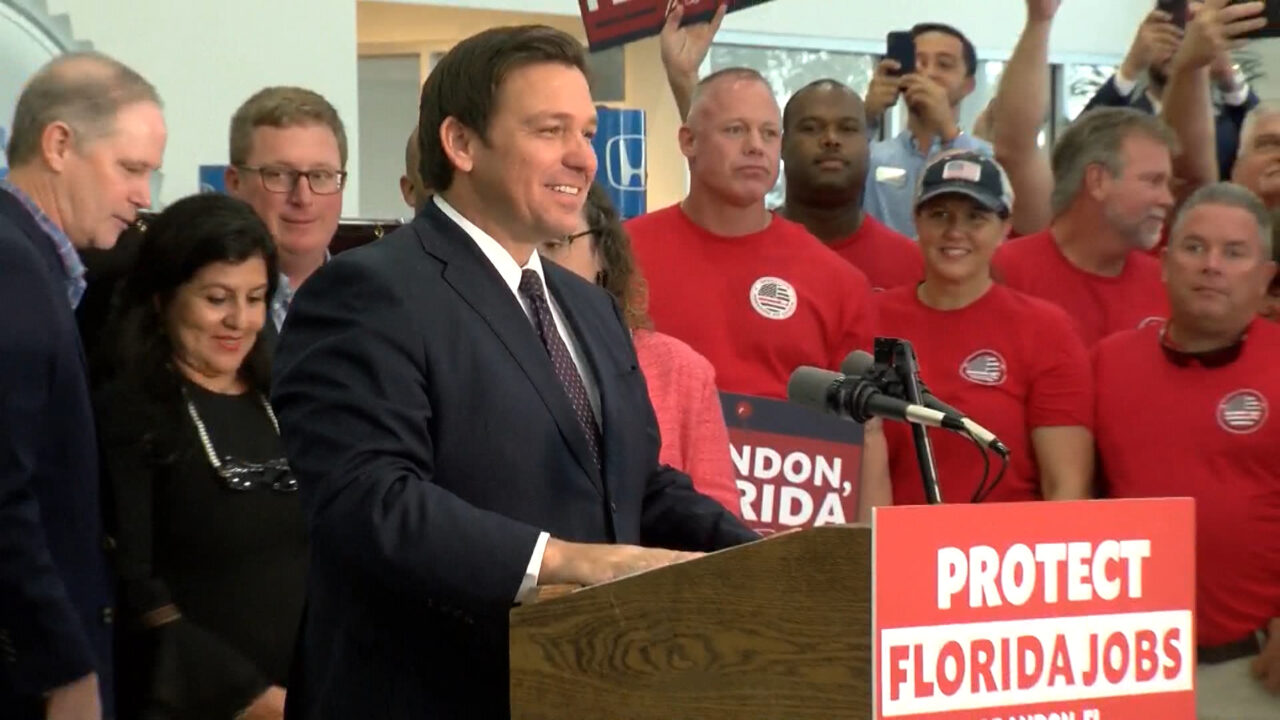 Is NASCAR fronting for the Joe Biden 'regime?'

Gov. Ron DeSantis on Thursday waded into yet another controversy regarding the NASCAR driver who first elicited the infamous “Let’s Go Brandon” chant.

NASCAR rejected the attempt by cryptocurrency coin LGBCoins.io to sponsor the car of driver Brandon Brown. LGB is shorthand for “Let’s Go Brandon,” which is a phrase opponents of the President have adopted to mean “F*** Joe Biden.”

A NASCAR source told CBS that Brown and the company both knew the sponsorship and its “derogatory and vulgar euphemism” would be rejected weeks ago. But DeSantis framed the rejected sponsorship as a reflection of language “sanitized” in the service of the current President.

“I’m very much in favor of letting people speak their mind however they want to do it,” explained DeSantis, who just days ago delayed a press conference to have activist Ben Frazier arrested after Frazier tried to question the Governor and refused to leave.

“I don’t think there’s anything wrong with LGBCoin,” DeSantis added. “First of all, it wasn’t Brandon’s fault that any of this happened. If you remember what happened, he was being interviewed at a NASCAR race. There were fans in the crowd who were chanting very colorful language about Biden.”

“It was obvious that’s what was happening,” DeSantis added. “Then the reporter, and I don’t know why, ran interference on that and said they’re chanting ‘Let’s Go Brandon,’ isn’t that great. That’s why it took off, because people are looking at it and saying, ‘You’re gaslighting us again, and we’re sick of it.'”

“It’s as much a rebuke to some of the corporate media out there as it is to Biden himself,” DeSantis continued, saying that while people could “say whatever” about Donald Trump, language is “sanitized” for the benefit of the current “regime.”

“I don’t think that’s the way we want to go,” DeSantis counseled.

The Governor has embraced the “Let’s Go Brandon” cultural moment for months now.

“You look at the Biden, the Brandon administration,” DeSantis said at a November event, catalyzing a “Let’s Go Brandon” chant in the hall.

“Let me ask you how he’s treated us,” he said later in November. “Look, I think it’s a joke. But, honestly, one of the reasons that has taken on is because a lot of your folks in the national media, they get very sensitive to it.”

“I think the reason it’s caught on is because it needles the national media a little bit. Look, they’ve become very partisan,” DeSantis added. “So I think we view it as fun.”

DeSantis would go on to sign legislation banning vaccine mandates at Brandon Honda, which is not in the city of Brandon itself. Ownership made “zero connection” between the location and the coded vulgarity of the LGB chant, according to the Automotive News website.

next'This is their Christmas': Gov. DeSantis jabs at news media on Jan. 6 anniversary