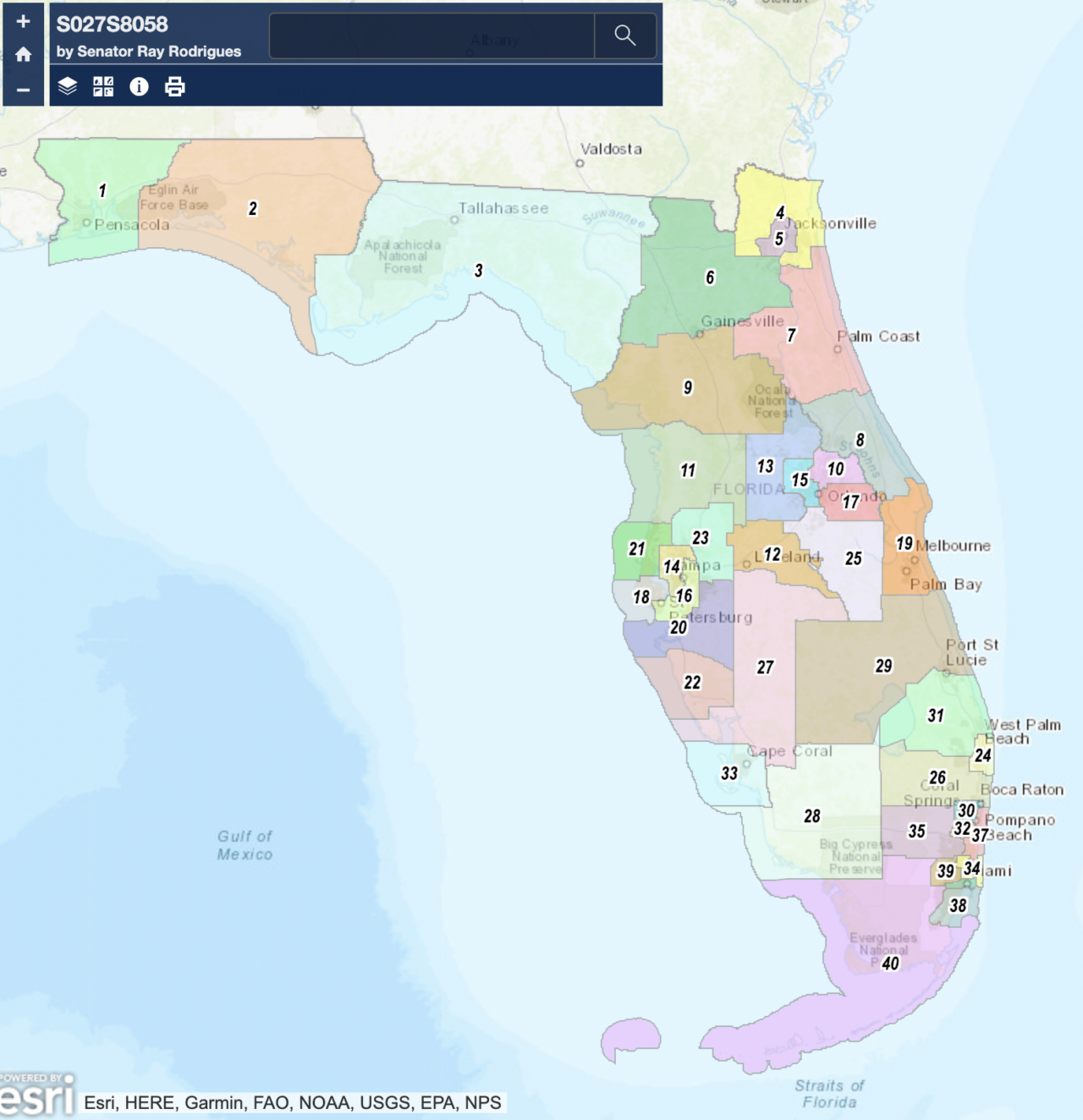 The full Senate could vote on the map next week.

A proposed Senate map (S 8058) advanced from committee on Thursday. Now, the cartography that will dictate the chamber’s future potentially for a decade could land on the Senate floor as soon as next week.

The Senate Reapportionment Committee voted up on legislation generated over months. At the meeting, senators approved an amendment from Sen. Ray Rodrigues, the Estero Republican chairing the committee, that ensures fewer cities end up in split districts. That included making whole Laurel Hill, Holly Hill, Titusville, Winter Haven and Pembroke Pines, all cities that originally had portions pushed into adjacent districts in a staff produced map (S 8046).

That means the committee actually approved a map submitted by Rodrigues.

“The result is a map that would yield only 22 cities in which the entire population is not contained in one district, outside of Tier 1 requirements,” Rodrigues said. The Tier 1 requirements require minority access districts not to diminish in the redistricting process.

The Senate also held a card-drawing procedure to determine which proposed districts end up with even or odd numbers, a matter of political consequences that had to be determined randomly per court edict.

Of note, the subcommittee rejected another amendment, this one from Sen. Audrey Gibson. The Jacksonville Senator expressed concern that Senate District 5, analogous to the Senate District 6 she now represents, doesn’t best serve many constituents in the Jacksonville area. She favored a prior proposal where the borders of the district nestled into the borders of the proposed Florida’s 5th Congressional District as it appears on a congressional map (S 8040) advanced by the committee earlier in the day.

She said the duck-shaped district that made it on the final Senate draft map lacked the economic development opportunities that would come in extending to the west. The district as proposed by Gibson included First Coast and Cecil.

“I’m making the point that the district can be constitutional, and (we can) still make sure that there’s grocery stores and things like that within the district,” she said.

From here, the Senate will take the map to the floor next week, and then wait for the House to finish its process, one proving more lengthy as House staff draws a legislative map with 120 districts as opposed to the Senate’s 40.

The districts would place Senate Democratic Leader Lauren Book in the same district as Rosalind Osgood, who won a primary on Tuesday to represent the existing Senate District 33 after Sen. Perry Thurston’s resignation to run for Congress. Book and Osgood both live in the proposed Senate District 32.

And Republican Sens. Dennis Baxley of Ocala and Keith Perry of Gainesville end up in the same district.

As for partisan performance, an analysis of the lines by MCI Maps run by Democratic consultant Matt Isbell looked at how voters in proposed districts performed in the 2020 presidential election. On the proposed map, 23 districts favored Republican Donald Trump and 17 favored Democrat Joe Biden. The current Senate make-up includes 24 Republicans and 15 Democrats, with one seat vacant in a Democrat-leaning district.