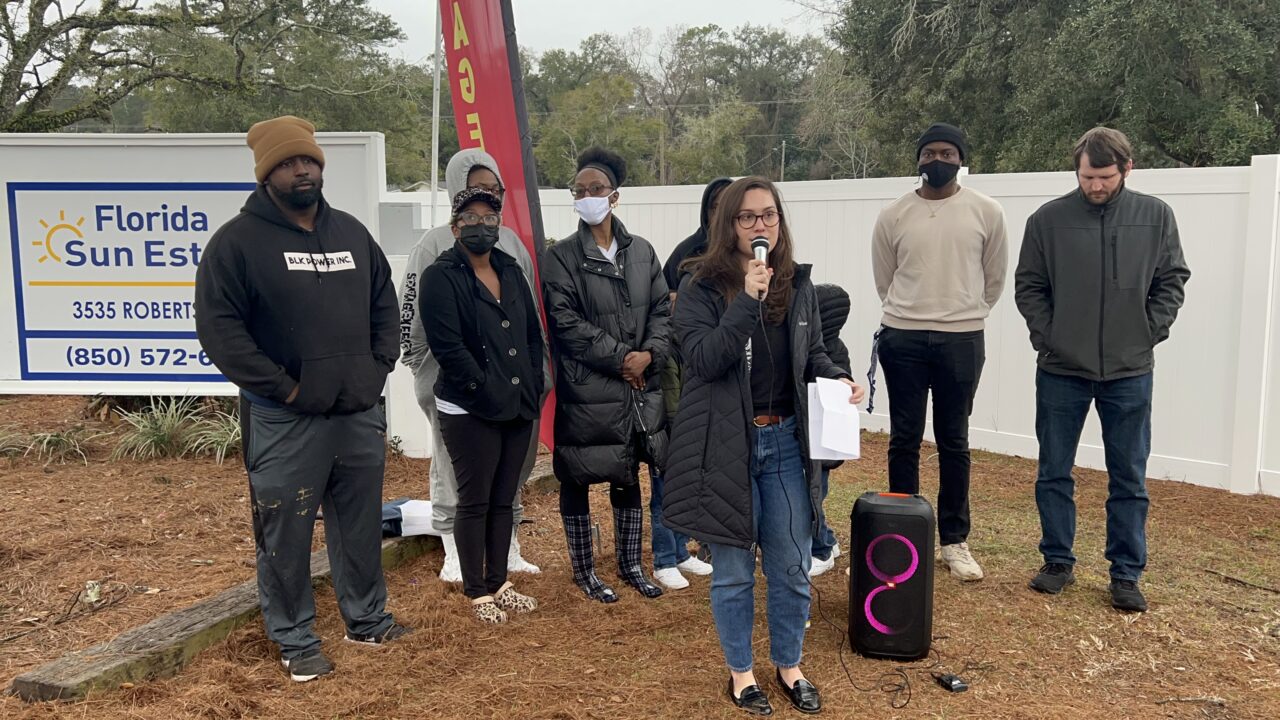 The owner of Florida Sun Estates has doubled rent, blocked off a safe path for school children and refused to answer contact requests from elected officials.

Local and state officials from Tallahassee are criticizing the actions of the new owner of a mobile home park in the city.

Tallahassee City Commissioners Jeremy Matlow and Jack Porter and Leon County School Board Chair Darryl Jones held a news conference Tuesday outside Florida Sun Estates criticizing the rent increases, the failure of the owner to answer the residents and their contact requests, and other actions. Tallahassee Rep. Allison Tant has also spoken out against the owner’s actions.

Florida Sun Estates, previously known as the Meadows, was purchased in August by Florida Sun Estates LLC. The company was created by an Orlando insurance agent named Derek Vickers, according to the Tallahassee Democrat. Since then, rent for tenants has doubled and communication with tenants and elected officials has been sparse or nonexistent. Some of the park’s residents have month-to-month leases, causing them to worry about where they will find housing at the end of the month.

Additionally, a gate that used to provide a safe pathway for students of Sabal Palm Elementary that lived on the property was blocked off by the owners, forcing the children to walk along a busy road to get home.

Tant told Florida Politics several school volunteers have offered to staff the gate for one hour before school and one hour after school, but the property owner has denied those requests. She said she has made numerous attempts to contact the property owner about opening the gate to allow students through but has not received a response.

During one call to the property’s management office, she was told that they “don’t talk to you people.”

“This is the disdain they show for this community,” Tant said. “With what these people are paying, they deserve better.”

Before the start of the press conference, security from the property forced the residents, media and elected officials in attendance at the edge of the property to stand on the sidewalk.

In conversation with Matlow, the security officer said the property management did not want news media on the property, according to the Tallahassee Democrat.

“They (the residents) are allowed to invite guests, but the media are not allowed because you guys are actually doing something that’s against what … property ownership wants,” the security officer said.

Matlow took exception to that in his remarks.

“Florida Sun Estates wants to ask the press, the children and the residents in attendance today to get closer to dangerous traffic. They refuse to answer phone calls from elected officials or take any type of meaningful effort to communicate with these residents,” Matlow said. “They know we’re out here right now. And the message that they’re sending is to get in the roadway because we do not care.”

Matlow questioned the owner’s motives for buying the property.

“Let me be clear, they bought this property not as an investment. It is not investing to buy a property and double the rent. That is predatory behavior,” he said.

Porter said there is nothing the city can do to stop the actions of the property owner, but that is not going to stop her from advocating for Florida Sun Estates residents.

“We are here instead to appeal to Florida Sun Estates to communicate with these residents and deal with them in good faith, who we are sworn to represent and protect,” Porter said. “To all management companies and investors at large that come to Tallahassee, let it be clear that we expect you to treat our community with respect and dignity.”

Porter said she is setting up a mutual aid fund for residents of the property. She said people interested in donating can contact her office at 850-891-8191.

nextRon DeSantis moves to cash in on monoclonal cutoff