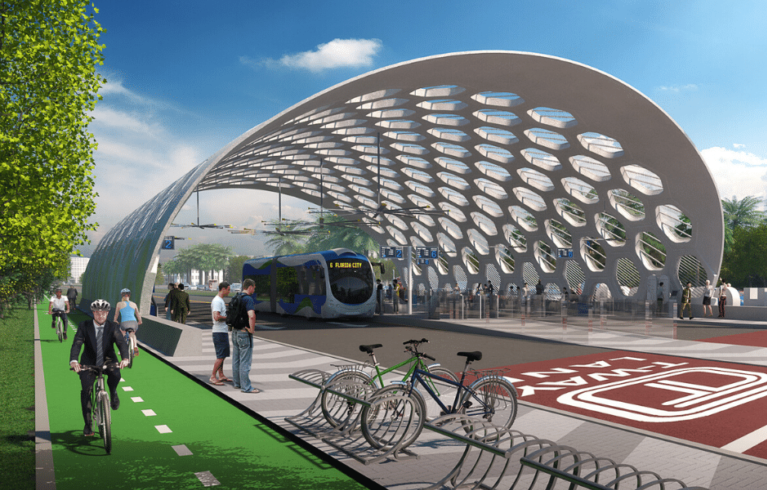 The trail runs parallel to the South Dade Transitway, which is undergoing a $368 million redevelopment to accommodate rapid bus.

Florida lawmakers will provide Miami-Dade with a $3 million funding match to upgrade a transit-adjacent trail spanning several municipalities in the county’s southern region.

As part of the Legislature’s end-of-Session budgeting, the Senate and House agreed to provide the one-time funding, which Miami-Dade will equal for a $6 million project budget.

Republican Rep. Anthony Rodriguez, who is running for the Miami-Dade Commission this year, filed an appropriations request for the funds in late October on behalf of the county Department of Transportation and Public Works.

According to a project request form DTPW Director Eulois Cleckley filed through Rodriguez’s office, the funds will finance plans and designs for improvements to the trail.

The trail runs parallel to the South Dade Transitway, a linear, 20-mile busway between the southernmost Metrorail station near Dadeland Mall in the county’s unincorporated Kendall neighborhood and the town of Homestead bordering Monroe County.

Both the busway and trail run parallel to U.S. 1, the county’s central thoroughfare, for most of that distance.

In June 2021, Miami-Dade broke ground on a $368 million project to redevelop the route so it can accommodate “gold standard” bus rapid transit (BRT), which is expected to provide Metrorail-like transit services with stops in Pinecrest, Palmetto Bay, Cutler Bay and Homestead.

Prior to its approval Aug. 30, 2018, by a local transportation planning board whose members include the entire County Commission, U.S. Rep. Carlos Giménez — the Miami-Dade Mayor — said of the project: “For all intents and purposes, it’s rail on rubber tires.”

The busway, also known as the South Corridor, is part of the Strategic Miami Area Rapid Transit (SMART) Plan, an initiative commissioners devised in 2016 to advance studies of six major commuting corridors to attract state and federal redevelopment dollars.

The South Corridor was the first of the six to secure such funding — $100 million apiece from state and federal transportation departments to match $100 million in local funds.

Improvements to the South Dade Trail, the funding request said, are necessary for the South Corridor as they will aid in first- and last-mile connectivity, a component mobility experts found to be vital to transit adoption among those with other travel options.

On Oct. 5, the Miami-Dade Commission unanimously passed a resolution by Danielle Cohen Higgins urging the Legislature to appropriate funding to improve the South Dade Trail.

Among the improvements planned: “community and transit-oriented amenities such as pedestrian lighting, public art, bicycle facilities and other micro-mobility options, which would promote the community interest and welfare of the residents of Miami-Dade County.”

Because the trail links directly to the Dadeland South Metrorail station, that means it connects to another path known as The Underline, a 10-mile linear park and urban trail running below the railway leading all the way to the city of Miami.

Last year, the county received $3 million for the development of The Underline. It got the same amount this year.

The budget represents a consensus between the House and Senate for the state’s financial priorities. It is still subject to the Governor’s veto pen, however.

Last year Gov. Ron DeSantis was thought to have wielded a relatively light touch when he slashed $1.5 billion out of the $101 billion budget.