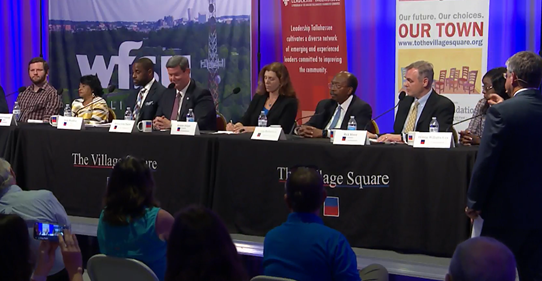 Commissioners who supported the stadium funding were confident in Blueprints community support. Those who opposed it had their doubts.

Nine Tallahassee and Leon County elected officials fielded questions ranging from the public’s trust in Blueprint and the civility between themselves during a Village Square Town Hall Monday.

The first notable moment of the night happened before the first question was even asked.

The event’s moderator, Skip Foster (the former publisher of the Tallahassee Democrat who now runs the firm Hammerhead Communications) disclosed at the beginning of the event that one of his clients is the Greater Tallahassee Chamber of Commerce. The Chamber and Matlow have publicly butted heads in the past, with the Chamber censuring him and featuring speakers at their retreats last year calling for them to get Matlow out of office after he wrote a column criticizing the Chamber.

After the disclosure, Matlow asked Foster how his conflict would be navigated and whether questions would be slanted.

Foster said he foresaw the concern, which is why he disclosed it at the start of the meeting and ran his questions by Village Square staff.

“Sometimes my clients have different interests, and the client I have tonight has a very clear interest in that is a balanced, impartial, civil discussion of the issues,” he said.

One of the central issues the officials discussed was the public’s trust in the Blueprint Intergovernmental Agency, an independent agency that oversees infrastructure and economic development projects funded by the county’s extra one-cent sales tax and controlled by a board comprised of city and county commissioners.

The Blueprint board approved a $27 million allocation for repairs to Florida State University’s Doak Campbell stadium earlier this year after months of often contentious public criticism and debate.

Dailey, who supported the funding, said he believes Blueprint is working and helped encourage $850 million in private investment last year alone in Tallahassee.

Matlow, who opposed the funding, said he believes the stadium vote has severely damaged the public’s trust in Blueprint.

“If we don’t fix the problems at Blueprint, I’m afraid this tax might not be renewed when it comes back up,” he said. “Now Blueprint money is going to stadium improvements, and everybody’s looking to their left, looking to their right and are like ‘what’s going on at Blueprint?”

“Regardless of where you stood on that project, if you voted against those other projects, you voted against development, I believe, in other parts of our community that need it desperately,” he said. “If we do what we did before, show the community that those projects will be completed — that they will be completed on time, and at least within budget — if it comes to the point where we need to go back to the community for that kind of assistance, I think we would have earned the confidence of this.”

Richardson’s position received firm pushback from Dozier, one of the commissioners advocating against the stadium funding. Currently, she is running against Dailey for Mayor. She pointed out she had tried to separate the bonding of the stadium from other projects, but was blocked by other members of the board.

“It is disingenuous to say that because those of us didn’t vote on a substitute motion that included Doak, we didn’t support any of those other projects. We all know that conversation was about Doak,” Dozier said. “Doak is the most anti-business, anti-jobs decision Leon County and Tallahassee has ever made.”

Maddox said it’s time to move on from the conversation on Doak, and transition it to how they can encourage FSU to get more involved in partnering with local communities after the allocation.

“What I want us to focus on right now is not the $27 million that went forward, because that has happened. What I want to focus on is pushing Florida State University to do even more than they’re already doing to account for the $27 million that was given,” Maddox said. “How can they become a better partner? How can I affect the bottom line of making our community better, more than they’re doing now?”

The commissioners also were asked about how they would improve civility with each other during government meetings.

The stadium funding issue escalated an already heated atmosphere among the local officials.

Text messages from local political operative and OurTallahassee writer Max Herrle and Commissioners Welch and Dozier criticizing other officials who supported the funding uncovered by the Tallahassee Democrat prompted an op-ed call out from Maddox. Dozier and Matlow also have been critical of actions during Blueprint meetings, like the sudden ending of the last meeting before Matlow could make a motion.

Welch apologized for his comments in the texts, and said commissioners including himself need to work hard to improve their decorum.

“We owe it to the constituents that we represent to uphold the highest standards of cordiality and collegiality and respect for one another,” Welch said.

Matlow said he believes the term uncivil has been thrown around too freely.

“I think things get labeled uncivil, just because somebody has an opposing opinion. And I think we have to move away from that and be able to engage opposing opinions and really deliberate about what they mean,” Matlow said.

Maddox said disagreements should be focused on the issues, not personality traits.

“We can agree to disagree, be statesmen about it, and move on. But when you get into the point where you start focusing on my personality, or things that are outside that issue, well, then it becomes personal,” Maddox said. “It should never be about us as individuals, it should be about how we move things forward in our communities.”

Dozier referenced the substitute motion used to block her motion to separate the bonding issues in her comments on civility.

“I think we have stumbled into using Robert’s Rules of Order or other tools as almost a weapon against those that we disagree with or against questions that we disagree with, or conversations that may go on too long,” she said. “If the rules that we put in place are too restrictive, and they don’t allow a free flow of dialogue, we need to look at that.”

Cummings said moving toward civility is necessary to deal with the pressing issues the city and county face, and to repair public trust after the public corruption trials centered on former City Commissioner Scott Maddox.

“I believe what we have to do is move forward and look forward, not in the past, and make sure that we are the epitome of civility and respectability to colleagues and to the citizens that we represent,” she said.

The full video of the panel discussion can be watched here.

nextSunburn — The morning read of what’s hot in Florida politics — 4.21.22