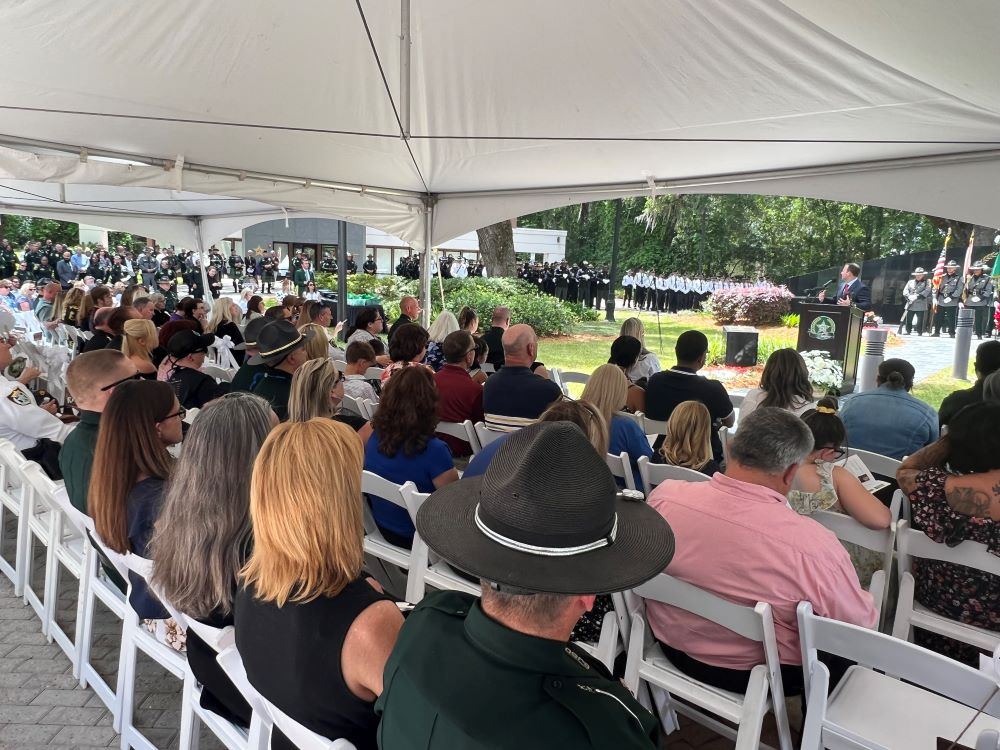 'Daily, these men and women put on a uniform, a gun and a badge to enforce the laws that we as citizens deem are important to protect us all.'

The Florida Sheriffs Association (FSA) held a ceremony Monday to honor 30 Sheriff’s officers who died in the line of duty, most of whom died in 2021.

The ceremony marked the adding of the officer’s names to the FSA’s memorial wall, which honors the 418 Sheriff’s deputies who died in the line of duty from 1844 to 2021. It was attended by family of the deceased, local and state political officials, the Sheriffs of almost every county, and hundreds of Sheriff’s officers from across the state.

Near the beginning of the event, McCallum said 63 out of Florida’s 67 counties have at least one name on the wall. He said their family members know their sacrifice.

“The families who have loved ones on this wall knew that their deputy dedicated each day of their life to protect others,” McCallum said. “This life of uncertainty is the reason our law enforcement officers are respected. Daily, these men and women put on a uniform, a gun and a badge to enforce the laws that we as citizens deem are important to protect us all.”

“We have had no better friend, a better supporter of law enforcement in this state as a legislator, than Speaker Chris Sprowls,” he said.

Sprowls said it has been a difficult year and a half for law enforcement. He said ceremonies like the one he was speaking at reminded him of the ones his father, who was a law enforcement officer, took him to as a child.

“I thought my dad took me when I was a little kid because he felt like he was kindred spirits with every law enforcement officer, even if they didn’t know him. What took me a little bit longer to realize as I got older, is that it wasn’t just about being a kindred spirit or being part of a family, that there was a larger lesson there. That he was trying to teach me a lesson about honor, sacrifice, and devotion,” Sprowls said.

He said the memorial wall isn’t just a place to remember those who gave their lives, but to mark their heroism and make it aspirational to others.

After the speeches, family members of the deceased were escorted up by the Sheriff from their county to receive a bouquet of flowers and a plaque that contained an etching of their relative’s name. The audience was silent as the mourners walked up one by one, stopping for a photo with McCallum and fighting back tears.

Most of the Sheriff’s officers who died in 2021 were killed by COVID-19. Twenty-three of the officers died after contracting the virus while working. Four died of heart attacks, three in vehicle accidents or assaults and one from gunfire.

These are the Sheriff’s officers who were honored: