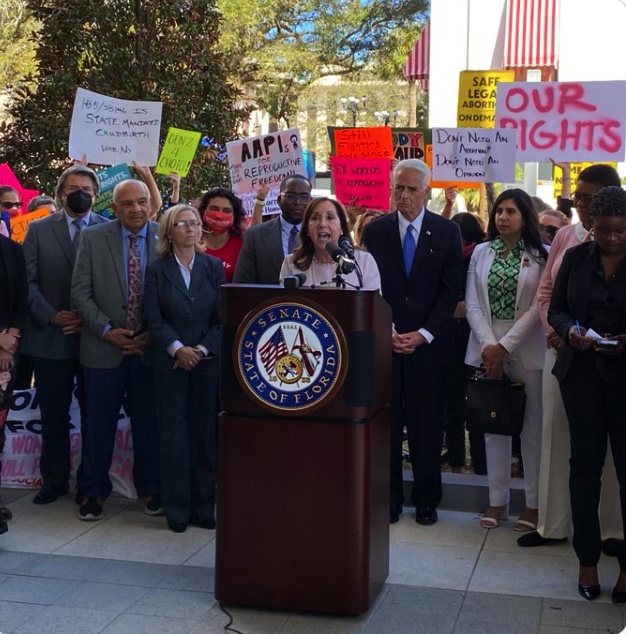 Florida’s 15-week ban on abortion hasn’t gone into effect yet, but Sen. Lori Berman said Wednesday she’s already drafted a law that will roll it back.

The Delray Beach Democrat was galvanized to immediate action after a Supreme Court opinion leaked Monday night indicating the court will uphold the Mississippi law that bans abortions after the 15th week of pregnancy. Florida’s ban is based on Mississippi’s.

“We need to act now,” Berman said of the draft opinion that blew up into rallies and angry screeds against the leaker on Tuesday. “This is a warning. We don’t know for sure what the final opinion will look like, but we need to raise our voices and say this is not acceptable in 2022.”

The bill Berman drafted is similar to the legislation she filed last Session, building on wording in the state constitution that has a stronger right to privacy than the U.S. Constitution, she says. This new draft, however, has lines that repeal the law (HB 5) that Gov. Ron DeSantis signed April 14.

“I wanted to make sure that we have this all ready so that when I get re-elected, hopefully in November, we will file it very quickly,” Berman said.

No one has yet filed to challenge Berman, the state Elections website shows.

Berman’s 2022 Session bill (SB 1036) that prohibited any person, state or local government from interfering with the right to get an abortion drew a House companion (HB 709) that Rep. Ben Diamond sponsored, but neither piece of legislation made it out of committee.

The bill, she said Wednesday, is “all the more necessary today.”

Berman said that reading the leaked draft opinion aroused her concern that more privacy rights may be on the chopping block, such as LBGTQ marriages and access to birth control.

“They are making it a much broader opinion, looking at taking away privacy rights,” Berman said on the wording.

Berman said that women and children have always been at the top of her priority list.

“Abortion is health care, so it’s extraordinarily important to women’s wellbeing that they have access to health care,” she said.

previousVal Demings: 'We're going to talk about' abortion rights and 'what's next'