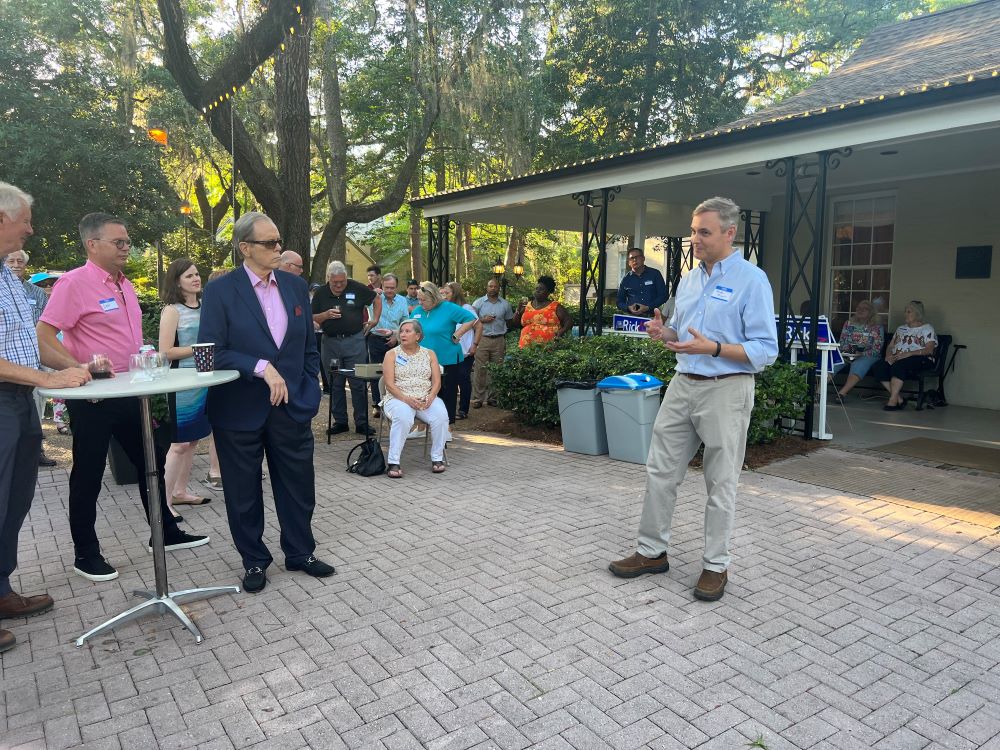 'What I think is important about being a local elected official in Leon County is to listen to the people that you work for.'

Leon County Commissioner Rick Minor discussed his values on the Commission and why he changed his mind about supporting a $27 million Blueprint allocation during the largest event of his campaign so far Thursday.

The gathering, held at Dorothy B. Oven Park, hosted dozens of supporters and guests including Tallahassee City Commissioner Curtis Richardson. Minor is currently facing two challengers, Joey Lamar and Damon Victor for the District 3 seat, which encompasses much of northwest Leon County.

Before Minor made his remarks, adult attendees enjoyed drinks and hors d’oeuvres under the shade of the park’s slash pine and oak trees. Madeline, one of Minor’s daughters, zig-zagged the nearby field with a bubble wand while her father danced between his constituents, shaking hands and giving his pitch for re-election.

Minor opened his remarks by recalling what voters would tell him when they left polling places in 2018 after voting for him for public office for the first time.

“On the way out, they would say, ‘I voted for you Rick Minor. Make it count,” he said. “I’ve never forgotten that. Because at the crux of it, if someone is fortunate enough to have the trust of people and get elected to a local government office, you’re entrusted by them to work for them.”

One of the times Minor said he listened to voters was when he changed his mind and reversed his support of a $27 million Blueprint allocation to fund repairs to Florida State University’s Doak Campbell stadium. While Minor supported the allocation in early votes, he reversed his support beginning in November, vocally opposing and voting against the funding. The funding was still approved in February.

Minor told the crowd he originally supported the funding because of the economic driver FSU is to the area, but changed his mind because of the public’s response after the first vote.

“I think the public started to really listen and think about the issue, because everyone and their mother contacted me after that first vote,” Minor said. “I’m not exaggerating here, the ratio of the folks that were contacting me saying they oppose the stadium funding was 25 to 1 — 25 against the funding for every one person that was in favor of it.”

The Commissioner said he slept very well after changing his position because he made the decision Leon County voters wanted and believed their reasons for opposing it were good.

The day after the event, Minor’s campaign also released an ad ahead of Mother’s Day expressing his support for women’s reproductive rights amid the leaked Supreme Court opinion that could overturn Roe v. Wade.

“I trust women to make that decision for themselves and I urge everyone, on this Mother’s Day, to stand up for the reproductive rights of all women,” Minor said.