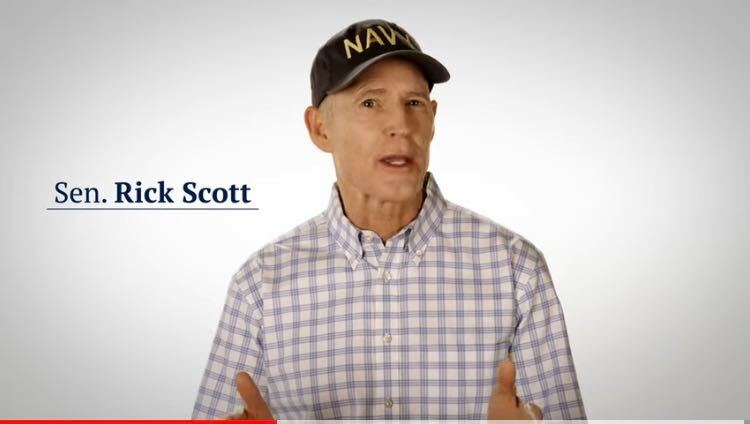 'How do you destroy America’s economy? Look around.'

Sen. Rick Scott continues to get plenty of earned media for his “11-point plan to rescue America,” but on Friday, he kicked off a round of paid spots making his case in distilled form.

The new 30-second spot goes after President Joe Biden and is entitled “Biden vs. Scott.” The spot encapsulates the recent back-and-forth between the President and Scott over the Senator’s policy proposals.

The ad begins with soundbites of Biden castigating Scott, and then the Senator offers a rejoinder in the closing.

“How do you destroy America’s economy? Look around. Joe Biden and the woke Democrats are doing it. I’m Rick Scott. I’ve got a plan to rescue our country. Washington hates it. That’s how you know it’s good. Read the plan at RescueAmerica.com. I approve this message,” Scott urged.

The ad buy starts Friday, and likely ensures Scott and his policy proposals will be in the spotlight for at least a while longer.

President Biden has invoked what he calls Scott’s “ultra-MAGA agenda“ as a cautionary tale of how things could be worse under Republican leadership, as his administration has come under fire for rampant inflation.

Biden has focused on Scott’s proposals to make sure more people paid income tax, demonstrating what Scott called “skin in the game,” as well as potential reviews that could sunset programs like Medicare and Social Security.

Tuesday saw Biden give a speech at the White House where he bashed the plan yet again, insulting Scott when asked about the Senator’s suggestion that Biden resign.

“I think the man has a problem,” Biden said.

Scott spent much of the rest of Tuesday trashing Biden on various media hits, including a Fox News segment where he said Biden was “confusing” and had “no plan.”

Scott also on Tuesday invited Biden to Florida to “debate” inflation on Tuesday, as the President spoke.

“I’m glad we’re having a discussion about Joe Biden’s inflation and the impact it’s having on hardworking Americans. We know that Joe Biden can be rolled up to the podium and give a speech from a teleprompter — albeit with a notable amount of rambling incoherence. But I believe the American people deserve a real debate on this issue,” Scott urged.

The “real debate” likely won’t happen, so Scott’s ad buy will have to stand in as the next best thing.

Democrats have their own ads hitting Scott, including a digital buy currently targeting senior citizens in Florida.

See the new Scott ad below.