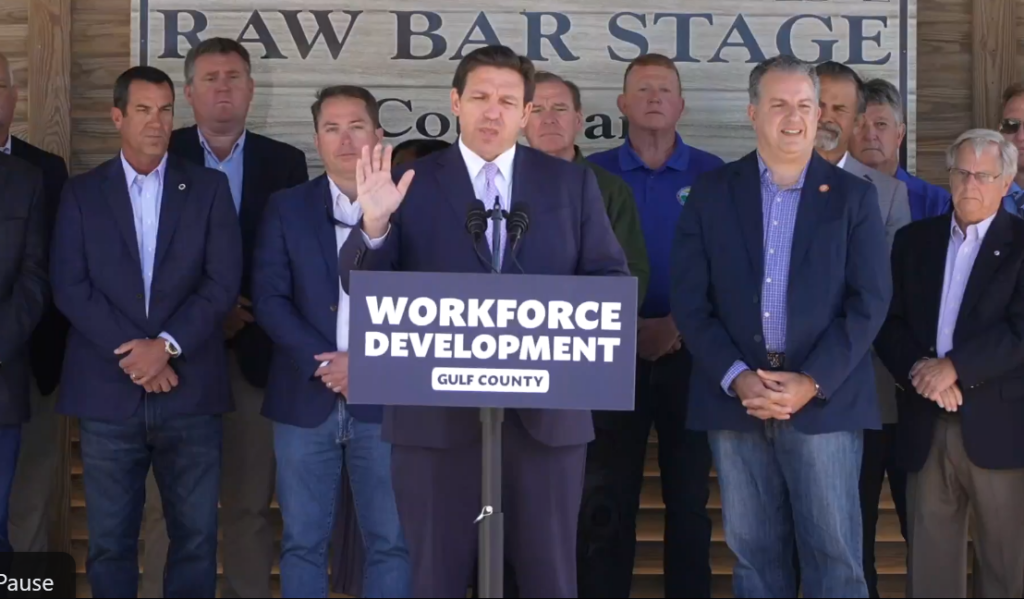 Democrats called DeSantis a 'phony' for making use of federal spending he's condemned.

Speaking in Mayo in Lafayette County on Wednesday, the Republican Governor said he would approve $400 million for the Broadband Opportunity Program and $30 million from the Rural Infrastructure Fund. DeSantis is expected to sign and issue vetoes on lawmakers’ $112.1 billion proposed budget by the end of June.

Funding for the Broadband Opportunity Program will come from the federal Coronavirus State Fiscal Recovery Funds program passed as part of President Joe Biden’s American Rescue Plan. The broadband program, run by the Department of Economic Opportunity (DEO) will extend high speed internet service to unserved parts of the state.

For the Rural Infrastructure Fund, also operated by DEO, $25 million will come from the federal pot. Another $5 million in state trust funds will benefit Calhoun, Gadsden, Holmes, Jackson, Liberty and Washington counties, which were hit hard by Hurricane Michael.

The Rural Infrastructure Fund provides support for rural communities by improving infrastructure and expanding the local workforce, DeSantis said. Per the Legislature, the fund is designed to encourage job creation, capital investment and the strengthening and diversification of rural economies by promoting tourism, trade and economic development.

“These are great communities where people can do more manufacturing, all this great stuff,” DeSantis said. “We want to make sure that we’re doing our part at the state level to help with that.”

“Ron DeSantis has repeatedly criticized President Biden’s American Rescue Plan, siding with Florida Republicans Marco Rubio and Rick Scott to oppose critical funding that has already created hundreds of thousands of good-paying jobs, reopened schools, and made this economic recovery possible,” Reuther said. “Once again, phony Ron DeSantis will do anything to further his political ambitions, even if it means taking credit for the results of legislation that he called ‘Washington at its worst.'”

In response to FDP’s statement, DeSantis Communications Director Taryn Fenske told Florida Politics the Governor has criticized the federal spending for driving inflation but said he would accept funds that are made available to Florida.

“Their constituents across the state appreciate Florida’s infrastructure improvements in rural Florida,” Fenske said of Democrats.

In the past, DeSantis has defended his decision to accept COVID-19 relief dollars because the federal government would send those funds to other states if Florida doesn’t spend them.

“In Florida, we actually guard people’s money well,” DeSantis said. “We don’t print money that we don’t have. We spend reasonably, and the result is we have the biggest budget surplus we’ve ever had in the history of the state, right now.”

Later in Gilchrist County, DeSantis announced he would sign $23.3 million for that county, with $18.2 million for road resurfacing, $4.7 million for the Florida Department of Transportation’s Small County Outreach Program infrastructure repairs program, and $370,000 in local law enforcement salary increases.